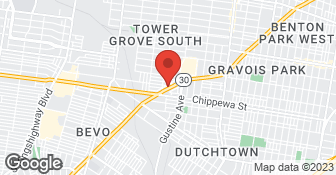 We have a really nice all leather sofa that was in need of repair. There were several small rips and tears in the arm of the sofa. We also had problems with some discoloration in several spots. We honestly thought we were either going to have to live with these problems or buy new furniture, but then we found St Louis Leather Repair. We read the reviews and watched some of their videos on Youtube and decided to give them a try. We called and left a message explaining our problem. They were very prompt in returning our call. We sent them some photos of the problems per their request and from that they were able to give us a bid. We agreed on the price and set up an appointment for the next week. They did ask that we move the sofa to the garage which we did. They arrived on time for the appointment and we had a brief discussion on what needed to be done. When I went out to see how things were going about halfway thru the appointment, I couldn't believe my eyes. The rips and tears were gone. There was no more discoloration either. It's hard to believe it's the same sofa. The transformation was amazing. Needless to say, we are very happy with their work.

Description of Work
He repaired some rips and tears in our leather sofa and also color matched some discoloration issues on the leather sofa.

Amazing job! Repaired rips on a Italian leather couch. Could not even tell that repairs had been done! Doc and his assistant were extremely professional. Gave estimate over phone after emailing some photos of the leather sofa needing repair. Actual price was exactly as quoted on the phone. Would definitely use this service again! Extremely professional. Doc really knows what he is doing.

Description of Work
Repaired rips on seat of leather couch.

Doc did a wonderful job repairing the items and staining them. He was great to work with regarding getting to the exact color that I wanted the pieces re-stained. He was reasonable in his pricing, punctual and professional in his dealings and an expert at his craft.

Doc and his crew did an outstanding job on repairing and recoloring our sofa. I had sent him cell phone picture of the sofa, which did not represent how red the sofa was. As soon as he saw it, he realized the job would take all day instead of the 4 hours he estimated. I had the choice of calling the work off or negotiate the price for a full day job and he was very fair. Normally a job of that magnitude would have cost several hundred more than we agree-to. I thought is was a very fair compromise. They still went all out! Pigment does not always look on a colored surface they way it looks on white. The chocolate brown color, when applied to my sofa, actually looked grey. Doc manually remixed these very expensive dyes until he found a formula that looked right. The final result was outstanding. Better than I would have expected. The only thing that might make it easier on the customer is moving the furniture. He doesn't move furniture and doesn't have a workshop. The job is done on-site, meaning I was responsible to move the sofa to our garage and back again. I knew this in advance and agreed to the condition.

Description of Work
Repaired torn and worn areas in a leather sofa. Changed the color of the sofa from a redish brown to a chocolate brown.

Fantastic! Great attention to detail, thorough, prompt and super nice. Really impressed with the quality of the work. When our couch is ready for reconditioning/redyeing, I'll definitely call. I had such a hard time finding a place that would repair a leather couch, and we're so happy with the work they did.

Description of Work
Auto Interior Doctors repaired our leather couch, which had 2 seams that were coming apart.

We are located in California and do not offer regular dry-cleaning services. Premier is the nation's finest suede and leather garment cleaner. WE PREFER THAT YOU CALL US DIRECTLY WITH ANY REQUESTS OR QUESTIONS AT (949) 244-0943, OR E-MAIL US AT: leathergods@aol.com. IF YOU EMAIL US, PLEASE INCLUDE YOUR TELEPHONE NUMBER. Highly recommended by the finest retail stores in the U.S., including Nordstrom, Armani, Tom Ford, Gene Hiller, etc. Thousands of clients from all over the country who demand the finest quality and workmanship, ship garments to us directly for cleaning, dyeing, and repairs. Other services: purses cleaned and re-dyed, alterations and repairs, re-weaving of fabric garments, and area rug cleaning. Furniture cleaning and dyeing limited to Los Angeles, Orange, and San Diego Counties.  …

Kwik Dry Carpet Care's mission is to educate our community on how to take the absolute best care of their carpeting, rugs, ceramic tile and grout, wood floors, air ducts and upholstery. We have committed ourselves to the highest level of integrity, education, customer service and cleaning procedures. This ensures that you will experience a lasting enjoyment of clean, healthy carpets, floors and fabrics.  …

Custom furniture refinishing, repair and upholstery. Prices are based on individual jobs -- The best thing to do is visit our website customfurnitureworksstl.com. There you will find prices, time frames, etc. Or, please send a photo to our email, cfwgibbs@hotmail.com, and we will be happy to give you ballpark pricing and time frames -- Depending on what work is needed, work can be done in home or in shop -- Payment is C.O.D. -- Member of the BBB -- 14 employees  …

Licensed
Bonded
Insured
All statements concerning insurance, licenses, and bonds are informational only, and are self-reported. Since insurance, licenses and bonds can expire and can be cancelled, homeowners should always check such information for themselves.To find more licensing information for your state, visit our Find Licensing Requirements page.
General Information
Free Estimates
No
Eco-Friendly Accreditations
No
Payment Options
Senior Discount
Emergency Service
Yes
Warranties
Yes

Moving furniture in or out of location.

St Louis Leather Repair is currently rated 5 overall out of 5.

No, St Louis Leather Repair does not offer eco-friendly accreditations.

Are there any services St Louis Leather Repair does not offer?

Moving furniture in or out of location.