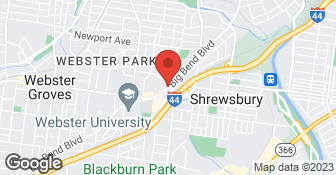 Welcome to Climate Masters Inc, an independent, family-owned HVAC contractor, servicing the St. Louis metro area since 1978 from our Webster Groves location! We service and repair all brands of equipment, offer FREE estimates, have professional (certified) installation crews and offer an annual Maintenance Agreement. All installers and service technicians are members of Local 36 (Sheet Metal Workers). Our full-time service manager and service technicians are ready to bring comfort back to your home. Our specialty is installing new or rehabbing existing air conditioning ( and heating ) systems to older homes that have radiator heat. We have successfully installed and/or rehabbed thousands of these systems using our expertise gained through over 37+ years of experience. We believe no job is impossible. We also offer our exclusive Whisper SoftTM system that blends modern design with superior airflow to give you maximum comfort without the typical ugly registers or need for special equipment. Contact us so we can work together and add you to our list of happy Climate Masters Inc. customers...

Great. My former units were OLD, and the furnace stopped working during our cold spring. Of course, I called Climate Masters as I had been with them for over 30 years. They came quickly and recommended I get new units, which I did. When they had the units, they brought them in the back door wearing masks, and went to the basement. I was pleased they were observing Covid-19 procedures. As usual their work was efficient and successful. I hope to stay with them for another 30 years.

They are about the same as everybody else for the price.

Description of Work
They were out sometime last year in the spring to maintain our air conditioner.

Very well. Cleaned up everything and installed a ductless air system that is great!

Climate Masters have been in business for years and they work with old houses. We have a hundred year old house and they have figured out a way to put regular central air into the house without disrupting the structure. They do an excellent job of updating and they've always kept our older systems working and when it was time to replace, they did a beautiful job with that. I've been very pleased.

Description of Work
Clean and inspect heating and cooling.

I highly recommend them. I have a boiler in my house and they know about boilers. The workers were fine.

Description of Work
I've used Climate Masters. I had them for 20 years. I saw them a month ago. They fixed or replaced the capacitor.

I highly recommend them. I have a boiler in my house and they know about boilers. The workers were fine.

Description of Work
I've used Climate Masters. I had them for 20 years. They did heating and AC.

Tom made contact very quickly. We made an appointment and walked through the house upstairs and in the basement. He took measurements, made a sketch of the space, and took a read on the ceiling temperature. We discussed our options and were given two prices: one if we controlled the schedule and one if they controlled the schedule. Tom asked us to think about it and ask questions. So we did, and he responded quickly every time. We thought our new system would be better if we placed it in our hall closet, but Tom thought there was enough hidden space in the back room to put it in the wall, but agreed to use the closet. Climate Masters had a week open up so we took it which meant we received the discount. Tom came over again to sign the contract and to pick up the deposit; we passed a key over to him at that point too. He was there the first day and called us with the technical teams recommendation which was to put it in the wall cavity because there was actually more space there--we agreed and they were right. They cleaned up every day, almost no dust at all. They neatly covered the wall access panels. The system installed is quieter than the downstairs system. And they removed the two window units for us. Part of the contract was to add insulation to the attic and wall spaces. There was a bit of confusion as to where the batting was supposed to be placed, but the insulation subcontractor straightened it out and what was estimated to be a 7 hour job ended up to only be a 3 hour job with excellent application. Very nice subcontractor who explained what had to be done to get the insulation in place. One of the Climate Masters managers came over during the insulation work and checked in with the insulation contractor to make sure everything was going ok. Our key was also passed back to us. After the job was finished, we passed the balance of payment. Climate Masters installed a once-every-replace filter. We received a rebate for using that filter type which made it essentially cost $50.00. Tom came over one more time and inspected the all the work done, even checking the temperature on the ceiling to make sure the insulation was in properly in place--which is was, well placed. He also showed us the double safety system put in place on the unit to make sure that if there is a blockage, the water will not overfill the drip pan and ruin our plaster ceilings. It took us a few days to get used to not having hotspots and the humidity being lower upstairs. Having our windows back is awesome and quieter upstairs We also were able to remove all of the ceiling fans--the impact of this is better lighting and more headroom. The temperature control has also allowed us to do more with the space upstairs. We are very pleased with the work and now have a service contract on our boiler heating system, the downstairs air conditioner and one for our new system and are planning to install a once-every-replace filter the downstairs unit. One more surprise for us: our Ameren bill came the other day, and it showed the this past month of usage was less than two months earlier which had the same average temperature. We are now saving money on our electric bill too. Thanks so much to Tom and Climate Masters! In case you are wondering about the price, it was reasonable for the work done, the professionalism, and the results--as we have discovered, we will recover it in lower utility bills.

Description of Work
Installed a central air system upstairs in a 1935 home.

Wow ! Thank you [Member name] for you're thorough and fantastic comments about us. I am sorry it took me so long to respond to them. I need to look at this website more often. Thanks again Tom Becker
1.0

Climate masters made an appointment with me that was supposed to be on a Friday between 12 and two they never showed up for their appointment nor did they call. When they were contacted by me I explained that our air conditioning system wasnt working properly and I needed someone to come out immediately, they only appointment they had available was 2 to 3 weeks later after the two weeks past nobody called or came by the house for the scheduled appointment. I contacted them and ask them why they hadnt showed up they accused me of being wrong saying I had the wrong date accused me of not answering the phone and told me basically it was my problem they then schedule another appointment for June 25th 2015 at between 12 and 2 p.m. Again did not call between the times or stop by. At 230 they contacted me and told me they were coming by and I needed to be there at the house I explain to them that the appointment was from 12 to 2 and that I was not available at this time. The woman secretary claims that I was wrong again about the time and that she personally schedule of the times and that we my wife and I were wrong again she then refused to send another repairman out stating she does not like to deal with people like us, us being renters and African American. This company does not like to service people and keep their word,they bend over backwards to get your business but after that youre done and when they find out that your African American they will not treat you properly be warned stay away from this company they are horrible when I called to get the name of the owner the secretary stated his name and then continue to state he wouldn't want to talk to you because you dont matter.

Description of Work
Climate masters was supposed to come by the house and clean and inspect our air conditioning system.

The yearly maintenance is just that - not much to say - punctual, good service, courteous. The installation of the system 15 years ago was EXCELLENT. Very little mess or disruption. They know what they are doing. The system is very quiet, and works perfectly. I highly recommend Climate Masters.

Description of Work
Yearly maintenance on A/C - Climate Masters installed the system 15 years ago and it has worked PERFECTLY ever since.

Thank you [Member name] for your kind comments. Tom Becker

For 29 years, Bates Electric, Inc. Has proudly served the St. Louis Metro area and surrounding areas. Please contact us to speak with one of our Customer Service Specialists for service rates. ALL OF OUR TECHNICIANS ARE LICENSED, BONDED, AND DEPARTMENT OF LABOR CERTIFIED.  …

Burke Plumbing, LLC has been a family owned and operated business for over 80 years. We are based in St. Charles, MO. 2 EMPLOYEES. NO SUBS. CHARGES BY JOB WITH OPTIONS.  …

Climate Masters Inc is currently rated 4.7 overall out of 5.

No, Climate Masters Inc does not offer free project estimates.

No, Climate Masters Inc does not offer a senior discount.

Are there any services Climate Masters Inc does not offer?