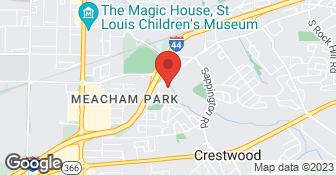 Brinkley Contracting Services is a renovation company that puts the customer first. We are a small company that employs five five full time professional employees from various trades. All work is done in a timely fashion and at very competitive rates. We strive for perfection! Give us a call for a free estimate. (314)304-2090 Thank You, Chris Brinkley ...

I gave Chris two checks, $200 on 3/16/18 and $350 on 3/30/18. He replaced one storm door but left the handle in an incorrect position saying he would be back the next day to finish. he has never returned to do the remainder of the work he agreed to. He had had several different reasons for not returning then on 5/7/18 said he "will not be able to do certain tasks for the time being..." so I asked for $350 of my money back so I could hire someone else. He did not respond so on 5/11/18 I asked that he return my $350 or complete the work by 5/18/18. If he didn't I said I would file a complaint with you and other places he accused me of threatening him and attempting extortion.

It went "fair" until he doubled the price from the orginial estimate. I understand there was extra work and I was okay with paying extra. But then the last day he said I still owed him more money. I wouldn't be so upset however the quality was fair at best once I took a closer look. There are gaps from the tile he cut to where the upper cabinets were placed. There were also gaps that needed to be caulked after the upper cabinets were installed and I had to do that myself. The new dishwasher was placed in crooked. Some trim work was shoddy at best. New plaster was competely uneven. There was a big chunk missing from door trim, where he removed a pantry, and his response was "that was there". A professional would have said something like "this was there but doesn't look right and I can replace this side of the trim for x amount of money" - I would have been okay with that. Additionally, when they demo'd there was a mess that fell to the basement and they just left it there. It actually stopped up the drain that my wash machine drains to. They did show up when they said they would (except one day he was sick) and were pleasant enough. I cannot give a ringing endorsement on the quality of his work.

Description of Work
small kitchen demo of a few cabinets and taking out a pantry. They reran a few electrical outlets and built open uppers (2-36") and a smaller one. They also installed a new dishwasher and slide in gas range and 6 lower cabinets that I painted and bought from home depot.

10 EMPLOYEES. NO SUBS. COST IS DETERMINED BY THE JOB. NO TRAVEL CHARGES. Honest companies cannot compete pricewise with companies that DO NOT pay insurance premiums. Potect yourself by getting a copy of the Certificate of Insurance from whatever company you choose.  …

Gateway Chimney Service, LLC has been in business and serving the St. Louis metro area for over 30 years! Family owned and operated. We are CSIA certified chimney sweeps. Thank you for allowing us to be of service.  …

Brinkley Contracting Services Focuses on all aspects of home repair and home renovations. We do it all!

BRINKLEY CONTRACTING SERVICES is currently rated 2 overall out of 5.

No, BRINKLEY CONTRACTING SERVICES does not offer eco-friendly accreditations.

No, BRINKLEY CONTRACTING SERVICES does not offer a senior discount.

BRINKLEY CONTRACTING SERVICES offers the following services: Brinkley Contracting Services Focuses on all aspects of home repair and home renovations. We do it all!