All Purpose Sewer and Drain 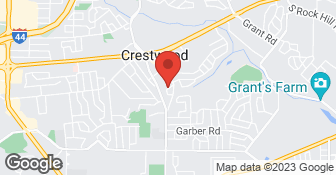 WE SPECIALIZE IN WATER HEATER INSTALLATION AND REPAIRS, SEWER AND DRAIN CLEANING AND REPAIRS, AS WELL AS GENERAL PLUMBING REPAIRS (OLD OR NEW)...

Lawn Systems, Inc. is family owned and has been serving the St. Louis area in the green industry since 1988. We specialize in irrigation, landscape lighting, landscaping and drainage solutions. Call the office at 636-349-6640 to schedule a service appointment or to request a bid. Please visit our website at www.lawnsystem.com  …

Additional DBA - Allen Irrigation & Lawn Care Inc. Allen Outdoor Solutions, Inc. has provided full service irrigation, landscape, and lawn care service throughout the St. Louis area for over 20 years. Our projects range in size, from small residential designs to large commercial projects. No matter what your vision, we can take care of every aspect of your outdoor project. All of our work is backed and fully warranted to your satisfaction.  …

Now offering one hour service for heating and air conditioning service. We are factory authorized to service all major brands and we offer all the top products in the industry. Year to year we win numerous awards for customer service and technical skill. Our team is dedicated to providing you with the attention to detail and customer service that can create a whole new level of comfort and energy savings. Led by owner Brett Nejmanowski, our company provides expert sales, service and installation. We have a team of technicians that are fully qualified to help you select the comfort system that best fits your home and your budget. We serve the greater St Louis area, and are a no-nonsense, everything-on-the -table kind of heating and cooling company. Our written 100% satisfaction guarantee is behind all the work we do – if you’re not happy with our heating and cooling services for any reason, we’ll make it right or give your money back, no questions asked! No matter if it is a furnace or AC repair, furnace and AC installation, heat pump installation, or anything heating and air conditioning-related, you will have our guarantee. Along with the services we provide, we’re also passionate about our duty to protect the environment and our social responsibility to the community. In our daily practices, we utilize earth-friendly products and methods to ensure clean outdoor and safe indoor environments for the people we serve. We regularly give back to the community through volunteer work and financial donations. Among the charitable organizations we support are Safe Kids USA, National Multiple Sclerosis Society, Autism Speaks and the Sheriffs’ Association. Financing options available. Numerous rebate programs available. Government subsidized programs available to qualifying homes. Additional phone number (618) 717-0707 Also servicing clients from both 14248 F Manchester Rd, Ste. 190, Manchester MO, 63011 & 110 West Main St., Ste. A, Belleville IL, 62220!  …

The job included cutting a section of the wall to access the cracked PVC tee, removing the broken tee and installing a replacement tee. Daniel was prompt, efficient and cleaned up his work space. Didn't have other quotes to compare due to no return calls from other plumbing companies but price seemed reasonable. Would definitely use this company again!

I've use them for 20 years. they are family owned business, they do outstanding job and their rates are always extremely reasonable.

Description of Work
They installed a bathroom faucet.

The service itself was great. My technician was here when promised and he was friendly and got the work done quickly. He also did another line inside that had been backing up (for an additional fee of course). The only issue I had was that when he was outside, he removed a huge rope-like root that had caused the blockage and he did not remove it when he left. I came across it the next day when I went around the side of the house and there it was in my side yard. It might have partially been the confusion of doing the extra line, or partially because there was a huge thunderstorm brewing and he was trying to finish up the outside work quickly, but we had to deal with it and it was pretty gross. With other services I've used, they have taken things like that with them for disposal. I would 100% hire them again though--I'd just clarify or double-check before I signed off on the paperwork.

Roger ran a cable under the house and unplugged the stoppage. Luckily that is all it was.

Description of Work
Had a stopped up sewer line. Toilets were backing up.

I have used All Purpose Sewer and Drain twice now in the past 2 weeks. The first trip was to diagnose a water leak in the laundry room. Daniel showed up on the same day slightly earlier than originally promised (1:30pm vs. 2:00pm) and determined that the hot water heater was leaking. He called me, explained the problem, and asked how I wanted to proceed. I told him to replace the hot water heater, which he did on the same day. The problem was fixed. The second trip occurred today. My tenant informed me that the hall bathroom shower had very little water pressure. I called All Purpose Sewer and Drain and they were out there to fix it. (Turns out, it was just a clogged shower head.) When I asked how much I owed, they told me that this trip was complimentary since they were already in the area and were only at my house for a few minutes. Overall, I am very happy with the work performed (this is a rental unit) and will definitely use them again in the future (both for my rental units and for my own home). I highly recommend both Roger and Daniel!

Excellent. The owners son work until he loosen the plug spot even climbing down into drain. Have given out his name to several friends. Very professional

Roger is amazing. He has saved us on many occasions. We own an 85 year old home and we're always discovering issues that need addressing. Roger is always quick to respond, he and his son both do impeccable work, and they are the type of reliable tradesmen you'd be thankful to have in your contacts list and working in your home. He's rushed out in multiple emergency situations, and he's also the one we will call when we finally get to demo some of these old bathrooms and start from scratch. Top notch work, professional person, extremely fair prices. We recently had an old bathroom sink back up so we opened the cabinet to look at the pipe below and it literally broke off of the wall. Roger fit us into his schedule quickly and in a very short amount of time, he was able to repair the problem. I can't say enough great things about this company because this type of reliable person is nearly impossible to find these days. We're grateful for his excellent work!

Description of Work
Replace bathroom plumbing between the sink and wall.

Great 👍 they were prompt and I would hire again.

Fast, quick, and awesome!! Will definitely use again. Friendly and professional.

They were called on a emergency. They made sure to fit us in, I can't rate them high enough. The responsiveness and professionalism stood out, they saved us and gave us water. They cared and responded, worked extra to fit us in and fix the pipes.

Description of Work
They were out to fix frozen pipes.

WE SPECIALIZE IN WATER HEATER INSTALLATION AND REPAIRS, SEWER AND DRAIN CLEANING AND REPAIRS, AS WELL AS GENERAL PLUMBING REPAIRS (OLD OR NEW)