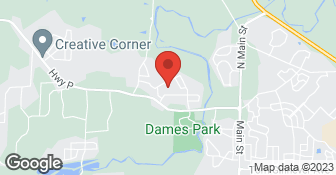 I am a firm believer of providing my customers with excellent work and great customer service. I've been told many times by my customers that I am very meticulous and detailed oriented. K&S Lawn Maintenance strives to keep your lawn beautiful and we promise to make a difference. Let us put your lawn on a monthly maintenance program to keep it healthy & green. We offer package deals and affordable monthly payment plans to fit your needs....

Kevin came out to give us an estimate and discuss our needs the day after we called, and was friendly and knowledgeable. The team from K&S did a great job removing our existing lawn, regrading the area, installing new sod, and completely cleaning up the area all in one day - and right before a couple days of rain, exactly as we'd hoped for. It did take some time to get the job scheduled due to having to wait for a locator to mark up the site; if there's any nitpick to be had, it's that we would have liked to be kept more in the loop without needing to call K&S for updates. The new sod was also a bit on the yellowish side, but that should take care of itself as the grass takes root. All in all, we were very happy with the job and will definitely hire them in the future.

Fantastic! Kevin, Sammy and their crew are incredible and skillful workers. They were prompt, courteous, professional and careful. I've always been delighted with their work and amazed at how quickly they get the job done. They left my yard immaculate and they were reasonably priced.

The work was scheduled within a couple days of contacting K&S. That day, they team arrived on time and to work. It is a small lot, so with and hour and twenty minutes, the work was complete. I am happy with the work the team did.

Thx for the opportunity!!! Please keep in touch
5.0

Kevin and his team completely remodeled the landscaping around the house. They removed the old landscaping, installed new drainage tile and added new landscape lighting. They completed everything in a timely and efficient manner. Excellent job! I would highly recommend them!

Description of Work
Landscaping the front and side yards

Extremely responsive. They started the same day as the quote was given. They worked quickly and did a great job. I'd definitely use them again and would highly recommend them to you.

Description of Work
New driveway border and front of the house landscaping.

Kevin was amazing, came out and bid the job, and had people on site within three days(weekend in between) and he restored my yard to a condition that I haven't been able to do in years. Did amazing work, finished in one day, and hauled everything away. My neighbors were amazed. ABSOLUTELY SPEECHLESS Thank you kevin .

I had mulch bed work done in April. Way over priced for quality. The mulch was practically dirt. It was matted and thin. They told us to rake it after it rained to spread it around. It melted like mud . While spreading I noticed a bunch of bare spots. I called and was told someone would be by the next day to spread more. They never came. I called back a week or two later and left a message saying no one came out. I never received a call back so again, 2 weeks later, I called and said I wanted a portion of the money I paid because they never came back out and they did not spread enough mulch and because the quality of the mulch was terrible. They moved and replanted 5 plants and two of them died. There are patches of weed barrier showing through. It's so thin, you can't spread it to those spots without revealing another spot. Kevin was argumentative and told me they did come back out. I asked him why he never called back and I told him I was home the entire day they said they were coming back and nobody came. The exact same bare spots were there. He said he wasn't a liar and they did come out and provided the services I purchased. I guess for $1000 for 2 tiny mulch beds (maybe cost $200 in mulch) I was expecting them to provide a quality level mulch, a good layer of mulch that sufficiently covers the entire area, not to kill my plants and to be responsive to my calls instead of not calling back and then when I reach him a month later, he argues with me about the quality. Kevin texted me pictures "showing " they came back out and laid more mulch, but the pictures were from when they initially laid the mulch. I could tell based on where my yard bench and other decorations were moved when they finished the first time. The picture even showed us getting out of our car the day they finished. I had really high hopes about this company because Kevin was so personable, however the quality was unbelievably awful and I paid a lot just to lay garbage mulch. For a month, I tried to speak with them about resolving the situation in a courteous manner. Kevin finally called me at the end, after I said I wanted some (not all, because I recognize that is not fair as they did provide a product and service) money back. He called, argued with me, then hung up on me. It seriously sounds like I'm making this up, but truly, the quality, quantity and respect I was shown was terrible. I feel as though I was taken advantage of and treated with disrespect. This is a budget company that scams people when they can. The work they do is not worth the money. Any issues would be met with false concern and ultimately disrespect.

I claimed a Deal (Up to 4 Hours of Lawn or Landscape Work - $169) on June 6 and approved the "quote" with K&S on June 8; however, I did not hear from them after that. I followed up with an email on June 13 asking when the work would be scheduled with no response. I called them on June 19 and asked when the work would be performed and whoever answered the call said "next week". They did not show up or try to contact me. On June 28, I sent yet another email and informed them that I would be canceling the job if I did not hear from them during the week and of course I didn't. So, it did not go well. It was a wasted month of my time.

Description of Work
Services requested included primarily shrub trimming and general lawn maintenance to improve curb appeal. Work was not performed due to unresponsiveness of company.

The job was too minor for the company.

Description of Work
I needed someone to tell what was wrong with my lawn.

We provide hardscapes & landscaping services in and around St. Charles county. Specializing in design & installation. We offer the best solutions for your outdoor living areas. Our team is 100% focused on customer satisfaction and doing the best possible job.  …

*5% off between now and March 1, 2021* Award winning. Sam's Retaining Walls and Home Repair has over 20 years of experience in Landscaping, Masonry, Foundation repair, Drainage,Hardscaping, and Paving. Winner of the Super Service Award 10 years in a row. We now offer consulting. Sorry, but we do not work inside the city limits of St. Louis Mo. We only service the county areas. Office number 636-938-1507  …

No License Required for Trade
Insured
All statements concerning insurance, licenses, and bonds are informational only, and are self-reported. Since insurance, licenses and bonds can expire and can be cancelled, homeowners should always check such information for themselves.To find more licensing information for your state, visit our Find Licensing Requirements page.
General Information
Free Estimates
Yes
Eco-Friendly Accreditations
No
Payment Options
Visa, MasterCard, American Express, Discover, Check, PayPal
Senior Discount
15%
Warranties
No

K&S Lawn Maintenance is currently rated 4.6 overall out of 5.

No, K&S Lawn Maintenance does not offer eco-friendly accreditations.

No, K&S Lawn Maintenance does not offer a senior discount.

No, K&S Lawn Maintenance does not offer warranties.