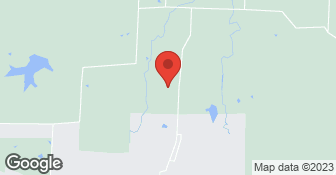 Nationally known and locally owned by our A-1 National Franchise Network, A-1 Concrete Leveling is a fully insured concrete contractor that is dedicated to providing you with the highest quality concrete services. Additional DBA - Lonergan Enterprises Inc....

For 30 plus years, our lead foreman has been laying brick. We're privileged to have Randy, who built one of the very first paver driveway jobs in Kansas City before outdoor hardscape was on the map. And he taught the owner of Outlook Hardscape everything he knows. The care and craftsmanship Matt, Randy and their crews put into our hardscape has been something they've done for decades together. Our competitive price matches the quality of product you will receive as we pride ourselves in doing it right the first time. And our Angie's List members boast of our friendly crews and clean work sites. We not only want you to relax during the process but help you relax after a long day at work, coming home to your new outdoor oasis. Let us help you design beauty and comfort with our quality hardscape. We look forward to meeting you.  …

Since 2001, Foundation 1 has created a strong reputation based on honesty, integrity, and fair pricing. If you have cracks in your drywall, sticking doors, or sloping floors call us about our Impact Piering systems. If you have cracked, leaning, and bowing foundation walls call us about our Strong Arm Wall Bracing System. If your foundation walls and floor leak every time it rains call us about our Dura Dry Waterproofing Systems. We offer a Free consultation and back our work with lifetime warranties. Call us for more information and find out why more people "Rest Their Foundation, On Our Reputation"  …

Expert Foundation Repair and Waterproofing. Free Estimates. Transferable Lifetime Warranties. Engineered Repair Methods. We were founded because as a General Contractor and Real Estate Investor, our founder searched for an honest foundation company that fixed issues permanently and was honest in its approach. It didn't really exist. So after consulting the best Engineers and Product specialists and after repairing over $8 million in homes in the last few years alone, Smart Foundation Systems built the best waterproofing and foundation repair methods in the industry with an approach that lets you be in the drivers seat. We have also been recognized as one of the top 10 foundation repair companies in Kansas City.  …

Efficient workers. The sidewalk and driveway look much better. They cleaned up carefully. The cost was a lot less than it would have been to replace the sections of concrete.

Description of Work
Leveling sections of sidewalk and driveway

Great! Responded promptly to our inquiry. Able to schedule an estimate visit quickly. Arrived promptly to complete the work as scheduled and even called ahead to alert us to estimated time of arrival based on traffic conditions. Staff that did the work were courteous and professional.

Description of Work
Had a void under portion driveway that need to be filled before it started sinking. Also had an area in front sidewalk where concrete had broken out creating a hole that needed repair.

crew did a great job, i'm not tripping anymore due to unleveled concrete, thank you! prompt, easy to schedule and work with. will do a great job for you

Thank you for your business [Member Name Removed]!
5.0

Perfect. Both workers were friendly and knowledgeable cleaning up afterwards. Highly reccommend A-1

Description of Work
Concrete pad supporting air conditioner needed to be raised and leveled after it had settle and draining rain waters towards the foundation.

The project was completed on time and the quality of the work was good. I had an issue with the caulking between the sidewalk and the steps but they came back and recaulked next time they were in the area. I got a recorded message every time I called their office but they were fairly quick to return my calls. I would use this company again.

Description of Work
Leveled concrete sidewalk in front of my house.

It looks great. They were actually late getting to the house, but called ahead to let us know, and stayed late into the evening to get the job finished. They were very professional and explained what they were doing. They also allowed us to schedule our appointment over email, which was much more convenient for me. I would definitely hire them again.

Description of Work
They raised our sidewalk, removed pre existing quikcrete, and touched up the front step so everything looked polished.

A1 out of Lee's Summit is a family owned and operated branch of a franchise. The owner, Todd, arrived at our house to provide the estimate. His son and another partner actually performed the work of leveling the concrete. The bid we received was fairly priced, coming in about 10% below the bids of two other contractors including Boss Mudjacking. All companies put their bids in with the caveat that there is no way to fully know how much fill would be needed to level the concrete. The pricing for A1 would have been more expensive in the long run if we needed more than the original truckload that A1 estimated, but we ultimately decided to go with A1 because of the three year guarantee that A1 put on their work (in comparison to the two year guarantee of another bid, and zero guarantee by a third company that bid). We figured if the cost ended up being more for the work, at least the work was guaranteed longer. Todd also was the most professional during the bid. One of the final reasons we decided A1 was because they use a mix of limestone and water to fill the voids, instead of a slurry of concrete and mud. The limestone sets up nicely and we didn't want to weigh whether the dirt fill would settle or wash away again, particularly if companies weren't willing to guarantee it as long. Also A1 advised that to meet their end of the bargain of the guarantee, we also had to agree to fix the reason why the driveway sank in the first place, which was an erosion point on the side of the driveway from which the dirt beneath the driveway washed out. We decided we would build a small, round retaining wall and back fill with dirt to hold the concrete fill in place. The day that the work was performed, which was a few short weeks after the bid, A1 showed up a bit a couple hours later in the morning than I was expecting. But their work ethic quickly made up for it. They worked a full day into the night, nearly 9 hours, to complete the job. They had to leave halfway through the day to refill their truck, which is a 70 mile round trip. Although the owner wasn't one of the crew to actually do our job, we found out that both on the crew had been doing this work for several years and were adept at it. They worked really hard, nonstop, and probably ended up with a 12-14 hour day in total. When they left, we were amazed by how significantly more level our driveway and garage floors were. The next day after everything set up overnight, the driveway fell about 1/2 inch. We called A1 back, they took a look at it, and agreed to come back a few weeks later when they had another job in the area and could use a partial load to boost the level back up to its best spot. They followed through on it with no additional charge and the driveway is holding up nicely today (four months later) with no additional settling. We also held up our end of the bargain and within a week of A1's first fill, we built and back filled the retaining wall ($200-300) to do what we could to also assure there was no additional settling. The improvement in the driveway is significant, but I rest a lot better now also knowing that our garage floor is better supported and we're not putting nearly as much stress on the re-bar and foundation walls.

Bid was prompt and fair. A1 was the only company contacted at the recommendation of company that had performed Piering services. was very happy with the bid and the execution of the services. Job was completed quickly and crew cleaned all services after completion. used entire truck load of product and was all covered under initial cost. Crew was very friendly and worked efficiently.

They did a great job. The materials and labor used were twice what was anticipated and bid, but they stood by their bid price. They did exactly what they claimed they would. From beginning until the final cleanup, they were very professional and dedicated to doing their best job.