Roofing
Siding
Gutters
Interior Painting
Roof Ice/Snow Removal
Homebuilders
Water and Smoke Damage
Gutter Cleaning
Licensing
Bonded
Insured
All statements concerning insurance, licenses, and bonds are informational only, and are self-reported. Since insurance, licenses and bonds can expire and can be cancelled, homeowners should always check such information for themselves. To find more licensing information for your state, visit our Find Licensing Requirements page.
Business Details 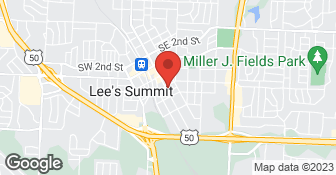 We are a natural disaster restoration company. Roofing, Siding and Gutters of residential and commercial properties that have suffered damage from a natural disaster such as wind or hail storm. We are licensed and insured for your protection and are experienced in working with insurance companies to get your claim processed with minimal stress on you. ...

I felt they did a good job, were very responsive to me, professional, attended two insurance inspections, crew cleaned up very nicely, and they worked with me on payments.  Overall I thought they were very good, just a little overpriced from other companies in the area.

DESCRIPTION OF WORK
Shingled my house and in some places replaced the boards that were rotted.

Anthony took care of all the paperwork with my insurance company.  He kept in contact with me all along. The crew of several men worked very well together. There were enough men that it took just one long (12hr) day to get done. Because of the holiday it was several days before I got the gutters done.  Again there were several men and they ere done in 3 hours. They were very courtious and quiet. T...

Overall I was happy with the job. It has been years since they did the roof and it is in great shape. The repaired the gutter for me and fixed it to be new. They also messed up some of the gutter guards I have, but they later sent a guy out to fix them as well for me. They were very professional and very fast and the job they did was good. I was very happy with the job they did.

DESCRIPTION OF WORK
One of their employees, his name was Sunni, I think that was how it was spelled, came to my door asking if I wanted a free roof inspection. He inspected it and told me I had lots of hail damage. He said that they would help me file a claim with my insurance for it. I told him that I had a few years ago had hail damage when I used to be with another insurance provider and that they refused to pay for it. He said that I did have hail damage and that it would cause leaking so I said I would file a claim with my new insurance company. I had dropped the old one that I had for 7 years with no claims ever when they refused to pay, they are a big insurance company, but I do not want to say anything bad about them. I just will never go back to them. So my new insurance company sent a guy out and they agreed that I had lots of hail damage and that it needed to be replaced. Sonni then worked with me to pick out new shingles and to go over the options. They said that they would bill the insurance company and work the costs out with them, which they did. They started the work on a very windy day, the workers said it would take 2 days instead of one, because the wind was slowing them. They worked very fast and had a huge crew, maybe 18-20 workers. I had a very large roof with 3 layers of shingles (the bottom being wood) so they had to do a lot. They did the entire job in the 2 days and they did it very well. It looked really good. It has now been a few years since they did the roof and it looks great. There have been no leaks and no shingles coming off or popping up or anything bad. Looking back if they had not come to my home I would never have filed a insurance claim. After the horrible experience with my first insurance company I figured apart from my home burning down that the insurance was never going to do anything to help me. I now have a insurance company that I will never drop, they are really good and I trust them to do the right thing and pay when there is damage to my home. I also was happy with this company and the job they did. I told them that I would pay them after all the work was done and I had inspected it and that were alright with that.  They also took care of the gutter that they damaged as well. They hit it with a ladder I think it was and put a huge dent in it, but they sent a guy out to replace it later for me. They also broke a large pot in the back yard, but it was old and the wind was very high that day so I was not upset about it. They also dropped a large board on one of my bushes and broke it, but it has grown back. I do wish that they would have build the boxes around my bushes like Sonni said they would to protect them, so they did not get broke, but with the wind so high that day I think that they just forgot to do that. I was concerned that someone might get hurt with the wind so bad, but they were very careful and they worked hard to get the job done as soon as they could. It is not many who would work so hard in such high wind to finish the job.

They broke both of my skylights. They detached them from the roof and nailed back into the roof. I now have leaks coming through my skylights. He offered a resolution through the BBB that he would put metal sheeting inside the skylights, therefore no sun would come through which I declined. I paid them $5,000 towards the $8900 total, as they would not start work if I did not. They sent unlicensed,...

DESCRIPTION OF WORK
They put on a complete new roof.