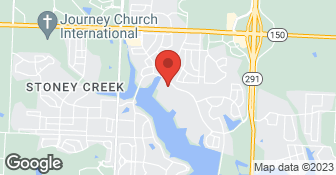 Local family owned business serving the Kansas City area since 1906. Owner and operator has 40 yrs experience in the roofing industry. Guarantees quality work, loyalty to customers and we are fairly priced. We look forward to earning your business....

We offer prompt, professional GUTTER CLEANING & PROTECTION services ( No Windows ) to our customers in the Kansas City Metro Area. Our simple 4-Step process has gained us many positive ratings and reviews on other platforms. #1 We clean out your gutters by hand ( we don't use blowers ). #2 We rinse your gutters with water. #3 We rinse through your downspouts. #4 We thoroughly clean up after ourselves. Reach out to us today for a free quote. We are looking forward to serving you.

I had a leaking skylight. The owner examined the problem thoroughly and detected several issues, including two big ones I had not considered. But the big surprise was the quick and very reasonable fix. I have waited six months (with heavy rains!) to make sure it's holding...and it has! Excellent job.

DESCRIPTION OF WORK
I had a leaking skylight. They fixed it quickly and completely for much less than I expected.

I'd used Acme in the past for a persistent leak caused by a poorly done addition to the house. I liked the work they did on my small problem, and promised that I'd use Acme when the time came to add a new roof. It was a while ago, and the roof has held up. Thanks!

DESCRIPTION OF WORK
Put on a new roof and added box vents.

DESCRIPTION OF WORK
Tear off old roof replace with new.

Within a few hours, someone went to give an estimate on the work. But they went to the wrong address, which they realized when they looked in the gutters of that house and didn't see a gutter guard. I talked to them a few hours later and gave them the correct address. I expected them to return to the house within a few days to give an estimate. But I  never heard from the company again, so I chose...

DESCRIPTION OF WORK
I called Acme because of their high rating on Angie's List and because I wanted a job done at a house close to their business location. I needed a gutter repair, but to do the repair they would have to remove a gutter guard, which was attached to the roof of the house. I received a call back just a few minutes after my initial call, and I explained the work needed.