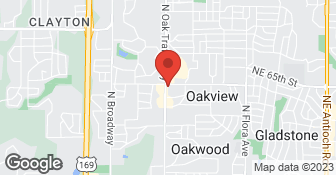 Hi! Please Call use at (816)301-4448 MyGreenKC Insulation is the home improvement that pays for itself, our objective is to save our customers money while making the world a little greener. We are an Evergy Preferred Insulation Contractor. Qualified customers are eligible insulation and air sealing rebates and tax credits. BPI certified professionals. We are local professional small business here to assist with all you home insulation needs. Please Call use at (816)301-4448 ...

It was great they are professionals and communicative and respectful.

Description of Work
They did home energy audit

GIC added insulation and air sealing in our attic. I had multiple bids and felt that GIC was the company that best understood what needed to be done to make our home more comfortable and energy efficient. The team was thorough and did the work quickly and efficiently. I was impressed with their attention to detail and I look forward to a much more comfortable home this summer.

It went well, they were professional & knowledgeable.

The GIC team was very prompt and knowledgeable. They were very neat and cleaned up well after themselves. We had our attic insulated and foam sprayed on rim joist and basement crawlspace. We noticed the house to be much quieter immediately. So glad we had this done in January before the -22 degree temperatures hit. Can't wait to see the effect on summer air conditioning bills.

Everything went fine. They were very cooperative.

Outstanding communication and service. Thoroughly explained work to be performed and documented everything done with pictures and explanations. Highly recommended.

Sean and his team did a great job! From the estimation process all the way through completing the project. We have a really big attic and now we have peace of mind of a job well done. We are already feeling the difference by having a well insulated attic.

This company is professional, responsive and does excellent work! The team is extremely knowledgable. I would highly recommend them for your insulation needs.

[Member Name Removed] thank you so much for the kind words and the review. Luke Smith
5.0

Extremely well! They are totally knowledgeable and professional! Started and completed the entire project which took 8 hours (3400 sq ft 26 year old home) the very next day after they came out to give us an estimate. They gave us the estimate the same day they inspected our attic. Also, were able to repair torn up ductwork caused by raccoons. They were able to cut our air infiltration by 31%. We noticed a difference immediately! We highly recommend them and would definitely use them again. Don’t bother to get any other estimates if you need insulation. They are the best!!

[Member Name Removed] thank you for the work and the review. Luke MyGreenKc
5.0

Swimmingly, 11/10 would hire again. Start to finish the gentleman Sean helped explain and show where are my problem areas were, and the word done made a huge difference.

[Member Name Removed] thank you for the business and the review. Luke Smith
5.0

They came highly recommended, but they exceeded expectations!

[Member Name Removed] thank you for the work and the review. Luke Smith
5.0

They were very professional and this old had no insulation! They notified me of HVAC issues the home inspector missed that could pose health issues and later big expenses. I’d hire them again!

[Member Name Removed] thank you for doing business with us and the review. Luke MyGreenKc
5.0

GIC was fantastic to work with, very informative about the improvements they thought we should make and the energy savings we should expect to see as a result. We followed their recommendations late last summer and have seen significant savings to our heating and cooling expenses in addition to the various levels of our home staying more uniform in temperature. I couldn't be happier with GIC. I feel they did quality work at a very reasonable price. Well worth it!

Description of Work
Energy audit and insulation install based upon that

[Member Name Removed] thank you for the work and sharing your story with our company. Luke Smith
5.0

Workers were prompt and very courteous.

[Member Name Removed] thanks for the work and the review. Luke MyGreenKc
5.0

Excellent! The Green Improvement team arrived quickly and provided a free comprehensive bid. They returned to do the work exactly when they said they would. They began with the energy audit and noted a number of areas that should be addressed. Even though they found some additional work when they got into the attic project, they completed it anyway, demonstrating their quality focus, and did not adjust the project bid/estimate. The entire team (3) was courteous, knowledgeable, professional and trustworthy. With four access points to the attic areas, they worked very diligently to complete the project within one day and cleaned up behind themselves when finished. They retested after completion and found a 30% reduction in heat loss. I am having them out at a later date to spray insulation foam into some bump-out areas and along the foundation, so yes, I would definitely hire them again.

Description of Work
Energy Audit and attic insulation. (foam insulation board along the perimeter walls and then blown in fiberglass to R49 )

[Member Name Removed] thank you for sharing your experience with our company. Luke MyGreenKc
5.0

I needed insulation in my crawl space, basement, as well as in my attic and they were able to do it all during the time frame that was quoted. There were no surprise costs, and they even vacuumed when they were finished. The workers were friendly and not afraid to get in a crowded crawlspace. Thanks again! I highly recommend!

Description of Work
I needed insulation in my attic, crawl space and basement.

[Member Name Removed] thank you so much for the work and review. Luke Smith
5.0

HIGHLY RECOMMENDED! Green Improvement Consulting did an in-depth energy analysis of our 100-year-old home and handled all of the follow up work to improve our insulation, seal air leaks, caulk, etc. - the are FANTASTIC. The work was reasonably priced, they took care of the paperwork for rebates from KCP&L and Spire and were a pleasure to work with throughout the process.

Thank you so much for the kind words and review. Luke [Member Name Removed]
5.0

I found Green Improvement Consulting to be: 1) On time 2) Completed job as described 3) Finished job when they said it would be done I asked for 3 bids for this job and found Green Improvement Consulting to be less expensive yet provide the biggest bang for the dollar. Respectful, and courteous and they even cleaned up afterwards! I would highly recommend this company.

Description of Work
Had additional insulation blown into the attic

[Member Name Removed] thank you for the work and the review. Luke MyGreenKc
5.0

Excellent company - job was done in a professional timely manner. There was a immediate difference in temperature too! If you’re looking to have insulation installed I highly recommend Green Improvement.

Outstanding, WOW! Every once in a while you're just fortunate. I knew I needed insulation. I could see the typical sub par builders grade work. Sean inspected, wrote the estimate at my house and, Emailed the estimate. There is a good bit of science to adding inslulation. They did a blower door test before and after to make sure the house was more efficient and healthy with the correct amount of 'air exchanges per hour.' On time, ready to work, completed the work, and cleaned up. Very little mess. Can't say enough good things about the company. Plan to call them back to spray foam my rim joists.

[Member Name Removed] thank you for the kind words and sharing your story. Luke MyGreenKc
5.0

I called and spoke to Luke about his company, and what he could possibly do to my house to make it more energy efficient. He sent out 2 very nice guys, who did a survey of the house and came up with some things they could do to greatly improve the efficiency of the house. He hooked up some kind of vacuum seal on the front door, and showed me how much air was leaking around the house. He looked at the attic to check the insulation, and it was deficient as well. Sean sent me a very detailed report, with pictures, and gave me his suggestions along with the prices. He also told me that he would file all of the rebates for me (which helped take care of a chunk of what it cost). I haven't received a utility bill yet, but can already tell the difference in the house when I turn the furnace on. I think the house is pretty tight! I had them foam the rim joists in the basement, did the whole home air seal and added much needed insulation. A KCP&L inspector came by when they were almost done, and checked their work. He said that he's very familiar with the company and they always do a great job. I was very impressed, and would encourage anyone that is wanting to save money on utilities and have a more energy efficient home to contact them. They were A+

Description of Work
More insulation in the attic, air sealed the whole house and foamed the rim joists in the basement.

[Member Name Removed] thank you for the work and the review. Luke Smith
5.0

The company was Great knowing what to do and how to do it. I would recommend them to anyone.