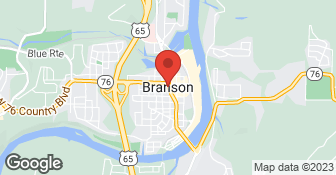 We are a family owned business, my son and myself both work on our crew. We have 5-6 men on the Job, most jobs are completed in no more than 2 days. Once we start your house we don't leave to go to another job until your house is finished. We have been in business for over 20 yrs. We purchase all of our supplies from Arrowhead Building Supply Inc. in Springfield, MO. 417-879-7000...

The workers were congenial and hard working. Apparently the shingles were put on competently. However, my roof cap was not completely finished and efforts to report this were ignored. The flashing around my chimney was not finished adequately. There were numerous roofing nails left in my yard and driveway. Sorry to have to report on the job this way, but facts are facts.

Never heard from them

I apologize for this..... there was miscommunication with Angie’s list and we weren’t getting the messages.
5.0

Went well and were prompt and appears to have been good work.

Exactly how I expected it to go.

From start to finish I could not be more pleased!! After having several intimidating quotes from other companies, Dustin answered all my questions and even suggested several color selections. He showed me where the severe hail damage had been done and clearly stated what they would do and the time frame they would do it within. The job was done in less time and truly succeeded our expectations!!! I would highly recommend them!!!!

Great! Quickly responded to my request for estimate, provided quick estimate, and finished the job in one day! Left my premises looking as good if not better than when they arrived. Honest and fair!

Reggie was GREAT! Very professional and took time to help us decide the best look for our budget and our home. The workers were all courteous and efficient. They cleaned up the yard of all construction debris and we are enjoying our new home improvements!

Description of Work
We needed roofing, guttering, and siding.

They are great. First you can trust the Michams. They know the business and they care about their customers. They did exactly what they promised and even more. Their crew was good to clean up afterward as well. I certainly recommend them for any job.

Since it was the middle of winter, Reggie had to wait for a nice day to do the work. When the weather permitted, his crew showed up about noon to remove the old roof and had the new one on within 24 hours. Since my porch has a low pitch roof, he included a water membrane on the entire surface to stop the constant leaking I had had over the years (this caused the price to be a bit higher than a normal job this size). They did a fine job and the clean-up was perfect. I plan to use him to do the rest of the roof when needed.

All went well. Crew arrived and completed job in timely fashion. They were very professional and responsive to my questions. Did a good job and cleaned up as well.

We had a large water mark show up on the dining room ceiling following a storm. I called around, and they were able to schedule me in by the end of the week. The bigger roofing companies were scheduling two weeks out, so I went with these guys, a small family owned company. Unfortunately, they didn't show up or call to reschedule. I called back on Monday and set up another appointment. They apologized and explained that they're very busy due to the storm damage and short-handed due to an owner's medical condition. They scheduled me in a few days later. The service guy was very friendly and got the work done quickly. It was only $40 to repair some loose shingles, which I thought was really reasonable. We haven't noticed any additional leaking, so far, so good!

Micham Roofing was able to work us into their schedule within 2 weeks of our roof estimate. All the other companies needed 2-3 months and were significantly higher in their bids. I do recommend just calling them on the phone as that is the fastest way to reach them. I typically prefer to use email, but they are usually in the field and don't have someone sitting at the office. The crew was punctual, pleasant, seemed experienced, and they all seemed to work well with each other. They were at our home for 3.5 days which was a bit longer than expected, but we had to wait each morning for the frost to dissipate. The crew cleaned up everything after they were finished with the job.

Description of Work
Mr. Micham called and I explained the roof leak issue we were having. He made an effort to come as quickly as possible to beat the next rain forecast. He arrived on time, was courteous to my daughter since I was at work, and surveyed the roof. He cleaned some valleys and repaired a vent and made suggestions about further maintenance. He called later to see if there was any ongoing leak problem - but there wasn't! And no bill or charge either! Highly recommend.

Reggie was prompt retuning calls as well as on time for the repair. Friendly and professional. Highly recommend!

Thank you (Removed member name) it was a pleasure to work for you. God Bless you and your family!
5.0

Description of Work
Replaced some shingles where I had damaged them with wasp spray (melted some shingles). Really appreciate them coming out for such a small job.

A crew of 6 men arrived at 8:30 in the morning and began work. They were very orderly and professional and were careful to protect the premises. The forman was friendly and easy to talk to. He answered every question I had regarding the job. Everyone on the crew new his job and required very little instruction. Because I had experienced a lot of roof failures over a period of 6 years due to poor installation by the original roofing contractor I watched this crew to be sure they were installing the new roof according to the manufacturers instructions. I am completely satisfied that the new roof is infinitely better now. The quality of the installation was excellent. They completely cleaned up the area when they had finished. I based my review of this company based on my 30 year construction background as a project engineer and project manager overseeing many subcontractors.

Description of Work
Roof tear off and replace on a portion of my home.

A-1 Guarantee Roofing has been in business since 1992 in the same location, with the same ownership and phone number. We have been accredited by the BBB since 1998, and have earned their highest A+ rating. In addition to our industry-leading 5-year contractor warranty, we are factory certified to offer extended manufacturer warranties by GAF under their Master Elite program. We have 20 regular employees. Please visit our website or give us a call for more information. Award winning.  …

We offer free estimates, tearoffs and reroofs also new construction. If you need a new roof, a leak fixed, or someone to pray with you about something you may be facing, give us a call we are here for you. MAY GOD BLESS YOU !

How is The Micham Roofing Company, LLC overall rated?

The Micham Roofing Company, LLC is currently rated 4.9 overall out of 5.

What days are The Micham Roofing Company, LLC open?

What payment options does The Micham Roofing Company, LLC provide

No, The Micham Roofing Company, LLC does not offer free project estimates.

No, The Micham Roofing Company, LLC does not offer eco-friendly accreditations.

Are warranties offered by The Micham Roofing Company, LLC?

What services does The Micham Roofing Company, LLC offer?

The Micham Roofing Company, LLC offers the following services: We offer free estimates, tearoffs and reroofs also new construction. If you need a new roof, a leak fixed, or someone to pray with you about something you may be facing, give us a call we are here for you. MAY GOD BLESS YOU !