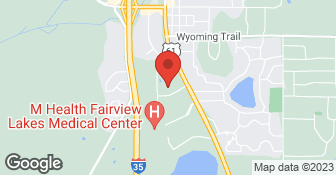 Professional Exteriors Inc is a full service company with services ranging from siding and roofing to decks as well as snow and ice dam removal in the winter. With a wide range of capabilities PEI is able to meet all your renovations needs....

After water was running into the house due to ice dams they were able to come out the next day and get the water to stop comming inside. Thats the good. The bad is we were gouged to the tune of one thousand dollars for two hours worth of work. They did very little to clear the eves off, they still had a heavy sheet of ice. Its a week later and dams are back. They tried charging even more saying they worked longer than they did. Id say we payed 5x the value for 2/3 job.

Hi [Member Name Removed], Thank you for taking time to leave feedback. We have made numerous attempts to contact you directly but we take your concerns very seriously. We are always upfront about the cost of any service before we provide it. Are prices for ice dam removal are set by our roofers. Ice dams will continue to build up so long as the conditions for their creation exists. In this case, your house has an issue with warm air loss. When we combined that with heavy snow and fluctuating temperatures that creates ice dams. Ice dams will continue to perform until the warm air loss issue is corrected. I apologize if that was not made clear. In the case of most ice dams, complete removal of all ice from the shingle risks damage to the shingle, which is why our roofers always leave a layer of ice to protect the asphalt. Thank you and please feel free to contact us as we are always here to resolve any issues with our customers.
5.0

The quality of the work is excellent and the process was easy. I had a problem with the shingles eight years after the installation, I contacted PEI and the problem was corrected at no cost to me.

I never received a call.

Hi [Member Name Removed], We are sincerely sorry for not contacting you regarding your request for a quote. Recently we've discovered that emails from Angie's List were marked as 'spam' and therefore were not visible to us in our email inbox. We would love the chance to come out and give you an estimate if you are still interested. Please give us a call at (763) 434-1500 or visit our website: www.myproexteriors.com. Again, we apologize for any inconvenience. We hope to hear from you soon! Thank you, Professional Exteriors Inc.
5.0

We've previously had siding by PEI & just had our roof done. They are easy to work with & do a great job! They take care of working with the insurance companies to get you the best possible outcome. Thanks Brad & team PEI!

Description of Work
We needed a new roof.

Their workmanship was outstanding and they also worked very efficiently. From the time the claim was settled, they were on our roof within 2 days. Their customer service was impeccable!

Description of Work
Roofing Job that was an insurance claim. They fought for us with our insurance company to ensure that we got everything fixed that needed to and did an excellent job.

Extremely easy to work with. Took care of it all in a timely, professional manner. Answered all of our questions. Any issues were addressed immediately and completely resolved to our satisfaction. Highly recommend Brad and his team.

This project started in July 2015 and it's still not completed. My "new" roof leaks more than the old. In December 2015, I noticed my first leak with the new roof. They blamed it on tuck pointing. The second leak was noticed in May 2016. The latest leak was noticed on 7/23/2016. So, on August 2 I hired and independent roofing inspector. He found that the chimney wasn't properly sealed , hence the leak in December. The June leak was because they "forgot" to replace flashing and install parts of the guttering. They did come out and install new flashing but only on the leaking window. Keep in mind that the other windows still don't have flashing. I guess they are waiting for those to leak before they install the flashing. The needed guttering was also not installed. The most recent leak has not been addressed. The owner is aware of this problem. I have sent pictures, texts and emails along with the inspectors report but with NO response. The siding was installed with mismatched colors. I called and let them know that the siding didn't match. I was told it would be fixed asap. The siding was finally replaced 2 +months later but with more mismatched colors. They finally got the siding to match a few weeks later. I also had to clean up after the workers. I have a covered porch which was sided with brick like shingle material. When they installed the new siding over the old , all the small granules were left on my porch . The porch is carpeted so I was unable to just sweep it up. It needed to be vacuumed up with a shop vac. Because the large granules, it broke my Dyson vacuum immediately. I also had to rent a steam cleaner because one of the workers dropped his big gulp of soda on the carpet and left it there, cup and all. I came home from work to find a floor covered in ants. I also don't believe that they went over the yard with a metal roller. I have found at least 100 nails in my yard. I am surprised that one of my dogs hasn't stepped on one. During the entire project, I was NEVER notified of when the workers were showing up. Typically, this may not have been a big deal but it's rather alarming to find 3 workers looking in your window when you're walking around in a towel because you just got out of the shower. They also left my back gate open not once but TWICE. Each time I would come home and my dogs would be gone. The last time happened on the hottest day of the year. I was LIVID!!! One of my dogs had been missing for 24 hours. I was afraid that he might have died of dehydration or heat exhaustion. Luckily, a neighbor found him under a bush. I had so many problem that I was told that we would have a meeting between myself, the sales person, the project manager, PEI owner and the roofing foremen to discuss all the problems and get them taken care of. This never happened !!! Do not use this company

Description of Work
I had roofing, siding and guttering replaced.

Very professional, pleasant to talk to and deal with. He came out and gave us an estimate and we signed on that day. He told us when he planned on doing the install and he showed up on time that day. The yard was cleaned up and they did a fantastic job start to finish.

Description of Work
we had extensive hail damage. PEI worked with our insurance company and we got a new roof and new siding on our house and garage. They did a great job and were very neat. We have a swimming pool and I was concerned about debris getting in the pool. They were very careful and there was no issue with the pool. We would recommend PEI to anyone needing work done on their home.

If you are looking for a professional to install your roof, look no further. Chismar Construction, LLC, is the name to call. We will provide you with a reasonable estimate and do an amazing job on your roof. Our emphasis is all quality and customer satisfaction! Call us today!  …

Bonded
Insured
All statements concerning insurance, licenses, and bonds are informational only, and are self-reported. Since insurance, licenses and bonds can expire and can be cancelled, homeowners should always check such information for themselves.To find more licensing information for your state, visit our Find Licensing Requirements page.
General Information
Free Estimates
Yes
Eco-Friendly Accreditations
Yes
Payment Options
Check
Senior Discount
No
Emergency Service
Yes
Warranties
No

Professional Exteriors, Inc is currently rated 4.3 overall out of 5.

No, Professional Exteriors, Inc does not offer a senior discount.

No, Professional Exteriors, Inc does not offer warranties.