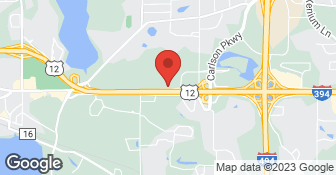 Operating out of Minnetonka, Minnesota, Tom Prezioso and Charlie Gilbertson are the passionate professionals behind Bravo Protection Products. With over 18 years of combined experience, they are clearly the Twin Cities’ Premier “Clear Bra and Window Tint Specialists.” Offering installation of clear bras and Lumar window tint, they can protect your automobile, home and office. Tom was the owner and founder of Bravo Auto Bra when he partnered with Charlie, an experienced window tinter. Together they formed Bravo Protection Products. These two industry leaders possess the expertise, the attitudes, and the experience to make Bravo a clear bra and window tinting two-man powerhouse....

Excellent service! Would highly recommend to anyone looking to get some tint on a vehicle or elsewhere. Quick to get a quote, worked me into the schedule same week, and the tint looks beautiful.

Paul and Kim B.

This is our third time working with Bravo - service, pricing and quality are all consisting great!

Description of Work
Window tint for the new car

couldnt have been better!

Description of Work
Bravo did a full Clear Bra of my truck over a year ago. They were professional, timely, and fair priced. The work was amazing. More importantly, however, was when I had a scratch (my fault) on the bumper and came back to have them take a look today, they not only fixed it right there, but did not even charge me! Always judge a commpany after the sale. If they still jump through hoops to serve you, you have a winner. Thanks Tom!

Job was estimated at 2 hours which was exactly right. They were professional in all aspects and freely answered all my questions. I would recommend them for anyone considering this type of service.

Description of Work
They applied protective paint film to my new vehicle.

Bravo was punctual, polite, and responsive to my questions when I first called. They also set up an appointment within a couple of days of my call (would have had me in next-day if I didn't have a conflict). The work they did appears to be very high quality (though I can't wash the windows for a couple more weeks to say for sure). The price was pretty expensive at $650 but that was driven by the fact that I wanted 3M Crystalline tint (better heat rejection than the standard dyed tint) and also had them add clear windshield film (again, to block UV for heat rejection). Standard tint, only on the door windows and rear window would have only been in the ~$200 range. It would have been much more convenient if I could have dropped off the car earlier in the morning and picked it up later in the evening. To hit the 8:30 am to 5:30 pm (M-F) hours of operation, I had to take several hours off work (got in late and left early). I also asked for a call when the work was done so I might try to pick the car up over my lunch hour but never got a call; when I called them a few hours later they told me it had been done for a while. Oh, well. All in all, I would use Bravo again and would recommend them to others. They did high quality work on a higher-end vehicle that I was concerned to take to less reputable shops. My complaints are fairly minimal and will not affect my long term enjoyment of the work they did.

Description of Work
Installed tint on all windows in my car.

These guys did a fantastic job! Auto tinting is a SCIENCE and ART! Don't even try on your own unless you like wasting your time and $!! Why would you when these guys will do it in no time and for a reasonable price?! I had an appointment at 2. Got my car right in and they were done when they said they would be. Tom and Charlie were fun to talk to, professional and did a fantastic job. I'd recommend them to all.

This process was so easy! I made an appointment and the vehicle was ready to go in no time! Great attention to detail. Very satisfied with the service performed.

Description of Work
Applied window tint to my vehicle.

I was heartbroken to scratch my new car just a few months after driving off the lot, but, fortunately, we'd gotten the 3M protective film upon purchase. I visited the shop without an appointment, and the tech immediately offered an on-the-spot price estimate. I made an appointment, and the work was complete even before the hour-and-a-half time estimate. The car looks great and we were so glad to have this option.

Some small specs got caught in film, but not terribly noticeable if you aren't looking for it. Over all I am very pleased with my window tinting and would use bravo again.

Description of Work
Full window tint at 50% shade. They also do 35%, but that is illegal shading.

They were fantastic, quick, fairly priced. I would definitely recommend them.

Description of Work
They tinted the windows in my car.

I sent Bravo and email requesting a quote and received a reply promptly with the quote. I called and made an appt. for the next day. I was shown the options, Legal and and quot;not Legaland quot;, for window tinting levels and chose the legal option. I was told it would take 30 mins. to install. 30 mins. later I walked out the door with care instructions and a job well done.

Description of Work
I wanted tinting on my two front windows of my Honda SUV.

I made an appointment and brought the new car in to have a custom clear bra paint protective film installed. I was told it would take about 45 minutes, so I waited in the lobby. Bravo Protection Products finished on time and within the quoted budget, but failed to wrap the leading edge of the hood - which is the most vulnerable spot for rock chips and rust spots to begin. The protective film was installed cleanly without any bubbles or scratches, but it stops short about 1/16 inch from the edge. When asked why they didn't wrap the leading edge they stated that it was an option available only upon customer request. They don't offer this and quot;secretand quot; option upfront because it is too hard or time consuming to explain. I have never seen a protective film that wasn't wrapped, so how would I know that Bravo's and quot;standardand quot; was even an option to worry about? As a gesture (good will or street?), they did offer to remove the original film without charge as a remedy for our dissatisfaction.

The member contacted us for a clear bra installation on his wives Lexus. He asked if we installed the 3M clear bra. We told the client that we did offer a clear bra and asked him what areas he would like to cover. We offer 12" 18" 24" 30" and full hoods. We also offer full front bumpers, headlights, rocker panels, rear bumpers, roof, a pillars, and other areas of protection. The client stated all they wanted was the hood fenders and mirrors package. I asked him when he would like to schedule the appointment and he stated its not his car its his wives and she will call to schedule it. The member's wife called and scheduled the clear bra installation. When she arrived we asked her what she would like for coverage and she said whatever you put on the front the hood fenders mirrors package that is $200. NEVER ASKED about wraped edges or what size coverage. After the install we showed the customer the coverage and she left. A month later he shows up at our shop and says why didn't you guys wrap the edge. I told him that the lit we put on the car is the standard package that is used in the industry. He said he has had four other cars done and they were all wrapped edges. I asked him if this is what you are used to ordering for clear bra kits why wouldn't you ask me for that. We offer wrapped kits for no additional charge at all. He said I guess its just a learning curve. I told him that I was sorry that he ordered the wrong thing and offered to remove it for free. He decided to decline and left. We have been providing clear bra installations for over 10 years and work on some of the finest automobiles in the world. We service over 40 local dealerships and would love to show anyone in the minneapolis, MN area that we can provide the best wrapped clear bra on the market. Thanks Tom Prezioso Owner Operator (952) 476-7025
5.0

My daughter purchased a used vehicle that ended up having illegal window tint on all the windows. Needless to say , she got a ticket. Both my daughter and myself checked with several businesses to get the window tint replaced. She decided to use Bravo Protection Products. From the moment we walked through the door, they were very friendly and explained all about window tinting. They removed the illegal tint and replaced it with what is legal in MN. When we picked up the car, they explained all about the care add upkeep of the new tint. All around everyone was very professional and friendly and the did excellent work. They only needed the car for about 4 hours and it was completed. If I ever have a need for this product again or perhaps any of the other things they offer, I will not hesitate to use them again. Both myself and my daughter are very happy with their work.

Description of Work
Removed illegal window tint on a car and replaced with the correct/legal tint for the state of MN.

At Affordable Auto, we pride ourselves on repairing and maintaining your vehicle right the first time. With over 25 years of experience servicing vehicles, we work on every car like it is our own! No matter what vehicle repair you need, our auto technicians are ready to get you back on the road. We handle all auto repairs to your foreign, domestic, or hybrid vehicle no matter how major or minor. Award winning. Locally owned & operated.  …

For over 25 years we have been servicing vehicles in the White Bear Lake area and surrounding communities. Started by Greg Martz, we're still a family owned business focusing on you as our customer. As an AC Delco tech center, you can be 100% confident that only the highest quality auto parts will be used on your automobile. While many of our competitors cut prices by cutting quality, we guarantee that all of the replacement parts that we use meet the O.E.M. specifications (original equipment specifications). We do it all, from minor repairs to complete overhauls! We distinguish ourselves from any competition by our exceptional auto repair and customer service!  …

Bravo Protection Products is currently rated 4.8 overall out of 5.

No, Bravo Protection Products does not offer eco-friendly accreditations.

Are there any services Bravo Protection Products does not offer?