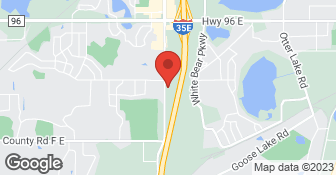 We provide a clean, experienced, moving crew with all moving blankets, dollies, and floor protection - everything to endure a professional and safe move. We will come out to your home or office to estimate your move for free, not just throw numbers at you over the phone. We offer packing and relocation for home and commercial/industrial moves thru out Minnesota. Here at Hedberg Moving Solutions we don't believe in gimmicks. We believe in god old fashioned customer service with a professional moving team that will take the stress out of your move. We are the movers that you can count on to take care of all your unique moving needs. Hedberg Moving Solutions is licensed and insured, DOT #21844271...

We hired Hedberg to move our mom from a townhome to an apartment. The move itself went very smoothly, but more importantly, they were great with our mom, who was kind of nervous about the whole process, and they even went over and above by making sure her mattress was flipped exactly as she wanted. They were great to work with and we would definitely hire them again.

Couldn't be more pleased. Given an initial estimate but when arrived, realized that it was a job for three men and would require removal of inside bannister. Said he would return and would charge us the same as the quote as a matter of principle. Returned as promised with total of three men, carefully prepared inside to avoid damage to walls, stairs and floor. Went about their business carefully and professionally. They worked really hard to get that beast in place and left everything as they found it. Would use these folks anytime for any type of moving.

Description of Work
Move 750# 48" refrigerator freezer from garage to first floor of residence.

Couldn't have been happier! From the initial call, to have Branden come out and do a walk-through to create the estimate, to move-day...all were efficient, punctual and professional. On time, on budget, and with quality. In our current job environment, hiring and keeping good talent is hard to do. Hedberg finds a way to hire great employees. I have used them twice and would hire them again.

This is a fantastic family run moving company. We got a competitive bid from Hedberg out of 4 movers we interviewed. We narrowed it down between two. We liked the idea that Hedberg used the same people to pack, then load the truck the next day, then some of the same members drove the truck to the new out-of-state location. This way we felt familiar with the team. They were all professional, experienced and super friendly (with a good sense of humor). They protected the house and furniture and everything was packed and protected very well. We also had a very complicated arrangement. There was a two-week delay from when we moved out of our house to when we could get in to our rental. And once the delivery was made to the rental, about 40% of what was on the moving truck had to go to long term storage. Packers and movers were on time and very hard working. So, everything was packed and two trucks were brought over. One for the storage items and the other for everything going to the condo. Then those loads were put into two-week storage in separate pods (in the Minnesota location). We had to run a bank errand while the packers were packing and when we got back, we were amazed at how much progress had been made. I realized the next day that I had some money set aside for toll road fees and also forgot about some cash in another location. Wasn't sure I could expect to find that on the other end. Well as we unpacked...There was the money! All of it! They just packed it like they packed everything. Some of it may not have been real visible but some of it was, even so, this is how trustworthy these people are! When it came time for delivery, Mike and two crew members made the 7 hour drive. They called us right away when they encountered a long delay. So even though they weren't on time, they notified us right away and that's what matters most to me. It was during the hot spell in Chicago and I honestly don't know how these guys did that long drive and lifted all the heavy items in that sweltering heat without complaint. And they are so polite. It was just a total pleasure to do business with these people. And the cost came in at below the estimate and that is always a welcome surprise. Again a sign of honesty. We have moved out of state a few times and have had good luck with our moving companies but these guys were outstanding! Highly recommend. Awesome crew! Thanks guys.

Description of Work
Out of state move plus temporary storage

I just completed the most fantastic move I've ever experienced and Hedberg Moving was the reason why it was so great! I am so grateful to them that I needed to share my thoughts. They were totally the best moving professionals I have ever worked with and knew exactly what they were doing right from the beginning. My estimate was incredibly accurate - to the very last box they predicted I would need! They actually came in under time estimated because my two professionals (Brandon and Travis) were amazingly efficient. I had several questions before the move and their customer service manager, Dani, was immensely helpful in making sure my move day was set up to be perfect. The moving team carefully wrapped every single piece of my furniture in blankets and handled all of my brand new furniture with care. I did not have any damage whatsoever - not a single ding or scratch -which was very important because I had new furniture. I couldn't have asked for a team who worked harder or smarter. I realized while watching them that I had previously been moved by people who were strong in body, but were not experienced, intelligent and strategic moving professionals. Hedberg is the real deal when it comes to knowing how to accomplish a perfectly executed move. I confidently let Hedberg Moving handle my move and they delivered me to my new home without any of the stress I've experienced with other moving companies. I felt like I was their only client the whole time they were with me. They were incredibly respectful, clean and just fantastic people. They will be the only moving company I will ever work with from now on. Hedberg Moving has redefined the standard of what professional moving is. I recommend them wholeheartedly to anyone planning a home or office move.

Their crew was professional & courteous. They handled objects carefully, wrapped & packed them 100% better than me. I’ve used them several times for different moves & have always been pleased. I highly recommend them.

We moved within Woodbury, but needed company that would do a pick up at two locations, then unload at our new house. We go three bids. Hedberg was the mid-priced one. We got a quote over the phone, and the actual cost was within $100 of the quote! The team they sent out was AMAZING! My husband was skeptical of hiring a moving company, but these guys changed his mind! I've already recommended them to friends who need moving services.

Everyone was helpful, courteous, professional. Great crew. Did a walk through both homes at the beginning of each move to understand the layout of the homes and to listen to our needs and wants. Fast, careful, unmatched work ethic. Wrapped furniture. My only complaints after the move were: (1) that labelled boxes did not always find there way to the right rooms, and (2) boxes labelled as "Fragile, Do not Put Anything on Top" had heavy boxes placed on them. Fortunately, no damage resulted.

Description of Work
Moved contents of a two story, 3,400 ft2 home including full, finished basement into a new town home.

Corry and Tim did a fabulous job. They called to let me know they were on the way. They checked access points and where I wanted things. They spread out a sheet so that my new carpeting wouldn't get soiled and they were careful with all my goods. They were a pleasure to work with.

Description of Work
I needed three small moving pods unloaded with the contents going to a fifth floor.

The Hedberg team was great! They got everything loaded up and nothing was dropped, scratched or otherwise damaged. Everything went smoothly.

Description of Work
Moving into house.

***We are a multiple year Super Service Award Winner, with an "A" rating at the Minnesota Better Business Bureau, and Google. We're a full service moving company covering the entire state of Minnesota. We do full packing, as well as moving of entire households. Our workers will stretch wrap all of your furniture then put clean, thick moving pads over it for protection. We've been in business 14 years, and are fully licensed and insured. We are a local company that takes pride in running a solid, and ethical moving business.  …

We are a family owned business with 48 years experience in the care of pianos. We are full service, with customer satisfaction our number one goal. We specialize in piano tuning and repair, piano and organ moving, both local and national. We also store pianos in a climate controlled environment, on our site. Our showroom displays previously owned pianos for sale.  …

Hedberg Moving Solutions is currently rated 4.9 overall out of 5.

No, Hedberg Moving Solutions does not offer a senior discount.

No, Hedberg Moving Solutions does not offer warranties.