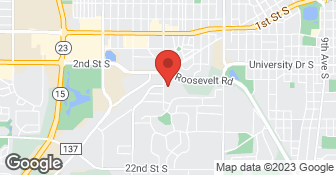 At Darlington Construction, LLC. our goal is to help you design and build your construction project with Integrity. We strive to make the process easy and enjoyable for you. We are a full-service design/build company with a wide range of experience, from Design Build Specialist of Residential - New Homes & Additions, Remodel & Restoration. Roofs, Kitchens & Baths, Decks, Windows & Siding. From a 150,000 sq. ft. commercial strip malls to a 200,000 sq. ft. grain storage building to a 100 sq. ft. room addition for your home to a 200 sq. ft. office remodel, we've done it all. We offer financing for our credit worthy customers and have seasonal discounts....

They only completed one job, and the rest of them were not completed. I paid up front for the jobs and at that point they did not refund or return phone calls. Only when I called the attorney general did they give me a partial refund. I would not recommend this company to anyone. The guy is a fly by night with several judgements/bankruptcies and court cases pending and does not even pay his subcontractors who do the work in a timely fashion. Avoid at all costs.

Description of Work
I few years ago, I contracted Darlington Construction LLC to perform several services on my address. I had a laundry list of external projects that needed to be completed, including roofing, yard work, foundation, and fireplace repair.

Supposed to take 6 weeks total divided in 3 phases, yet took 6 months. Slow or no response to calls and messages. Was more attentive at the beginning yet appeared to lose interest as time wore on. Didn't pay his tile sub-contractor and didn't respond to our calls and messages regarding concerns about this. We ended up paying the sub-contractor direct and deducted the amount from balance owed, Would not recommend Darlington Construction.

Mr. Darlington had wonderful ideas and assisted us in choosing colors that coordinated well with our home and had beautiful designs for future projects. He stated that the work would be done in two weeks. The actual time was much longer but that was not really a big problem for me. The small porch is beautiful and well done. The stamped concrete with color overlay was perfect until the installer applied the sealant and left footprints under the sealant throughout the patio. We called multiple times over several weeks to complain and were told that it was from our Chinese neighbors walking on the porch and not from the construction workers (no neighbors were in the backyard and the prints are clearly from a work boot). After we refused to pay the remaining balance until this was repaired, Mr. Darlington arranged for the concrete specialist to come and assess the concrete. This gentleman admitted that it was his workers' footprints. I asked about replacing the concrete which he refused. He offered to strip the color and reseal it without an acid wash or additional color which would mean we would lose the color overlay or to give us a relatively small discount on the amount owed. We chose the later in hopes that the footprints would fade over time. The footprints are easily apparent as of today.

I chose them as I was panicking because we had a bad storm and I saw a thing in the paper, I called, he came out and that is how I did it. The roof that they put on is absolutely to die for. They did an extraordinarily good job. They did not even leave a nail. However, there are other things about them that put me off a little bit. I found out later that he was having financial problems and there were these things like when he initially looked at my house he was saying that there were things with the siding but then when the adjuster came out the adjuster could not find them and neither could Darlington. He had an odd way of wanting the payment I thought and when I gave him the last installment of the payment it took him a long time to give me back a receipt and I did not like that. He also had this funny thing where he wanted to know do I have insurance to cover his work, so I thought that was weird. However, I will have to say when they came there was nothing wrong with that and the roof is just gorgeous. I would not hesitate to recommend him.

Description of Work
Darlington Construction put in a new roof on my house.

Rain delayed the start of the project which caused it to overlap another. They juggled booth well. They did good work, cleaned up the work site and were very responsive.

Seamless gutter installation and repair. Premium gutter guards/leaf filters. Our products are custom made and installed by trained professionals. No job too big or too small. We have Veteran and Senior discounts.  …

Glass Guys LLC is a glass company providing services in the residential, commercial and auto glass markets with a combined experience of well over 30 years. Whether its a custom heavy glass shower enclosure, custom mirror/glass, window glass replacement, commercial storefront or even a windshield/auto glass need, we've got you covered. Do not hesitate to contact us for help with your current or upcoming project! Please contact us at 612-564-4860 or email us at : sales@glassguysofmn.com  …

Call Us 24/7 at (612) 331-4454 For Immediate Response. No Matter the Size of the Water Damage Cleanup, We Have You Covered. We pride ourselves on our personal commitment to each and every client. When you call us, it’s like you called a family member because we treat every job like it was our own home or business.  …

Darlington Construction LLC is currently rated 3 overall out of 5.

No, Darlington Construction LLC does not offer a senior discount.

Are there any services Darlington Construction LLC does not offer?