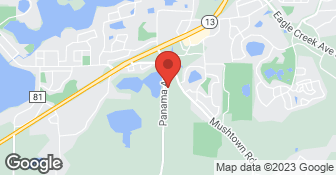 Above Quality offers a wide variety of concrete and masonry services. With combined experience of over 100 years, we work with our clients giving them expert advise and creating the perfect plan that will ultimately enhance their homes value. ...

Did not put barrier in between apron and garage concrete. Left message after message no response. Now our garage floor is crumbling. Talked to the owner said he will do nothing about it. Buyer beware.

This member took us to small claims court on January 9th, 2015. Above Quality Inc won the judgment, as we had an independent contractor check the quality of work and vouched for the nice job that had been done. As we don't understand why this individual felt the way he did, we strive to give all of our customers quality work & a great experience.
5.0

They were excellent. They did the work as quoted and in a timely fashion. The crew was flexible. I went with them because they are local and have a good reputation here and on Angie's list. They had a fair rate.

Description of Work
They did a patio for me.

Glenn was very professional in how he explained what needed to be done and assisted us with deciding the type and color of brick that would look best. His team arrived early and they worked late into the day trying to complete as much as they could. I work from home and they were very respectful of the noise factor...as much as they could be. They cleaned everything including cleaning out the gutters of any debris that was collected due to the work. We are VERY pleased with the work and will definitely use them again should we have any additional work to be done!

Description of Work
Tear down old chimney and built new.

Submitted accurate and detailed estimate. Arrived for installation on time. Was respectful of our property and of us. Did the work professionally and were friendly. Did the prep and install in one day. Came back a few days later and finished the details and final work. The whole crew was respectful, friendly and efficient. Amazing job and people.

Glenn was very responsive and accommodating from the day he came and bid the job, he seemed like a great find. I had a number of concrete guys out to give me a bid, and he provided the best price. On top of the best price, Glenn also allowed me to borrow his pressure washer to clean out my garage and wash the concrete which he was not going to replace at no charge AND, he used his dump truck to pick up and deliver landscape rock to my residence for a fraction of what the nursery wanted to charge..... I thought I had the best deal in town. Well the day after the concrete install it rained, Glenn had a couple guys over to cover the work they had just completed, and he told me that if I ever had any problem (which he said I wouldnt as a result of the rain) to give him a call and he would take care of it. Now, just 2.5 years after the job was completed, the concrete work he did is breaking down. Not only are some places a very white white compared to other areas, but the concrete is chipping up and cracking in a number of places. One square has even worn off the top layer and is showing the rock or whatever was mixed with the concrete (see pics). I have left numerous voice mail messages on the two numbers I have for Glenn, but I have not heard back. Leaving negative feedback here is my last resort.

Description of Work
I hired Glenn to tear out and replace existing front concrete sidewalk, stoop, as well as the wrap around side walk leading to the patio at the side of the house, roughly 280 sq ft of sidewalk.

Nobody should dump salt on fairly new concrete, as it is the only chemical out there that eats the surface of concrete. Also, as a reminder to all, ALL concrete should be continuously resealed with a acrylic based sealer, not water based sealer as you would get from large home improvement stores. All my customers are told this!!
4.0

It went generally well and the only complaint is since winter there are a few cracks and the rest of the garage and pad is flawless. He responded to my call and he is coming to look at it in the spring. They were punctual and they cleaned up well.

Description of Work
They did a rip-out of concrete slab and repoured the driveway and garage floor.

They were messy. The quality was a little below what I thought it would be. It took them longer than I thought it would. They would leave at the end of the day with out telling me. The job looks beautiful though.

Description of Work
They rebuilt our fireplace and chimney.

This was an exterior job - Cutting and grinding mortar, brick, stone and concrete can be exremely dusty. On an exterior job, we typically do not baracade off for dust, on an interior job we do. All timelines for completion are subject to weather and unknown circumstances that may arise. We don't feel an extra day or two validates timeline discrepencies while getting the job done correctly which this was! As the member stated, "The job looks beautiful though".
5.0

Glen and his team gave us the most affordable price of all our estimates and he was willing to take a small job, which many other companies were not. He returned our calls promptly, his team arrived on time to do the work, and did a nice job with sloping the cement addition of the driveway. The only problem we ran into was they day they came to seal the driveway it rained very hard, so we asked them to come back and reseal it, which they did within a day of our request.

Description of Work
They cemented and sealed a 19 x 6.5 addition on our driveway.

We were very pleased with this contractor. Glenn was friendly, answered our many questions thoroughly, came in at a great price, and has very hardworking friendly employees who conducted the work. The timeliness, quality and friendliness of all involved made this company great to work with.

The look of your home can say a lot about you and your home’s value. Our licensed stucco professionals at Superior Stucco Inc. install, modify, or repair any types of stucco systems to refresh your property. We are a full-service stucco contractor providing quality service to residential clients in the MN greater metro area and beyond. Our team of experts is dedicated to working with you to implement a solution that meets your needs. Get an estimate and call 952-381-5854 today.  …

Thank you for checking out our Angie's list page. We look forward to speaking with you. McClellan Exteriors has been family owned since 1993, with over 36 years of experience. McClellan Exteriors strives in quality work men ship and is dedicated to provide our customers satisfaction from start to finish. We take pride in being Minnesota's leader in expertise in the stucco and plaster industry. As a familiar midwest value, we have strong work ethics within the company. Our employees go above and beyond to provide a quality finish for each and every customer. We are privileged to have the opportunity to work with you in the future. Our goal is to continue to be your expert guide in the upcoming trends of stucco and construction. Referrals are our biggest compliment, please pass along our information to someone in need of excellent stucco work! Bill McClellan, Owner and Operator of McClellan exteriors. (612) 875-7793 We can provide a variety of services for both residential and commercial exteriors, including: • Stucco installation • Re-dashing • Patching & repair • Cultured stone • Stucco textures & patterns • Colored stucco Trust in our experience and knowledge to create a beautiful and functional exterior for your home or office. We will work tirelessly to make sure the finished product exceeds your highest expectations. Visit our website for money saving coupons. Give us a call today for your free estimate! Award winning. Additional DBA - McClellan Stucco Company Inc.  …

Bonded
Insured
All statements concerning insurance, licenses, and bonds are informational only, and are self-reported. Since insurance, licenses and bonds can expire and can be cancelled, homeowners should always check such information for themselves.To find more licensing information for your state, visit our Find Licensing Requirements page.
General Information
Free Estimates
Yes
Eco-Friendly Accreditations
No
Payment Options
Check, PayPal
Warranties
Ask for Details

How is Above Quality, Inc overall rated?

Above Quality, Inc is currently rated 3.5 overall out of 5.

What days are Above Quality, Inc open?

Above Quality, Inc is open:

What payment options does Above Quality, Inc provide

No, Above Quality, Inc does not offer eco-friendly accreditations.

Are warranties offered by Above Quality, Inc?

No, Above Quality, Inc does not offer warranties.

What services does Above Quality, Inc offer?