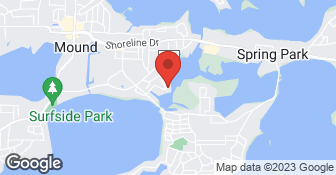 We build decks and porches in the western metro. Fully insured. CONTRACTORS LIC #BC073200...

We changed our cedar deck to a composite Azek product as we tired of the maintenance and expense involved in the upkeep of a 19 year old cedar deck. We had two estimates. Both were similar in price. The difference is Steffan's quote was based on Azek composite decking and the other quote on the less expensive Timbertech product also manufactured by Azek. In addition, Steffan's quote included adding 3 joists to provide additional support. He was very detailed and hands-on during the entire process. We are very pleased with the result!

Two Teacher Construction was excellent from start to finish. Steffan immediately responded to my initial phone call. He was at my site shortly after and provided professional advice on what to do with my deck. His estimate was very fair. It was easy to see that his crew also has strong experience. He is an absolute PERFECTIONIST, yet completed the job much quicker than I could have expected. Two Teacher Construction will be my first call on all future projects.

They seemed really nice and polite, Everything was great I just have not done anything with my deck yet. He was really nice, really polite. Great guy. He was really nice, it was just out of our price range. We got a few bids and they were all out of our price range. I would use them again. Realistically I will probably give them a call back next summer because they were right in the middle of all of the other bids. They weren't higher or lower or anything, they were right in the middle. The guy seemed really nice and really seemed like he knew what he was doing compared to some of the other people we had out.

Description of Work
Estimate to have deck redone

Awesome construction. These guys are perfectionists!

Description of Work
Re decking existing deck with Azek material.

As a licensed architect, I solicited their help on a remodel project and was surprised to hear their review of existing site conditions. The estimator not only used wrong terms when describing the structure, he also was inexperienced in identifying structural loads and engineering. As the property owner, I was simply asking for an estimate and timeline - by the end of the meeting, I was left with neither. After the estimator gave me a hard time the quality of materials and construction of the original deck, he went on to say that he could do it but it would be expensive. He then discredited the original structure but didn't seem familir with my reference of the the 2015 Minnesota State Building Code changes in Chapter 5 regarding decks. I think they would do a great job with a ground up deck where they can take a predetermined, manufactured deck plan and execute it like a recipe. However, as a licensed professional I remain leery on their ability to preform custom or non-standard work.

Description of Work
We asked for their help with a deck project replacing and modifing an existing structure. They job was phase one of a larger landscape plan. I would imagine they specialize in small scale projects. I don't believe they have the leverage or experience to help with custom or large scale projects.

Our motto at Two Teacher Construction is "We Design and Build Quality". The owner was looking to have his deck railings and flooring replaced on his 30+ year old deck. After examining his deck, it was clear to me that the deck had many structural defects. The beams and support post were sagging, bent and under designed. I felt the deck was structurally unsafe and needed additional repairs. The owner was not interested in addressing the structural deficiencies, he just wanted a bid on railings and decking. I explained that I was going to pass on the opportunity to bid on his project as I believed additional repairs were needed. It was unfortunate that I went to his house Sunday morning April 2nd, to accommodate his schedule, only to receive a negative review. As a deck builder for over 20 years, I gave my free expert opinion and passed on the job. Steffan Madsen - Owner - Two Teacher Construction
5.0

Ecellent work - all phases - planning - design and materials, proposal, workmanship, quickness, neatness, and very pleased with results. Cost was competitive with other proposals - worth it! Very pleased and grateful to find this provider! Would definitely work with again and would recommend.

Great - encountered some unanticipated house issues. Recommendations were made and the problem corrected. Very professional and I trusted the quality of the work.

Description of Work
Deck, front steps and side steps

They did a phenomenal job! He changed the direction and color from what was originally there. We needed handicap accessibility, and he was able to make my accommodations without having to get a whole new threshold, which other companies estimated to cost thousands more. I can't speak highly enough of the quality of work. He has a great eye for color and detail. I am delighted with the work and have gotten many compliments. One side of the deck is a little shorter than I wanted, so they are going to come back out and extend that a few more feet. They were following the existing footings, so it wasn't any fault of theirs.

Description of Work
They built a new deck in the front of the house, including stairs. They used existing footings.

This was a highly professional and responsive team. They made sure all work was done correctly and that no detail however small was overlooked. The owner was very "customer service" focused and made sure things were done to the highest standard. He made suggestions re materials that we may not have considered but his recommendations will make the new deck more enjoyable for us and any new owner in the future

Great to work with. Steffan gave us a bid for the deck, No Maintenance decking and aluminum black railing, and custom lockable gate at top of steps. His price came in about the same as other companies Cedar deck bid. They did a great job so we used him to frame out our basement.

Description of Work
They built our deck this summer. Framed in our basement

SUPERIOR DECK AND PERGOLA CONTRACTORS! Pink Construction LLC is a family owned and operated contractor company with over 15 years of professional industry experience in deck and pergola construction. We are licensed and insured and proudly serve the entire West Metro Area in Minnesota. Our passion is assisting in helping people to extend their interior space of relaxation and fun to the outdoor exterior space. We specialize in custom deck construction as well as offer custom footings, railings, and pergola construction.  …

Ask about Angie's list discount. Craftsmen Home Improvements, founded in 1991 is an award-winning contractor specializing in window replacement, siding, decks and roofing. Craftsmen uses the highest quality materials, backed by the longest, most extensive product warranties available. Awarded the Angie's List Super Service Award every year since 2004. (We have a 5 window minimum), (Gutters only in conjunction with roof or siding), (Attic insulation only in conjunction with a new roof.) (We do not do roof or siding repairs) Additional Phone Number: (651) 229-4045, (763) 441-5552 & (612) 861-1958. We offer James Hardie siding, and Vinyl siding, Timbertech and Azek deck material, Owens Corning and GAF shingles, Andersen Windows, Marvin Windows, Hayfield Windows, Richlin Windows, Lindsay Windows, Pella Windows.  …

We are a roofing contractor that specializes in Cedar Shake and Shingle, Asphalt and Fiberglass Shingles, Rubber and flat roofs. We also offer Siding, Gutter and Window installation services. Call us!  …

Insured
All statements concerning insurance, licenses, and bonds are informational only, and are self-reported. Since insurance, licenses and bonds can expire and can be cancelled, homeowners should always check such information for themselves.To find more licensing information for your state, visit our Find Licensing Requirements page.
General Information
Free Estimates
Yes
Eco-Friendly Accreditations
Yes
Payment Options
Check
Senior Discount
NO
Warranties
Yes

TWO TEACHER CONSTRUCTION INC is currently rated 4.9 overall out of 5.

No, TWO TEACHER CONSTRUCTION INC does not offer a senior discount.

Are there any services TWO TEACHER CONSTRUCTION INC does not offer?