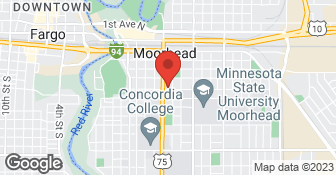 ALL AROUND HOME REPAIR...

ND Lic 40839 MN Lic RR782465. At Asset Services, LLC we take great pride in our experience, expertise, quality and customer service that we provide to meet the consumer’s needs. It is our mission to provide excellent workmanship and complete customer satisfaction from start to completion of a project. In order to understand the needs and expectations of our customers, we take great care to work and communicate with every customer in a professional manner. Our reputation is based on service, safety and quality, regardless of how large or small the job.  …

Noble Roofing & Exteriors is a top-tier roofing company, dedicated to providing our clients with the best available services that fit within their budget. We commit ourselves to excellence and working hard everyday to deliver top-notch products and services to our customers. From the moment you contact us to the moment a job is finished, you can count on us to be consistent, professional, and ready to put your needs first. Our team is highly involved in our local roofing community. As industry professionals we are in tune with the most current and up-to-date standards, materials, and practices. With ever-changing roofing technologies, eco-friendly materials, and application procedures, it’s crucial that we are ahead of the curve and have our finger on the pulse of Southern California. We are committed to providing you with: Quality – All of our materials are of top quality Warranties – We have some of the best warranties in the business Communication – We communicate every aspect of a project so you never have to wonder what we are doing Timeliness We ensure that each job is completed in a timely manner Trust – We are committed to establishing a long-term relationship with you so that we can take care of your roofing and exterior needs now, and in the future We hold many years of construction experience working for you, and we have worked hard to build a solid reputation that you can trust.  …

This handyman practices inhumane ways of removing squirrels from his own personal property. He has been seen taking a cage of live squirrels and drowning them as a means of removal. He should be shut down and charged for animal cruelty and torture.

Good for small jobs (replacing faucet), but apparently not for larger jobs. Contractors obviously were not skilled at what they were doing and caused more long-term damage. Also cheap materials were used despite request to use quality materials. Looked terrible in short time. Very displeased. Will not use again.

Luxury vinyl tile (LVT) installation was a disaster. These guys are handymen who continually aspire to be legit contractors, but when you're mediocre you're mediocre, and that aspiration ain't gonna happen. Noticed the worker laying the tile wasn't preparing it for the grout; he had hastily laid several LVT down when I called Guy, the owner or whatever, and told him about this. I couldn't have emphasized the grout enough, and instead of taking responsibility I got excuse after excuse after excuse; but of course he assured me it would be taken care of. Next day his boy Jimmy, assured me it would be taken care of. "Trust me, I know what I'm doing," he said. He didn't or didn't care.. No grout channels were used, no spacing of any sort was used to separate the tiles the standard quarter to half an inch, which is right in the tile instructions, just like they laid the tile on the existing sheet of vinyl, which once again the manufacturer warned to not do in order to achieve maximum performance (i.e. longevity). The space between tiles doesn't even register on the tape measure, with a pitiful amount of grout penciled in, although the entire bucket of grout went missing. To add insult to injury, no plastic was laid when the refrigerator or toilet were removed; so not only did the place smell like sewage during the nearly 2 weeks it took to do a 2 day job, but when the fridge was moved, a copious amount of rusty, stinky water soaked the already dilapidated carpet, ultimately totaled, and later we found water stains on furniture and other objects not moved out of the way or protected. The real contractor I'm having come in to finish the rest of is now having to clean up their mess. The transition, for instance was literally nailed to the LVT, leaving exposed holes in the tile. What a bonehead move--would this have been done with ceramic? Of course not! The real contractor, someone who's actually a tradesman and not some mediocre "handy man," confirmed how shoddy the work was; the tiles also just tore apart from one another when the transition was removed, and no evidence of grout at all. I warned my father not to use these guys; we share ownership of the house and I'd wanted to use someone else; but his goal was to do it on the cheap, even though the costs were inflated as usual, as they have been for years, taking advantage of my elderly parents with the old up-charge trick and what not. The End.

Description of Work
Bathroom and kitchenette remodel in apartment on garden level of house.

Fantastic, showed up on time, did not leave a mess, and talked to us before leaving.

This was to be a two day project and it took 8 days. I will give them a day and an half because it did rain. They would show up for 30 min. and then gone. I had to make calls to get them back on the job. I guess they were stretched between jobs. Jason does great work. You need to keep an eye on them to make sure it gets done the way it is supposed to be done. They said they were finished and I had to have them back to redo the finish trim inside the house as they tried to cut corners with the material and fill with caulking. They meet with me and finished the window the way it was to be done. I would like to use them again on another project but not sure if I should.

I had home services done by Handy Guy Services. They were here in the last part of November of first part of December. I think I paid him for the complete work, I think I paid him twenty seven hundred dollars. The scheduling was good. I think I waited about a week and a half. They were very personable. I liked them all. They were very knowledgeable and helpful. I was satisfied. I didn't have any problems. They did a good job. It wasn't exactly perfect, it wasn't over the top. I would tell others I recommend them just keep an eye on them like you would anybody else.

Description of Work
They remodeled my bathroom. They tore out the vanity and shower stall. They painted my living room. They did some plaster work.

I made an agreement with Guy (at Handy Guy Services) to clean my gutters. The first gentleman who came out was not able to complete the job but he did let Guy know an Guy came to the house and completed the job to my satisfaction. I will use Handy Guy Services again.

Description of Work
I needed my gutters cleaned.

Working with Handy Guy Services was very easy - they were very responsive and came close to the time they quoted. I was surprised at their efficiency and desire to get the job complete before leaving at night. It took a little longer than expected, but the two people working on it were very nice to work with. There was a little discrepancy on moving items and wanting to charge me more, but after a discussion with Guy, this was resolved. I will definitely use this provider in the future, and we've already discussed future projects.

He was punctual and very pleasant.

THANK YOU [Removed member name]. YOUR THE REASON WE LOVE OUR WORK. LOOK FORWARD TO YOUR OTHER PROJECTS!
5.0

I have done work like this in the past, and have worked with construction companies in multiple states. I have to say that Guy and Jason did an excellent job and did it at a fair price. They were easy to talk to and discussed with me different ways of accomplishing the job. Frankly, I am not sure why they received negative ratings form others. We tried to get quotes from other companies, and only two got back to us. Handy Guy responded in a reasonable time frame with a quote. If people do not want the job, just say so. If you are to busy, just say so. It's ok to say the truth-"I don't have time to do what you want done right now. Maybe we can schedule it later." Fargo/Moorhead- passive/aggressive capital of the world. I look forward to working with Guy and his crew putting in new lament flooring for us.

Description of Work
Restored a dining room back to a bedroom.

[member name removed] THANK YOU . IT WAS A GREAT PLEASURE WORKING WITH YOU. OUR UNDERSTANDING OF THE SCOPE OF THE WORK MAKES EVERYTHING GO SMOOTHLY. LOOK FORWARD TO DOING YOUR FLOORS AND SEEING YOUR WONDERFUL FAMILY AGAIN