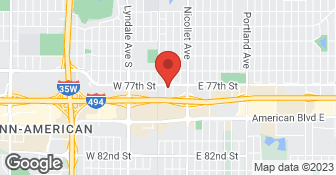 When you are in need of an expert plumber in the Minneapolis area, we are the only name you need to know! Since 1963, Aqua City Plumbing has become synonymous with trusted, reliable plumbing solutions, and superior customer care. We are a family-owned and operated company, made up of expertly trained and experienced Minneapolis plumbers....

DuctWorks is a small locally owned business. We are licensed, bonded and insured in Minneapolis, Golden Valley and surrounding suburbs. All employees have background checks completed. The following financing options are available: 18 Months Same As Cash - No payments or interest for 18 months!! - other options available - please inquire!  …

Metro Irrigation & Outdoor Services specializes in Irrigation Installation & Service. Our team has you covered from start to finish on all your outdoor projects as we provide Landscaping, Grading, Rock walls, Edging, Mulch/Decorative rock, Planting, Sod, French drains & Shrub trimming. We are a quality driven company that thrives to exceed our customers expectations while maintaining ethical practices in our industry. We offer an efficient and technical approach to all irrigation systems whether installed by us or others. An improperly Installed or maintained irrigation system can waste up 25,000 gallons annually. Our irrigation systems water use can be reduced by up to 15% compared to leading competitors. We proudly work hard to make your home or business stand out from the rest! I am present on all jobs and guarantee your satisfaction! Please call or click to schedule an estimate today!  …

NO water and 2.5 hrs later water back on. Best Plumber I have used in 15 years.

Description of Work
Replaced main water valve street side. Had NO water. Came and within 2.5 hrs water was back on. A+++++

The showerhead fell off breaking in the tub. They left a long-term leak in a drainage run from the tub to the stack. I had to tear out the ceiling and replace. Had to have work completed by another contractor.

Description of Work
Installed bathroom plumbing in walls along with new faucet/shower in tub. Also attempted to repair drainage to stack.

Hello [removed member name]. I am very sorry to read that you had plumbing problems, but we have no record of working in your home. Are you sure you listed the correct plumbing contractor? Aqua City warranties all of it's replacement work for at least two years but we have no record of receiving any calls regarding damage, warranty work, or even working in your home. Please call me to discuss. Dave - Aqua City Plumbing.
2.0

Last week, we had drain tile and a sump pump installed by another contractor. They had to disconnect our gas dryer and washing machine and they removed, at my request, an old concrete double-sink that I replaced with a plastic utility sink. I called Aqua City on a Friday and they scheduled an appointment for first thing Monday morning. The plumber called ahead to let us know exactly when he would arrive. His recommendation was that we not use the utility sink that I had purchased (admittedly, it's not of high quality and would require some plumbing work-arounds to hook up). He also indicated he would redo the gas line to the dryer. The estimate was so mind-bogglingly high that I asked a lot of questions. It took me a long time to get a sense of what each of his recommended services would cost. I felt compelled to get a second estimate and was shocked at how much lower it was for a similar scope of work.

We were happy with both the advice and the workmanship of this plumber.

Description of Work
We had a problem with water backed up in the drain of our unfinished basement. He came when we needed him and dealt with the problem by snaking the drain and severing and removing what was most likely tree roots in the main line. He worked carefully and efficiently answering my questions respectfully after investigating and before he started the actual process. He and his assistant cleaned up the area before they left.

Worst plumbing experience of my life. Aqua City totally took advantage of my wife and charged 5 times the going rate for some very basic plumbing work. Worse yet, the service technician was rude and lied to me about the work done when I got home and followed up with them. Worst ever!! Do not use Aqua City!!

Description of Work
Remove and replace a sink & faucet. Labor only - I supplied all parts and materials.

Single estimate, very over priced ($1200) versus the $125 that was actually charged when the service was done by a different plumber. Very disappointing for a locally owned business.

Description of Work
Single estimate, very over priced ($1200) versus the $125 that was actually charged when the service was done by a different plumber. Very disappointing for a locally owned business.

I called to make an appointment to get a quote. The sales person did not come on the scheduled day. They just sent me an email with the quote. The quote was scanned in a word doccument upside down. Because it was in word, I was not able to read the quote without printing it out. With these two blunders on "attention to detail" I went with a company that was a bit more expensive and much more detailed and professional in their quote.

I needed a plumber for an issue with the bathroom sink on January 14, 2010. The drain was slow, and after a couple attempts with drain cleaner, decided to have my son clean the trap. He found that the nut tying the trap to the pipe going into the wall had cracked, and the rubber washer that seals the sink drain seemed dry and brittle. I had used a company in the past for a slow laundry drain. They were great to work with, and did a fine job at a fair price. I called them to come out but was told they only do drain cleaning. I asked if they had anyone they could recommend and was given Aqua City Plumbing's number. I talked to Bob. They came out, assessed the problem, and said I needed a drain assembly, a trap assembly, and they would also have to snake the pipes. To replace the existing drain and pop assembly - $407.00. To replace the existing trap assembly - $216.00. Snaking the drain - $159.00 for up to 45 minutes (they spent about 10 minutes snaking). Being they were recommended by a company I trusted, I assumed that's what it cost, and gave them the go ahead. It was only after they were finished (it took them less than 2 hours for the entire job) that I started to think they over-charged me. So far, I have called five plumbing companies in the Twin Cities and was given basically the same price each time. To replace a drain assembly AND a trap assembly - $125.00 - $150.00. I found a union shop, which I assumed would charge the most, and was told $150.00 - $200.00. I went to Home Depot and a local hardware store to price the parts. Top shelf, polished parts were $40.00 (drain assembly AND trap assembly). I'm quite certain they didn't spend that much - they get their parts wholesale (yes, they mark them up). So, if we go with $40.00 for parts - that means $742.00 for less than 2 hours of work. I'm a 79 year old widow, and feel I was taken advantage of. I tried to make things right with Bob on Friday January 15, 2010 and Dave (the owner) on Wednesday January 20, 2010. I was told that's their price. I don't believe there's a plumber on the planet worth $350+ per hour.

Description of Work
They replaced a drain assembly and a trap assembly in a bathroom. They also spent 10 minutes snaking the pipe.

The work ended up being expensive. Everything was good. The quality of work was excellent!

Description of Work
I used Aqua City Plumbing to replace all of the plumbing underneath the sink.