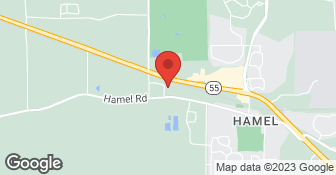 Grandview Shutters & Blinds LLC, is a Sunburst Shutters & Window Fashions authorized dealer. We have been serving local customers since 1998. Our design consultant will help you select the perfect window treatments to match specific colors & designs, save energy, block light & noise, increase privacy and more. Whatever you are looking for Sunburst can help. Our design consultant will discuss your window treatment options, measure your windows and provide you the best products for the job. Sunburst is committed to your satisfaction from purchase to installation of your product....

Excellent! George, Jake and team are so easy to work with. They really know what they are taking about and educated me on the in's and outs of plantation shutters. They were timely and punctual with delivery estimates. The installers always cleaned up their work area, were polite and punctual. Would absolutely recommend them!

I signed the initial contract on January 26, 2014 to order blinds for all five windows in my townhouse. I had initiated the project with Home Depot, but they subcontract to Grandview Shutters and Blinds. I was a little surprised that I was asked to pay for the entire project up front, although the salesman stressed that they don't get paid from Home Depot until the project was complete. Even so, I had to pay Home Depot right away. The salesman was very friendly, professional, and seemed knowledgable of the product. I was eager to get the blinds installed, so I went ahead. Because I had no window treatments at all at that point (after having new windows installed), they offered to put up temporary paper blinds in the interim, which they did. The paper blinds worked great! There had been a problem with one of the new windows, so Grandview wanted to wait until that window was installed to make sure their measurement for the blinds was accurate. Once that was done, the order was submitted and the blinds were ultimately to be installed on February 27, 2014. As soon as the first set of blinds were put up, I noticed the blinds were not split in the middle as I had ordered. All five sets of blinds had been made as continuous units all the way across. I have glider windows so I wanted to be able to raise one side of the blinds at a time to open the windows, etc. Jake, the installer, confirmed the written paperwork he had indicated all five blinds were to be split. He apologized for the mix-up, but then went ahead and installed the five incorrect blinds so that I would have something on the windows in the meantime -- which I appreciated. The salesman, George, also called me later to apologize for the mix-up. The blinds had to be reordered. I was notified that the correct blinds had been received by Grandview on March 19, 2014, but the earliest date they could be installed was March 31, 2014 (12 days later). I was a bit disappointed that after the delay that had already occurred, I wasn't given some sort of priority scheduling. At any rate, the installation was finally completed after a little over two months. I am pleased with the quality of the product, and the staff members at Grandview were always friendly and nice. I have only given the B ratings above because of the mix-up on the order, which I would think could have been avoided with better quality assurance. To be fair, I don't know, however, if the mistake was Grandview's fault or that of the manufacturer. As stated above, the paperwork did show the blinds were to be split. Grandview did not notice the discrepancy until one blind was installed though -- and only after I pointed it out.

Description of Work
I had new blinds installed in five windows.

Person initially came over with samples and discussed options and measured all the windows. After we de used to do business they ordered the shutters. Was told it would take about 8 weeks, but it ended up being over 10. 2 people came and installed in exactly the amount of time we were told it would take, 5 hours. Very pleased with the professionalism of all and the quality of the shutters and install. Worth the wait.

Todays experience with George, the new owner of the Edina location, brought to mind, once again, my satisfaction with the product and the good service I have received from others that worked for the company in years past. Dawn, George's wife, was friendly to talk with and arranged the appointment. She said that there would be no charge for relocating the hinges. The shutters are several years old now. To me, that is awesome customer service. George was prompt, friendly, respectful of my home, and did a great job. George stated that he has worked for the company for 15 years. He knows his product well and helped me make an informed decision regarding my future order for shutters that I want to do differently than my other ones. The older shutters have been great at blocking out the cold, heat, and light, plus they are easy to clean. They have not warped and look as new as the day they were originally installed. Plus, today and during the two times past when shutters were installed, the workmen explained things about the shutters and showed me little tricks of the trade that I appreciated. I am still recovering from a very, very bad experience with a home remodel contractor and to have this day with Sunburst Shutters go so well was a relief and a treat. I love the and quot;expandedand quot; views from my windows that changing the hinge locations have made. Thank you again, George. The submitted photo is of our home office. Changing the hinges to allow the shutters to fold back is great for the view. Both windows now have the same hinges, but we can appreciate the view outside all the more when the shutters fold back.

Description of Work
I am a repeat customer of this company that makes and installs inside window shutters. Nine of my windows have been treated with polywood shutters. Today I received a quote for a future order and had some hinge changes made to the existing shutters. Now the shutters can fold back to one side only rather than open down the middle with a shutter on each side. For me, it works best.

Thank you member! We appreciate your business and we hope you are continuing to enjoy your new expanded views.

MINNEAPOLIS WINDOW SHADE HAS BEEN PROVIDING PERSONAL, PROFESSIONAL SERVICE SINCE 1914. WE ARE A FAMILY BUSINESS WITH AN EXTREMELY LOYAL CUSTOMER BASE - IN MANY CASES GOING BACK GENERATIONS. WE SERVE BOTH RESIDENTIAL AND SMALL COMMERCIAL CLIENTS - WHETHER IT IS ONE WINDOW OR YOUR ENTIRE PROPERTY. LET US PUT OUR EXPERIENCE TO WORK FOR YOU -WE DO FREE IN HOME CONSULTATIONS AND YOU CAN ALWAYS VISIT US AT OUR SHOWROOM. ESTIMATES ARE ALWAYS FREE AND WE ACCEPT ALL MAJOR CREDIT CARDS.  …

No License Required for Trade
Insured
All statements concerning insurance, licenses, and bonds are informational only, and are self-reported. Since insurance, licenses and bonds can expire and can be cancelled, homeowners should always check such information for themselves.To find more licensing information for your state, visit our Find Licensing Requirements page.
General Information
Free Estimates
Yes
Eco-Friendly Accreditations
No
Payment Options
Check, Visa, MasterCard, American Express, Discover, PayPal
Warranties
Yes

We do NOT offer window tinting film or soft window treatments like drapery or drapery hardware for the home.

Sunburst Shutters & Window Fashions is currently rated 4.5 overall out of 5.

No, Sunburst Shutters & Window Fashions does not offer eco-friendly accreditations.

Are there any services Sunburst Shutters & Window Fashions does not offer?

We do NOT offer window tinting film or soft window treatments like drapery or drapery hardware for the home.