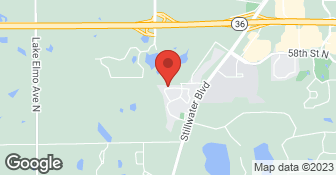 Apex Construction Inc. is a general contracting company that focuses on exterior remodeling in MN and western WI. We offer free estimates and storm inspections, accept all forms of payments, and offer specials throughout the season on all our services. We have over 30 years of experience and hold an A+ rating with the BBB since joining in 2004. Apex Construction Inc. is a Preferred Contractor through Owens Corning and also a part of the Top of The House Insulation Program through Owens Corning....

Great job. Pete was great to work with. He was very flexible to meet all my needs and wants. I would hire them again in a minute.

Description of Work
Complete tear off of my roof and re-roof on my house.

Excellent work and organization of subcontractors. Easy to work with. The project took longer than expected to close out due to some overbooking on their part and communication mishaps on both our ends. They were forthright about this and we worked through smoothly. Would definitely use again for remodel work.

Apex re-roofed my house in 2005. I recently saw some water inside my screen porch after a big rain storm. I didn't know if it was "blown in" or if I had a leak from the roof. I called Pete and left him a message about my concern. They called me back within 2 days. Came by the next week. Pete went up on the roof inspected it and said it was fine. While he was up there he re-tarred some joints between where the screened porch intersects with the main chimney and the rest of my house. I really appreciate their quick response and follow through to check out my concerns. I think it is a good company that comes right out even though the roof is 10 years old. He didn't charge me a dime for coming to my house.

Description of Work
Inspected a part of my roof that I thought might be leaking. Re-tarred some joints.

We were very impressed! We met with SIX different roofers. We eliminated two due to poor reviews here and on Better Business Bureau, and another because I didn't care for the representative the owner sent out. Of the remaining contenders, Apex had the best price. He also came recommended by an acquaintance. Pete was very responsive, and even fixed our roof leak himself to get us through until his crew could replace the whole roof. He came to our house TWICE to meet with us before we even agreed to hire him. His answers to our MANY questions were good--and patient!--and I never got the sense he was trying to trick us. Pete also thought ahead to ask about our pets, and we made arrangements to leave them elsewhere that day. It may not have occurred to us that the commotion would bother them, but in retrospect I know the dog would have been extremely anxious if we'd left her in the home alone while the work was being done. Pete took care of the permit with the city. His crew arrived at 7:30 in the morning, as promised, and worked all day. They finished the entire project around 10 p.m. Our neighbor is in construction and was very impressed! Since they were finishing up in the dark, they did miss a few things cleaning up (a shovel in the backyard, some loose shingles left on the roof). But I emailed Pete, and he came out and took care of it right away. We never found a single nail in the yard or driveway, which is impressive given how many there must have been given the square footage and double layer. We discussed having Apex put in solar tubes, but I got the sense that was not their specialty so we went with a company that specializes in just that. I'm confident that was the right decision.

Description of Work
Re-roofed our house (there were a lot of squares and it had two layers of shingles).

Apex always does a great job and is conscientious about completing the work professionally.

Used this company twice for ice dam/roof snow, in 2011 and 2014. They communicate when they expect to arrive, then make followup calls to refine the time window -- which we appreciated in this peak-overload type of work.. They are efficient, prompt and courteous, and hold their quoted price.

Talk about standing behind your work. Apex replaced my roof 3 years ago and does roof snow removal in winter. I called for diagnosis on a roof leak over backdoor - the inside plaster ceiling collapsed and old lathe was showing from a leak. Pete and Adam responded quickly and came by to diagnose. The roof shingles and underlayment from their work looked OK so they took a garden hose to the roof to see if/where the leak was occurring. They found a crack in the stucco and holes in the window trim based on location of water flowing inside. Adam caulked the areas and suggested we see what happens when it rains next to determine if further repairs are needed (stucco?). They said to let them know what happens as they want to be sure the roof is not leaking. I was surprised they did not charge me as I was expecting at least a 1 hr charge. Very professional and great customer service. Would recommend for any roofing needs.

This is the third roof we've replaced due to hail damage. With APEX, everything went great from estimate through completion. Our previous roofer was no where in the same league with APEX. Pricing was very competitive. Work was performed professionally and within a reasonable amount of time. APEX kept us informed on the how the job was going. The work crew kept the work site clean and did an excellent job of picking up loose nails. We're extremely satisfed. The only thing I would recommend is to get together with your bank early to figure out what their requirements are for processing insurance checks. Since our checks needed to be cosigned by the bank (U.S. Bank) it became kind of a circus trying to get funds disbursed by them...they'd say the money was on the way, but it wasn't...held up by a another requirement. APEX was very patient through this process. Note that the roofing crew that replaced our 2nd roof that was previous to this one was anything but professional or timely - the work crew had to return several times to get the job right and in fact returned several times to tear off work they had already completed because it was done incorrectly. They didn't keep the site clean and I had to go out searching for loose nails all the time as we were getting flat tires on our cars from their inability to keep it clean.

Description of Work
Re-roof after hail damage including damaged skylights.

Pete and Adam worked professionally, quickly, and with respect for the townhome owners, and property. They got the job done and cleaned up afterwards in the time promised, even with a couple of rainy days thrown in.

PETE AND HIS PARTNER, ADAM WERE DOING WORK IN OUR NEIGHBORHOOD. I ASKED THEM TO COME AND GIVE ME AN ESTIMATE. I INDICATED I WAS HAVING PROBLEMS WITH MY GUTTERS. THEY CLEARED THE GUTTERS WHILE THEY WERE LOOKING AT THE ROOF TO PROVIDE AN ESTIMATE. THEY WROTE ESTIMATE THAT DAY. I GOT A SECOND ESTIMATE AND APEX WAS VERY COST COMPETITIVE. THEY DID THE WORK AS SCHEDULED AND FINISHED IN 4 DAYS. THEY COMMUNICATED WITH ME EACH DAY ABOUT WHEN THEY WOULD BE THERE, WHEN THEY WOULD BE DONE AND ANYTHING THEY HAD FOUND. THEY PICKED UP BEFORE THEY LEFT AND THE INSPECTOR HAS COME AND APPROVED THE INSTALLATION.