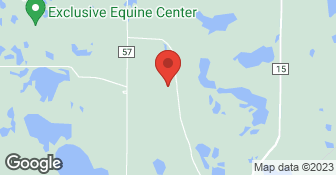 What was supposed to be a key feature of our new home turned into an eye sore!!! We hired Josh to do our concrete flooring for our new build, based on good reviews and he seemed to be a good all around guy. We wanted a matte black concrete floor, which he said that he would be able to do. The pour went good, and there was a lot of factors to take into consideration, so even though there were areas that got burnt, he did a good job. If only he had taken pride in finishing the floor. First off, the "finishing" took over a month. It wreaked the whole floor. We had splotches of white coming out of the floor & to deal with it he kept putting on more sealer, put on way to much, so that there is ripples in the floor with lint from his roller. This is not even the worse part, our floor is mostly white splotches, and it is shinny, a BAD combination! To make matters worse, Josh tried to get my husband to do the waxing and still wanted to get paid! After cursing out my husband, Josh's dad called really mad, and my husband told him he just wants the job done & we have been waiting a month for it to get done. His dad said he'll send him over right away. I went to the house half an hour later because I wanted to talk to Josh & not leave things on the wrong foot. Well I got there & he was gone. The whole living room had not been done, only parts of the kitchen & back entry. My husband called his dad, & he said maybe the wax had dried fast?really.. when the parts he actually had done were still wet? We are still waiting for him to come finish the job but I'm sure that won't happen! I think we paid him too much initially and did not withhold enough to make sure he cared to finish the job well. We paid A LOT of money for our floor, and now it has to get redone, so disappointing! We had a REAL professional look at it and he said it would have to be stripped down and redone. As goofy as Josh seems and I'm sure he's done good work, your taking a big risk hiring him and putting a lot of money at stake. We had 3 people pull out from using him, which I'm glad about since I don't want them to take the risk of hiring him.

My wife and I are very pleased with their professionalism and know how. Highly recommend Lehmicke Construction to anyone who needs concrete work. They are awesome! Thanks!

Description of Work
Greg and his crew put in a new sidewalk and steps on the side of our house. It was particularly difficult as we have water runoff issues. They came and put a new set of steps and new sidewalk in very quickly - and they built a grade into the walk to direct runoff water to the sides of our yard instead of it pooling in the middle of our walkway.

Lehmicke Contruction did our stamped concrete and side walks for our home when we built it in 2005. He put in 2000 sq feet of stamped concrete around the back of our home( which has absolutely ZERO cracks in it!!!). When we put our pool in this past year, we wanted to have Greg come out and do the concrete work. We were going to loose a portion of the existing slab, but were hopeful that Greg would be able to match the deck with the 9 year old slab. Despite the insistence of the pool company to use their concrete guy, we trusted Lehmicke to get this job done. Here is what I can tell you about Greg. He is kind of a goofy guy who is not the most professional, but he and his son, Josh, do FANTASTIC work for a very reasonable price! I read the other review and laughed, because that is exactly what it is like doing business with them. He asks for money at random times and adds things on to the bill at the end, BUT, I can tell you that my patio and pool deck are GORGEOUS and it looks like all 3500 sq ft were poured at the same time. He took special care to make sure that it had enough grit on it so kids weren't slipping. He also made a really cool step coming off of the patio that I just LOVE!!!! Even with all the time and extras at the end of the job, he still saved us at least $10,000 in concrete! That is just unbelievable! Stamped concrete is soooooo expensive! If you take the chance on a local guy, you will be so happy in the end! All that being said, I would definitely use this company again. They do great work and for a very great price. Greg isn't the most professional guy, but he does amazing work and is really knowledgeable about concrete. He will do a great job in the end!!!!!

Description of Work
Pool deck and extension of existing patio.

Due to water issues in our basement we had to have our backyard leveled and regraded. We had a pool with existing concrete surround and pavers for the rest of the seating area.Everything was demoed. Our main contact was Josh Lehmicke, the project manager. He was very knowledgeable and enthusiastic about concrete. He met with us several times to go over project details before construction began. He did talk too fast so it was sometimes hard to understand some of the finer points of how things were done. We also had them pour a new sidewalk to the house and a new apron to our front garage. The crew was timely and friendly. I did catch them peeing in our bushes a few times, they could have been a little more discreet. When demo began around our pool the men just jack hammered right next to the pool. I did express my concern about material going in the pool but was told it had never been an issue on past projects. However, I could see bits plopping in the pool as they worked. Our original agreement was payment upon completion. However, Josh approached me for funds after a few days. He said his Dad, who is the owner and general manager, asked him to collect money. I did give him 1/3 at that time. Had this been our original agreement this would've been fine. Toward the end of the project the owner Greg, rang my doorbell and asked me for the rest of the money. This may have been one to two days before completion. He told me he needed the money to finance his next job. I told him I was unable to pay him in full until the project was completely finished. I did give him another 1/3 at that time but withheld final payment until the project was complete. Which was actually just replacing some fence but I would not give final payment until the whole project was done. I could tell that Greg and Josh were unhappy about this. Josh also contracted out for me a carpenter to build back steps for our house. The original quote was $750. When I said that I would not pay final payment until all was done including the steps, he then told me that the carpenter was charging us $850. I asked him why the price change and he shrugged and said and quot;I don't know.and quot; Turns out, the next day her told me he was charging me a $100 contracting fee for the stairs since I did not want to pay final until the whole project was completed. He should have just told me that upfront instead of blaming the carpenter. I did not appreciate the lie. I decided to save myself the $100 and just trust that the carpenter would show up and I paid him directly myself. I felt like I was being gouged out of $100 after paying $28k! Upon completion we had a pool company come out to help us get our pool back in shape. The pool was very green bc it was so rainy. While vaccuuming the pool, concrete pieces were sucked into our sand filter damaging it to the tune of $800. Once, we got the pool balanced enough to swim in, I dove down to the bottom and pulled out fist size pieces of concrete and also rebar as well. No care had been taken to avoid leaving all this garbage in our pool. I probably had about 3/4 of a big concrete mixing bucket full of chips in my pool. And also several of their rags and a tshirt of the crews went into the bucket as well! Because the rocks damaged my sand filter, sand spewed into the pool creating an even bigger mess. We have a small permanent rust stain from a piece of rebar. My husband called Greg Lehmicke and spoke with his wife who told us he would return our call but he never called. The finished project is very nice. It looks amazing, but the billing issues, the small untruths and the damage to my pool left me with a bad taste. This company has done a few driveways in my neighborhood and they look nice and have held up well. But after these issues and spending a huge portion of our savings and we don't even rate a phone call back from the owner (we paid him so really, why should they care?!) I just have a hard time feeling great about the company. I would recommend them with extreme reservations.

Description of Work
poured new concrete pool deck and front walkway and new front apron into the garage, leveled back yard for drainage

In business since 1972 and specializing in smaller scale work. Free Estimates. No subs. Cost determined by job. Leave a message on machine.  …

We specialize in all decorative concrete, stamped concrete, acid stained concrete, micro toppings and overlays, masonry, concrete steps, concrete driveways, we do anything in concrete.

How is LEHMICKE CONSTRUCTION overall rated?

LEHMICKE CONSTRUCTION is currently rated 3.5 overall out of 5.

No, LEHMICKE CONSTRUCTION does not offer a senior discount.

Are warranties offered by LEHMICKE CONSTRUCTION?

No, LEHMICKE CONSTRUCTION does not offer warranties.

What services does LEHMICKE CONSTRUCTION offer?