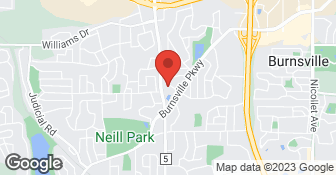 37 Years in buisines in the Twin City Metro area building new homes and remodling. Free estimates. We specialize in water intrusion discovery and repair. Cause may be anything from storms to defective workmanship or material defects. We handle all types of insurance work from any cause. We have the lastest technology Infrared equipment to help determain the cause of water intrusion or heat loss. My years of experiance as a full service General contractor have given me the knoldge to determain the cause of problems quickly. Making us very cost efficent

The job was to replace a custom double mail box post that was destroyed by a vehicle this past winter. After some searching I found Gene Eldeen, d.b.a. Everlasting Homes Inc. of Burnsville MN. The provider accepted the job and payment to be made by Farmers Insurance. Many weeks and many unanswered phone calls and e-mails went by before a temporary box post was installed. The provider took the damaged custom post to use as a template. It is now August 4 and there still is no new mailbox post. Attempts to speak to the provider have gone mostly unanswered. The few times I was able to connect resulted in another excuse as to why the job has not been completed as promised. On June 26 I filed a complaint with the BBB. As of today the business has failed to respond to 3 notices sent by the BBB. The last time I spoke to Mr. Eldeeen, around 7/15, I informed him of the filed complaint. I asked that the job be completed so I could close the complaint favorably. I also asked that if he did not have any intention of completing the job as agreed,to .please send me a note stating this. I would like to be able to find someone to complete the job but feel I am in a binding agreement with Everlasting Homes. The initial emails between Mr. Eldeen and myself would be considered an implied, if not written contract. And also that he completed a small amount of work. All I want is to have the new mailbox post installed. No other contact from the business. Still being ignored. I am afraid this will end as a legal matter. 8/7/14 Spoke to business owner. Still not willing to complete job as promised. He 'didn't know what to tell me'. Six months and the job has not been completed.

Description of Work
Provided a temporary mailbox post while new custom wood post was to be constructed.

Rapid Glass is your local family owned Home Glass Repair and Auto Glass Replacement experts. We provide "Quality Service at an Affordable price". Whether you’re replacing one broken or cracked window or all the windows in your house have bad seals, are fogged and have condensation or moisture between the glass panes, we are sure to save you money. We are experts in design and installation of Custom Glass Shower Doors, enclosures and glass shower panels. Shower doors can be framed or frameless with different patterns of glass. Whether it’s a bathroom remodeling project or you want to update that broken or water stained shower door. Shower door installation is a breeze with Rapid Glass. Our auto glass replacement and windshield repair technicians are certified and install only the highest quality glass at an affordable price. Whatever your glass needs may be, we will provide fast, affordable service to most Minneapolis and St. Paul suburban areas.  …

Insured
All statements concerning insurance, licenses, and bonds are informational only, and are self-reported. Since insurance, licenses and bonds can expire and can be cancelled, homeowners should always check such information for themselves.To find more licensing information for your state, visit our Find Licensing Requirements page.
General Information
Free Estimates
Ask for details
Eco-Friendly Accreditations
No
Payment Options
Check, Financing Available
Senior Discount
No
Emergency Service
Yes
Warranties
Yes

Everlasting Homes Inc is currently rated 3 overall out of 5.

No, Everlasting Homes Inc does not offer free project estimates.

No, Everlasting Homes Inc does not offer eco-friendly accreditations.

No, Everlasting Homes Inc does not offer a senior discount.