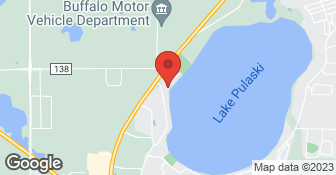 Curb Creations assists homeowners in enhancing aesthetics, reducing maintenance, and adding value to their home and landscape. We do this by providing an elegant, durable, professionally installed decorative concrete landscape curbing backed by superior training and 29 years of installation experience. We give you more value and less worry. We will be here year after year...and the year after...and the year after that. You can find "cheaper" but we've found in our industry that you most often get what you pay for. With 8,143 satisfied clients in the Twin Cities area, our name is our guarantee....

It was fantastic! They did exactly what they said they were going to do, and it was awesome.

Description of Work
They did landscaping curbing for me.

Unfortunately, we never had the work completed after putting our deposit down at the end of April. After waiting 6 weeks past the tentatively scheduled install week and having no work done by July, I cancelled. I had called several times and just kept being told they would call next week to schedule. No one ever called and each time I called and asked, the time frame was extended. We referred our friends to use them and they put a deposit down 1 week after us, their work was done 2 weeks ago, we still have nothing. When I finally called to cancel the owner was full of excuses and flat out rude. She agreed to refund my deposit minus a 20% admin fee. I guess I'm paying for them to schedule other people with that admin fee and my work will never be done. Sadly, I used them 5 years ago at a previous home and they did great work and were very friendly. I will no longer be recommending them. Update: I called the following day and was told I would receive my full deposit back.

We hired curb creations to create the border around the landscaping all around our house. They were extremely well organized and professional. On the day of the work, they were extremely efficient and have this down to a science. The entire project took less than 2 hours and did not sacrifice quality whatsoever.

The saving factor in this transaction was the fact that the edging looks great. The estimator came out when he said he would, I was not able to be home so he left the bid sheet. Scheduling was rough, I didn't hear from anyone for weeks, I called several times, the gal in the office always took my info and indicated someone would call, this went on for a few weeks past the original time I was given for install. The guys came within their window once the time was scheduled, my Fiber line was cut in the process, I realize that it is not their issue if the internet company did not bury it properly but the short, snappy and rude response from the crew when it happened was inappropriate. The end of the transaction was the worst of it. My bid sheet had two bids on it - there were different square footages and a price for each estimate (95' and 155'). I had called prior to the work and was told that there was a price break at 100'. So I assumed the price I was given for the 155' would be the price of my project. When I got my invoice the price was different, when I called to ask about it, I was yelled at and told that even though they acknowledged that I was told there was a price break at 100' that it didn't mean I would get the price on my quote because that was for a different square footage than what my project actually ended at. When I asked where that was noted or how I would know where the price changes were, I was told they are not going to give their customers their price sheet and he continued to yell. Be sure to get square footage prices for every 25/50 square feet so you are not surprised at the end.

Outstanding very professional did everything they promised Took time to consult on design gave there opinions on color Etc Just a great crew!

Dave is a nice guy and does quality work but his customer service and professionalism is lacking. We specifically gave him our business after his sales guy told us they'd remove the sod for us in the areas where new edging was going in around our fence. This was clearly stated in our written estimate. The multiple bids we received were competitive so this is the only reason Dave got our business. On the day of installation they did not take the sod out and my husband and I spent 40 hours pulling it out by hand. It would have taken Dave's crew less than an hour to do it themselves with the sod removal tools they had on hand. Needless to say we weren't pleased and called Dave to negotiate something in return for this. Dave told us his company doesn't take the sod out. Well, that's not true because it was written up in our estimate. In the end, it took 7 months for him to agree to do some additional work for us for free that we had agreed to 7 months prior. The sod issues aside, I was less than impressed with his scheduling system. I am understanding that they can't guarantee a specific day due to rain, but to be strung along for weeks and months until they could get a crew "in our area" was extremely frustrating. In the end we were happy with the quality of the work and the outcome of our situation, it was just a frustrating 7-month journey.

The salesman, Jack, was very prepared for this spiel and quite persuasive. I got quotes from 3 other sources and Curb Creation was able to match the lowest one - $8.50/ft. Scheduling though took almost 4 weeks; too long in my mind. Also, the workers were good, knew what they were doing, but for a couple of things: 1. A couple of guys were smoking on the job 2. When I asked them to redraw one portion (this is just with the white paint) they seemed a bit put off with the "rework". Overall, I'd hire them again and recommend them.

Very well. Took them a bit of time to get out here, but they said they were busy. I found them easy to work with. I liked their attention to my issues and good suggestions. The install was completed in about half a day and looks great.

They were just excellent. Excellent quality of work. Great to work with and cleaned up nicely. We have had so many compliments and will definitely use their services again.

Description of Work
They did a lot of cement curbing around our gardens.

Several years ago I picked up a brochure for Curb Creations and really liked the design. It was always in the back of my mind. So when we decided on our new landscaping project I did some more research into curbing options and decided to go with Curb Creations. Adam came out and gave me an estimate. We scheduled a date and the owner and his crew arrived promptly. Their website shows patterns and colors. The colors online are very different from what is in their color selection book (computer colors never match actual colors). It is hard to select a pattern but my suggestion is to choose one with a vertical line so that the cuts they make about every 2 feet won't show. On the day of installation you will choose your style, pattern, color and highlight colors. Then they begin prepping your area. They setup their equipment in our cul-de-sac and even swept the area when they were finished. First they mix the concrete with the color and then wheelbarrow it to your yard. It is formed into the selected style and then laid out. Another person stamps in the design and yet another adds the color contrast powder. It is finally sealed with a curing seal. The crew laid 465 feet of curbing in 1 day. It has been a few weeks now and the curbing holds up nicely. Even when the landscapers were rolling wheelbarrows full of rock over it. We are very happy with the curbing. It looks nice and holds back the rock without any spillage. If you are scheduling a big landscaping project I suggest the following order: 1. Remove existing landscaping (if applicable) 2. Prep areas 3. Install plants 4. Install irrigation (if applicable) 5. Install curbing 6. Then add rocks and/or mulch

With over 25yrs of combined professional remodeling experience! We are locally owned and operated and understand the importance of getting the job done right and in a timely manner the first time! We are your one stop shop for all your interior and exterior remodeling needs we will ensure that you're extremely happy before we leave your premises! Give us a call today for your FREE estimate! We look forward to servicing you!  …

Richard Heflin LLC is a small, family run masonry company with generations of experience. We have the ability to complete any masonry project, so if you need anything from the smallest repair to large scale projects, we have the crew to handle it.  …

We pride ourselves on installing all projects to the best quality, industry leading standards and warranties, and the best aesthetics possible. Every project is done with a customer first approach, straight forward pricing and a no non-sense policy. This is evidence in the fact that referrals and repeat business is what makes up a majority of our work load. We have great people who help make this possible, everyone in the Natural Stonescapes team is respectful of home owners and property, committed,, and take pride in all the projects we complete! Natural Stonescapes also gives a portion of all profits to various non-profit organizations, churches, our community and food shelves, both locally and beyond.  …

Curb Creations installs a decorative concrete landscape edging for residential and commercial use. We replace other inferior borders such as black plastic, rotten timbers, bullet-nosed edging, pavers and rock.

We work hand in hand with many of the finest landscapers in the Twin Cities area who specialize in various aspects of the landscape industry. We will recommend and work with these experienced companies to bring your job to completion.

How is Curb Creations overall rated?

Curb Creations is currently rated 4.6 overall out of 5.

What days are Curb Creations open?

No, Curb Creations does not offer eco-friendly accreditations.

No, Curb Creations does not offer a senior discount.

Are warranties offered by Curb Creations?

What services does Curb Creations offer?

Are there any services Curb Creations does not offer?

We work hand in hand with many of the finest landscapers in the Twin Cities area who specialize in various aspects of the landscape industry. We will recommend and work with these experienced companies to bring your job to completion.