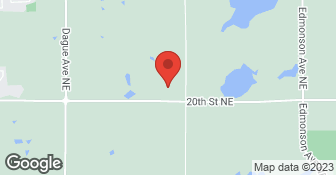 We have 30 plus employees. Owner-operated. Use subs for plumbing. Charge hourly rates. Installation work is by bid. No travel charges. No service fees. Free Estimates. Award winning.

The spring service was excellent. The 2nd repair was not good. The serviceman came unprepared and had to return. He wasted time and was inefficient. As the serviceman made two visits we also paid two invoices for the 2nd repair.

Description of Work
Spring start-up, head replacement. Had them back 2 months later to repair system as it was damaged and front yard had no water.

I didn't like them very well. The quality was okay, and I got charged a bundle more because I had not had the sprinkler system going year after year, which is understandable. But he did something that he said he would not charge for, and they took it off my credit card without my permission and I was not happy with them when I saw my credit card statement. I don't appreciate people using my card without my authorization, it is not professional, and I think they still owe me money back for that service.

Description of Work
I purchased a deal for $69 for Sprinkler Winterizing and Blowout.

Description of Work
Sprinkler tune up.

Did not come out when said. Already 3 weeks late for second application.

He was a nice young man. He was very gracious. He did a good job the second time. I checked it over. I pointed out what I wanted fixed correctly and then I let him do his thing. Then I turned the sprinklers on and checked the direction and spray after that.

Description of Work
The technician came out and redid the calibration of the irrigation heads.

It turned out the work I needed have done would have been more expensive than what my regular guy would have charged. I spoke with Joy Beckman in their offices through email, she very nice and easy to work with. Scheduling also wasn't going to work. My sprinkler guys is getting closer to retirement and I will most likely use this company when that time comes.

Description of Work
I had purchased a deal through Angie's List for them to do a sprinkler tune up and efficiency assessment.

GREAT! arrived on time completed work in good time pleasant to work with answered questions in a professional manner

Performed service in a prompt and proficient manner.

Very easy to work with, professional and good results. I recommend!

Description of Work
I needed sprinkler tune up and repairs.

They are very good. I would definitely use them again.

Description of Work
They irrigated our lawn yard.

They don't schedule enough time to provide the requested service so they have to come back. This works to their advantage because they charge you for a whole hour ($70) even if they're there just 10 minutes. They determine the time based on the GPS tracker in the service vehicle. Both times the guy sat in his truck for 30 minutes after he was finished. Work was completed but 2 sprinkler heads still don't pop up.

We hesitated to write this review because the guys who did the install worked so hard and did such a good job explaining the irrigation system. However, we had, and continue to have, problems with this vendor. At about 8:30 on the day of our scheduled install, we received a call saying that they were behind on a commercial job and wouldn't be able to make the appointment. I had already taken the day off from work but agreed to the next available install date. Fairly early on during the installation a week or so later, the head guy knocked on the door to say that their office had forgotten to call the utility marking service and they had just cut our cable line. We were without internet and TV for about a week until Comcast could schedule a repair crew. As I said, the install crew seemed very hard working, so we didn't give a bad review. A few months later, one of the irrigation runs wouldn't shutoff and I called in the repair in under the promised 2-year parts and labor warranty. They had an appointment a few days later, but sent me a bill for the service. Despite several efforts to communicate that they shouldn't be billing me for warranty work, they continue to send late invoices every thirty days and have threatened turning our account over to collections. We can't recommend this vendor due to the multiple problems that, unfortunately, they don't seem interested in resolving.

purchased a big deal for landscape plan and quote in May, 2014. Multiple attempts (phone calls) to get someone out to complete the review of project. Once they responded, very prompt but too late in season to begin project. Quote and plan was provided.

Description of Work
provided a quote for landscape project.

Fast, on time and on price.

Description of Work
I purchased a big deal for Advanced Irrigation Inc for $69 Comprehensive Sprinkler Tune-Up.

There were some communications hiccups when I first purchased the order, which was a bit frustrating. However, once we got beyond that, communication, responsiveness and punctuality were all good. Will probably use them next year to finish the back yard.

Very professional and thorough. Would definitely use them again.

Our appointment was at 4pm, made a month in advance. My husband left work early to be here for the appointment. The provider didn't show up until 5:20pm, did not answer the phone when I called at 4:45 to see where they were (and still hasn't returned my call), did respond to an email at 5:30 to say someone would be there in the next hour -- which indicates to me they think an acceptable time to arrive is as much as 2.5 hours after the appointment time. Very frustrating to make special arrangements for a home service provider and not have them respect that time. if they had called to inform me they were runningl ate, this would be a very different review. The work went well and was done quickly which was a plus.

Description of Work
Winterizing and blowing out of sprinkler system

Excellent; I spoke with Joy at their office several times and she was professional and helpful.

Description of Work
I purchased the deal through Angies List for winterization of the irrigation system at my house.

there was no service or estimate

I apologize {Member's name}, you and others caught us at a time we were so busy that we could not keep up with the demand of our landscape services.
1.0

Took them several weeks to even contact me to make an appointment. The guy finally met with me, said he'd have a landscaping plan for me the following week, and I never heard from him again. No one answers the phone so I left several messages throughout the summer, and got no response. I contacted Angie's List to get a refund of the fee that I paid (it was one of their email specials) and I was informed that they can't do a refund because it's outside of the 30-day window. I was probably outside of the 30-day window by the time the Advanced Irrigation guy finally met with me, but I still only got the amount I paid put on credit to use toward a future Angie's List deal. Both Advanced Irrigation and Angie's List get an F on this one! This membership is totally not worth it.

Description of Work
Absolutely nothing, as far as I can tell.

Hi [Member name removed], We appreciate your time and I do apologize you caught us at a time in the season when we were extremely busy and were not able to keep up with the high demand of our landscape services.
3.0

It was not as well. They needed time with doing work-up for the plans. We tried to hire them to actually come and do some work. They just kept putting us off. Finally after the second or third time, I just decided to go with somebody else. There were no additional costs. It was a big job and they never showed up. It took them a while and they were backed up. It took them 2 or 3 weeks. They were just too slow in responding.

Description of Work
I purchased a "Big Deal" for Advanced Irrigation Inc. It was for the landscaping evaluation and plans.

VERY WELL, THEY CHECKED THUOGHTLY ALL SPINKKLE HEADS AND REPAIR SOME , MY HUSBAND LIKE THEM AND WILL USE THEM AGAIN FOR FALL TURN OFF SYSTEM

Description of Work
TUNNE UP MY SPINKIE SYSTEM.

Provider was responsive and punctual. The service technician was very friendly and explained everything that he was going to do. He also was very clear on some of the additional work I needed so that I was aware of the additional costs ahead of doing the work. There was one sprinkler head that was missed in making sure it turned on and was spraying correctly. It popped up a few weeks later, so I did not call to have them come back.

Description of Work
Provider repaired a couple of sprinkler heads and fixed a severed underground line on top of the spring tune-up.

Great! Very thorough and did a very good job.

Description of Work
Fixed multiple broken heads and other aspects of the overall system.

Richard Heflin LLC is a small, family run masonry company with generations of experience. We have the ability to complete any masonry project, so if you need anything from the smallest repair to large scale projects, we have the crew to handle it.  …

Construct the yard of your dreams with MEB Enterprises! We are a full service landscape and excavation company ready to help you customize your home landscape from site prep all the way to your dream landscape design! Whether you are looking to add new plants, revitalize your mulch, restore your driveway, or completely redesign your landscape, we can help. We can also supply and deliver landscape materials including mulch, aggregate, and topsoil. We bring our 20 years experience and excellent customer service to help you take your home from an overgrown lot to the finished landscape that will make your outdoor space your new favorite place. We are able to assist you with site preparation including land clearing, demolition, excavation for foundations, driveway construction or replacement with asphalt, stone, or pavers, land grading, landscape design, mulch, stone, planting and more! Our owner is a local firefighter and we bring a service mindset to our customer service. Give us a call to schedule your estimate!  …

Advanced Irrigation Inc is currently rated 4.4 overall out of 5.

No, Advanced Irrigation Inc does not offer eco-friendly accreditations.

No, Advanced Irrigation Inc does not offer a senior discount.