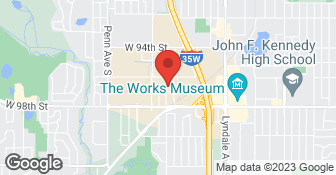 The Lawnsmith provides reliable lawn maintenance & snow removal services for residential and commercial properties. With more than 20 years of lawn care service experience. We understand what you are looking for in a lawn maintenance company. We will strive to exceed your expectations by providing outstanding customer service, reliable and quality maintenance, excellent value and personalized care to meet all of your lawn maintenance needs. We hope you allow us to demonstrate why The Lawnsmith is the maintenance service provider for you....

We are a full-service landscape company specializing in design & installation. Van Buren Landscape is committed to providing quality work and professional results. We offer many selections to meet a wide range of interests. You may choose a soft scape with a variety of plant selections, or a landscape area complete with sidewalks, retaining walls, and a patio for entertaining family and friends. We endeavor to help you gain knowledge about your landscape both during the project and in the future.  …

Shadywood Tree Experts & Landscaping does more than just tree removal and stump grinding. We also focus on treating tree diseases and pest control (like the Emerald Ash Borer, Dutch Elm, etc.) as well as fertilizing trees in the urban environment. Our I.S.A. Certified Arborists will come give a free evaluation of your trees, giving the best suggestions to keep your trees healthy & sound. Landscape services are also available through our company, including hardscapes (patios, retaining walls, firepits, outdoor living rooms, etc.) as well as softscapes (landscape designs and plantings). We are open M-F from 8am-4pm and would be happy to schedule an appointment to meet your needs. Remember to mention Angie's List and get $20 off (some restrictions apply). We excel in exceeding our client's expectations and can usually perform the work within days of recieving the go ahead. We will gladly offer recommendations as to what should be done immediately, as well as what can wait to be done at a later date. We work with many of the city forresters in the areas we service and we have extensive experience with townhomes, condos and other homeowner associations along with private residences. We are licensed wherever required in our service areas. Each of our tree crews has at least one I.S.A. Certified Arborist on the job, and each of our estimators also holds this specialized certification. We have a separate Plant Health Care Division staying up-to-date on all of the current pests, diseases, etc. posing problems in our area. We are especially vigilant in keeping tabs on the sightings of the Emerald Ash Borer, which has already moved into South Minneapolis. We offer the equivalent of an immunization to protect your ash tree, even if your neighbors do nothing. Your tree can be protected, so call to find out how .  …

Artistic Landscapes is a reasonably priced, professional landscape design and installation company serving the Twin Cities area. We love to work on renovation projects, turning a boring landscape into a beautiful landscape! We are an owner operated company with 5 employees, designing and installing beautiful landscape projects ranging from $3000.00 up to $200,000.00. We give attention to detail on all of our projects and install all of our projects ourselves! We are dedicated to quality work at a reasonable price that will stand the test of time.  …

The Lawnsmith is Extremely DISHONEST and overly greedy. TERRIBLE mowing and HORRIBLE Customer Service. I was charged on my charge card for a service that I never even ordered. Instead of apologizing, Dan Beutz (owner) argued with me about it when I called. The mowers have also caused LOTS of damage to my lawn and property I saw them hit my garage AND clothes line pole with their mower. I sent several letters, photos, and called Dan regarding my damaged siding and my damaged clothes line pole but Dan will not even respond or address the damage. Yet they keep on billing me. They are quick to take your money, but if you have a problem or issue, The Lawnsmith/Dan won't resolve the problem, are extremely rude, very disrespectful and don't even care when they damage your property! As a disabled Senior who has been treated terribly, I strongly advise others to choose another company.

One week the mower cut my lawn too short and it killed the grass, resulting in tan (scorched) stripes. In the back yard, the scorch marks were parallel lines. But in the front, the scorched grass was in LOOPS, which was an embarrassment. I contacted the owner and he asked for photos. I complied, then he argued that scorching (i.e., KILLING the grass) was “normal”, and refused to credit that week’s fee. I had taken the time to document everything in a long email, but his responses were brief and dismissive. Calling on the phone didnt help, either. I had set up autopay at the beginning of the season, so I decided to cancel that because I wanted to take back control of my payments. So I asked him to cancel the CC autopay and to resume sending (paper) invoices by surface mail instead. But he failed to comply with either request. He KEPT BILLING my credit card AUTOMATICALLY and emailing invoices that showed as auto-paid. I could not believe he had the nerve to KEEP my credit card number, OR to USE it against my written directive. This was completely UNETHICAL, but he did not care. I told him that I would report him to the MN Attorney General’s office, the BBB, and Angie’s List. But that did nothing. No response. So I had to take the time to write reports to all 3, and call my credit card bank to report his unauthorized charge. I still cannot believe he had the gall to do this. I had to wonder if it was because I was a single woman,and he thought I would just give up; wonder if he would have treated a man the same way. Either way, this was a GROSS MISUSE/ ABUSE of customer financial information, and I urge everyone to avoid this business at all costs. (Note re: photos: I tried to upload 4, but AngiesList would not accept more than 2.) (Note re: cost: $25+tax was just the weekly mowing charge.)

Dan and his team are top notch at snow removal. Services are performed in a very timely manner!

With the snow event in April they came out and plowed when I called and emailed them not to. I called and complained and the they sent me a bill for more money then the $30.00 + tax standard fee. they have broken my fence gate every year when doing the lawn mowing. I would never recommend them to anyone.

We serviced [Member Name Removed]'s property since 2009 and she has been a great customer to The Lawnsmith. [Member Name Removed] did call and send us an email to cancel her service for the April 14th-15th snow blizzard, but the call & email where made after all the snow routes had already been printed and the crews already out working. On the 16th of April we made a second visit to all our snow customers and by that time I had taken [Member Name Removed]'s property off our snow route. We do require a 30 day cancelation notice for our snow service, which in this case this did not happen. An invoice was sent to [Member Name Removed] for the service we did. This is the first that I have heard about our machines breaking her fence. I reviewed all notes on her mowing account from the past years and there nothing mentioned about us breaking a fence. Having a blizzard in April and having a great customer cancel our services is the last thing any company wants. I would hope [Member Name Removed] will consider coming back to The Lawnsmith. Thanks, Dan
5.0

They have been responsive and flexible.

We pay about $175 a month. They are really professional, punctual and the billing is great.

Description of Work
They do lawn mowing weekly at both of our homes.

About a month ago, I "ordered" weed pulling in my front borders, where I have a thistle problem due to contaminated mulch Lawnsmith provided previously. I was told two weeks ago that I was "top of the list" but nothing has happened. My weeds are now taking over and looking like small trees. I am now shopping for a more reliable company, but am stuck with my pre-paid lawn mowing till end of summer. Rate below is hourly for weed removal (in the past they have often used a power grass trimmer in lieu of actually pulling weeds.)

Description of Work
I have used them for yard and snow for several years, but they have become increasingly unresponsive and work quality is suffering. About a month ago, I "ordered" four hours weed pulling in my front borders, where I have a thistle problem due to contaminated mulch they provided previously. I was told two weeks ago that I was "top of the list" but nothing has happened. My weeds are now taking over and looking like small trees. I am now shopping for a more reliable company, but am stuck with my pre-paid lawn mowing till end of summer.

I would have to continually call them, "when are you coming, when are you coming?" And if they didn't get there before the snow fell, that was my bad luck. Wanted to look into resodding my yard and I wanted them to give me an estimate. I had to keep hounding them. So I just quit using them. Once the work was done, it was done well. I won't begrudge them that. The problem I had was with their front office. I would not use them again. The end product is pretty good, but the end product is a real pain. The workers I came into contact with were friendly, very nice. Usually two to four people came. They left my yard pretty clean.

Description of Work
I used them for Fall cleanup.

The price is excellent. I will absolutely continue to use them. They do incredible work.

Description of Work
They came and did part one of a two part yard clean up.

They promised to mow the area - they rarely do, They to not return phone calls. The have left (admittedly minor) 6-8? inch long grass clippings clippings on my lawn. They seem to be focused on getting by, not being professional.

Description of Work
The neighbors use them. I have had trouble getting them to mow a patch of the neighbors lawn between our properties - not paricularly visible to the neighbors but to me.