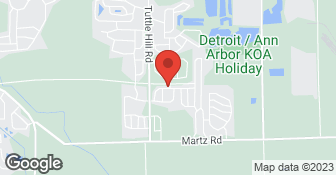 My focus is quality and delivery. I never cut corners, even when its more expensive. Some of my competitors are cheaper, but i will take the time and effort to make sure you're 100% satisfied with the work done. Covid 19 restrictions All employees will wear masks and gloves at all times inside the house. We encourage customers to stay 6 feet away at all times.  …

We are the preferred floor and surface care experts throughout the Oakland, Wayne and Washtenaw Counties area. We specialize in floor and fine surface care, including repairing and restoring natural stone and terrazzo, sanitizing, sealing tile and grout, as well as deep cleaning and protecting carpets, rugs, upholstery and Wood floors. We deliver the highest quality workmanship to every customer and look forward to serving you. Please contact us by phone to schedule an appointment.  …

We accept credit cards, checks or cash and offer the best carpet and furniture cleaning or your money back! 2014 Super Service Award Winner!  …

The whole job went smoothly and rather quickly especially considering the extra attention to the areas with spots.

Description of Work
Carpets cleaned throughout the house. They arrived on time and did a good job. Listened to my areas of concern and paid special attention to cleaning those areas. Were able to get some stains out that I thought might be permanent. Overall a good experience and I would definitely use them again. They cleaned a large living room, TV room, hallway, bedroom, set of stairs and 6 area rugs.

I call them every year to clean my one carpet that I have.

Description of Work
I used them for carpet and furniture cleaning.

My 93 year old mother had died and we were having people over after the memorial services. Her carpets were horrible. I wish I had taken before and after pictures! It was remarkable. Fast service, nice people. Carpet dried same day. No one could believe it was the same carpet.

Everything came out clean. Amazing job on basement carpet.

I have used Maize and Blue three times now and they have always provided prompt, quality service. They have helped remove some very difficult pet stains and leave my carpets fresh and nearly dry.

Outstanding cleaning and quick drying after completion of work. Arrived on time and completed within the timeframe quoted. I was completely impressed and will use them when we need cleaning again.

They provided a quote over the phone after I reminded them that they had done our carpets a couple of years earlier. They gave me the five room advertised price. The two servicemen arrived about 1 hour earlier than expected, although I may have misheard that the expected arrival time was within a two hour time period.. Unlike the last time, they did not use corner protectors to minimize any damage from the hose as they traversed the various rooms. I did not see any damage because of this as they were careful as they maneuvered around the house, They spot sprayed stained and heavily soiled areas prior to the cleaning. They put Styrofoam blocks under large pieces of furniture (couch and chairs). It took them about an hour to do the entire house. Fans were used in the living and family room to provide some minimal drying. The cleaners seemed to do a good job of extracting moisture so the carpeting was damp but not wet when they left. The workers were very courteous and professional. I was charged for six areas (correctly) but I'm not sure why they could not have determined that from my prior experience when giving me the quote over the phone. They did tell me that it would be 6 areas before they started the job. Overall, it was a satisfying experience and the carpet looks very good.

Description of Work
They steam cleaned 6 areas of carpeting including two bedrooms, a hallway, a living room, 12 stair steps, and a family room. They moved some furniture (couch and three large chairs during the process. They also provided some drying via a floor fan for about 10 minutes in a coupe of areas.

He arrived on time and did an excellent job. He pointed out a couple of spots that wouldn't budge and worked on them. All other spots came out. He put all furniture back and cupped the legs, and raked all carpet so that it would dry more quickly. He was hard-working and efficient. I have no complaints. It was a good job done well.

They did a good job. They were professional.

It went well. They used corner protectors to avoid damaging the walls with their hoses. Spot treatments were used on highly soiled areas and they vacuumed before doing the cleaning. The moisture left in the carpet was minimal. We paid extra for some fan drying but they only used them while they were here. It was not worth the extra cost. We did call them back to redo a couple of spots. They were there the next day after the call and were again very professional and courteous. The carpet looks like new again.

Description of Work
We had our entire carpet cleaned (about 1200 sq. ft.). It had been four years since we had purchased it and it was looking pretty bad in the high traffic areas including the stairway used daily when entering and leaving the house. We also have pets.