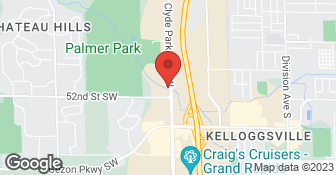 "We exist to help you love your home. We provide Home Improvement and Remodeling services in the Greater Grand Rapids area. Inside your home, we remodel kitchens and bathrooms, and perform whole-house remodeling and addition services. For exteriors, we install siding (Vinyl, Hardie, etc.), roofing, and decks. We love using our skills to help those in need, so we help restore homes after a fire, and work with those with disabilities or aging difficulties live safe and functional at home. Remodeling and Home Improvement from your roof to your foundation. Most homeowners don't look forward to hiring a contractor. We have a process that addresses our client's fears so they can enjoy their home improvement.

Description of Work
Basement remodel and kitchen remodel; only end up doing the basement remodel. Priced out huge addition to home.

I would recommend Amber Valley Construction as they were extremely helpful in my product research. They took the time talk about my ideas, gave me some referrals, and guide me through what I was thinking. The staff was responsive and professional. I will call them in the future if I need anything else.

Had them come out to look at the site for the deck. I contacted them with the info they requested. They emailed me plans and then I never heard from the again. Tried to contact them several times with no response. Had them out early spring by the time I started looking again everyone was filled up. Very frustrated.

I contacted this company last fall for a deck build. I was ready to hire the builder and asked for licensing and insurance information. After I asked for this information, crickets. I heard nothing from the builder. I assumed that it was because it was so far into the fall months that he felt it was best to wait until the spring. I called back in the spring and the builder gave promises of a call back, not once, but twice. I never heard anything from him after that. No explanation, no call backs, and no proof of insurance.

Description of Work
Gave an estimate on a deck.

Derek is great to work with, very prompt, and cost efficient. He is very professional and attentive to all of our repair needs.

Professional exterior cleaners. We get green and spider webs off of siding. Also, we clean gutters as well as flat surfaces such as driveways and sidewalks.  …

SPECIALIZING IN DRYWALL INSTALLATION & PATCHWORK - CALL OR CLICK FOR A FREE QUOTE TODAY!  …

Amber Valley Construction is currently rated 3.2 overall out of 5.

No, Amber Valley Construction does not offer eco-friendly accreditations.

No, Amber Valley Construction does not offer a senior discount.