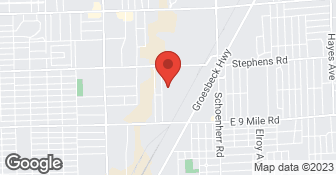 We have an ongoing relationship. He's going to be our permanent landscaping and lawn care person.

We were looking to have some updates made to our landscape. Scheduled an appointment with Dan for 5/13/16 to come out and review but he never showed and never called to reschedule or to let me know he wouldn't make it.

Description of Work
Provider did not show up

Was not working at first, but after numerous additional applications, it worked. (with some help on my part)

Description of Work
Got rid of weeds in back yard

Description of Work
Do not service Detroit

We hired Berns Landscaping for a major project at our home. The project started in 2011 and took over a year and a half to complete. Berns had total control of the project including lawn maintenance and irrigation, in addition to landscaping. The total cost was well over $30,000. The project manager did not plan or execute the project well. She did not know the local codes of our city causing major delays in the project. Now over two years later, Berns still will not take responsibility for poor products and poor work. They planted many trees some of which died twice. We learned from an arborist they were not harvested correctly so they were doomed to die. Half our trees that died, they blamed on watering which they were responsible for. They destroyed our lawn in the back and did not repair it. Jim the owner, is hands off and non-responsive. They do not stand by their work. It is all about the sale, not taking ownership of their work. I would caution anyone looking for landscaping services to stay clear of this company. I could go on an on, the list is endless. So if you need more information, please feel free to contact me: Susan Hendrix sh4845@gmail.com Just an update as of August 1, 2014 This review was removed from Yelp, Berns obviously had something to do with this. I am reposting because the truth needs to be public knowledge. Jim Berns replied to my post, and quot;just have your husband contact me and we can work something outand quot;. Well, my husband has called him many times and he always has excuses for why they won't stand by their work. The tree they planted last fall is dead and the owner Jim says and quot;it's out of warrantyand quot; even though the warranty is supposed to be for one year. We have text messages from him with a picture of the tree last October. Owen Tree service says the trees Berns planted were harvested incorrectly, cutting the large roots and that is why they died, but Jim Berns says and quot;they are out of warrantyand quot;. If they were harvested incorrectly, that has nothing to do with a warranty. Our neighbor who also used Berns, will not have anything to do with them because of poor customer service. This posting needs to stay online so that others are not and quot;BERNEDand quot; by this company.

Description of Work
Re-landscaped the front and part of the back our home. Planted trees, plants, built a rock wall and redid irrigation.

It seemed like the work was good. I feel like I there was trouble getting them to respond initially. There was an over sight in getting started on my work, but the result looks pretty good. I thought the price seemed a little high. When the workers got here it seemed like they knew what they were doing and I liked their work.

Description of Work
We hired them for an on going service that included weeding, fertilizing, and aeration.

Update, April, 2014: I have upgraded my grade for Berns to a C, from a D. This, after finally receiving my soil test results many months after I paid. The upgrade is because the test results were comprehensive, easily understandable, and with recommendations that I am now carrying out on my own. I would still not recommend them -- nor am I using them this summer --- due to the issues related below. Hugh Our lawn had not been fertilized or had any chemical applications for 10 years, but it suffered from an aggressive weed problem created a couple years back by a dirty load of topsoil. We took great care in finding a lawn care company that uses natural (not synthetic, petroleum-based) fertilizer and who would use only the minimal amount of herbicide. The initial visit from a Berns professional was prompt, efficient, informative and thorough. We decided on a 4-time application of fertilizer and a single, pre-emergent application of herbicide to knock back the weeds before they got a foothold in the spring. Per her recommendation, we ordered a soil test which she said was necessary to apply the proper types of fertilizer. The price seemed reasonable, and we were pleased. Their products seem terrific. Our weeds indeed were significantly impacted by their application, and the fertilization seems to have really done its job. However, the Berns customer service, communication, and timelineness has been atrocious, for the following reasons: --- After we signed and faxed the contract, no word for several weeks. When I called, they couldn’t find the contract. When they finally did, they said yes, they were on top of it and they should be out in a day or two. --- More than a week passed and I called again. They said we were on the schedule. By now, it seemed to me too late for a pre-emergent but they assured me it wasn’t. Research I did later seemed to indicate that it was indeed too late to be effective, as we were already well into a second generation of dandelions. --- Several days later, an applicator showed up and treated our lawn – letting himself into a latched/gated backyard without knocking on the door (my wife was home) or announcing his presence – a move which might have been hazardous to his health had our dogs not been inside! The paperwork showed he fertilized, applied the pre-emergent, and also treated with an additional weed killer which we neither authorized nor desired. I suspect the weedkiller may have been a makeup for the late pre-emergent. --- I filled out a Berns website feedback form, politely expressing our concerns with both the unwanted weed killer and the failure of the worker to contact the homeowner before entering the gated back yard. I also asked for a copy of the soil test, which they had said I would receive a copy of. I never received any reply or acknowledgment of that inquiry. --- A couple weeks later, I called, asking to to obtain a copy of the soil test. Was told Melissa would call me back. She didn’t. A week later I left a voice mail, asking again for the soil test results. No response. I do not know whether they failed to test (it’s paid for!) or just can’t get their act together to provide it to me. In sum, the products seem to work great. The weeds are at bay, and the grass grew like gangbusters all summer. But I am disheartened by the multiple failures in other areas as noted above, and will likely seek a new contractor next year who is both earth-friendly AND customer-friendly. ###

Having a business and residence in Warren, I wanted to give the jobs back to my area. I contacted Bern's first. They seemed hard to schedule, but I took it as a good thing, meaning they are busy. They came out to measure each area back in early May. Since my last contact with them in early June, I'm still waiting for an e-mail with drawings and price estimate that they said they would do. I'm disappointed and confused about this. Would rather have them tell me they are too busy this season to get to my job.

Description of Work
I called in early May for estimate at my home for new patio brick, retaining wall with landscaping in front and some work on side of house. Bern's came out and measured all areas. That was the last thing done.

The year we skipped hiring them, the lawn looked very sad by Fall. Now they are back and it is green again.

Description of Work
They fertilize, treat for thatch, treat for weeds and pests. We have hired them for the summer lawn care for several years. They charge about $50 per visit. They also removed two dead bushes and roots for about $150.

Their services are very good.

Description of Work
I have been using them for nineteen years. They maintanin my lawn, fertilize my lawn, and do some landscaping work.

Description of Work
The website is great and they did follow up with phonecalls right away. However, every encounter with them seemed more about when they could possibly fit me in to their schedule. They really had very little interest in what would work with me. They left messages for me to call them back when it was convenient for THEM but I had left messages remininding them that I am a full time working single mom and am never available while I'm teaching and if they could not talk to me after 4 then it wouldn't work out....after 3 such messages they called me when I asked. They didn't coume out for 2 weeks then I never got a written estimate. I had a phone call a week later telling me that it would be really expensive and the kind of job they really didn't like to do since it involved tree stump grinding etc. I thought they were expensive and really didn't care about a smaller property like mine.

They do top of the line work and have a large variety of services. They did an excellent job with a personalized touch.

Description of Work
Berns Landscaping did a lot of work in my yard getting it ready for winter. They sprayed and deep routed my trees and put down new sod. They also fertilized and treated my lawn.

We have been in business since 1994. During this time, we have installed hundreds of brick paver and natural stone landscapes throughout Southeastern Michigan. We carry Commercial Liability, Commercial Vehicle and Worker's Compensation Insurance. Take a look at our website to see our portfolio. Austin Brick Pavers LLC is dedicated to our community. We only employ local workers because we believe in keeping jobs local and we also believe in paying a decent wage for an honest day's work. Our employees are courteous and knowledgeable and always appear in Austin Brick Pavers LLC uniforms on the job site. As an owner of the business, I work hand in hand with my employees on the job site, utilizing my 19 years of brick paving experience and also my knowledge of architecture. I hold a degree in Architecture from Lawrence Technological University. We are a Unilock Authorized Contractor. We take pride in community outreach like sponsoring our local T-ball teams and the Adopt-a-Highway program.  …

We have over 26 years of experience in lawn care and 20 years experience in fertilizing to help you maintain a beautiful and healthy lawn. Locally owned and operated, most jobs are owner supervised to ensure complete customer satisfaction. Serving Macomb Co., Grosse Pointe, and Harper Woods. Please call to schedule.  …

Berns Landscaping Services Inc is currently rated 3.9 overall out of 5.

No, Berns Landscaping Services Inc does not offer eco-friendly accreditations.