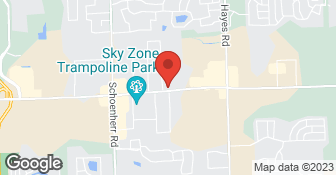 Choosing the right contractor for your Stamped Concrete, Concrete Patio, Driveway, Walkway or flatwork cement home improvement project doesn't have to be a time consuming or nerve racking process. Come see our showroom in Shelby township and let us help you build the patio of your dreams. Biondo Cement is also your local concrete driveway contractor specializing in NEW Driveway installation or replacement. We take out old concrete and replace it with reinforced concrete so you get the very best product. We can also install lights into your patio, driveway or walkway to make it even more outstanding! Check out our concrete colors & patterns samples and get inspired. Locally owned & operated....

This is the 3rd time using this great company we used them in the past for our Patio and our pool. We had our Driveway replaced by Biondo Cement and what a wonderful, easy going and fast process the whole experience was from start to finish. They completely finished the entire job in just 2 days and we are very happy. Would highly recommend this great compnay to all my family and friends.

[Member Name Removed]- Thank you for your review.
5.0

This is the 2nd time we have had Biondo Cement work done at our home and we couldn't be happier with the way our driveway has turned out, it looks absolutely beautiful. From start to finish working with this team of guys has been nothing but professional, easy-going and they are very hardworking and get the job done. Would highly recommend this company if you have a cement job you are looking to have done. Biondo Cement is the best company out there by all means and easy to work with.

Description of Work
Replaced our driveway

[Member Name Removed]- Thank you for your review.
2.0

The work was done on time and looked good. Shortly after, it cracked. They came out and filled the cracks with caulk. There are now multiple cracks in many places. Even though it is still within their warranty period, they refuse to come out. Their response was, “ This is Michigan, concrete cracks.”

If you are looking to have any type of cement work done look no further! Biondo Cement is the BEST IN TOWN! Biondo Cement installed a stamped concrete patio in my yard in Shelby Township, MI. I could not be happier with the job. Starting from day 1 when the owner John came out to quote my job to the day the men came to do the job. EVERYONE was pleasant to work with and the crew did a Marvelous job! You can tell that John has very dedicated workers because it shows in every detail of the completed patio. I could not be happier with my decision to use Biondo Cement. I will recommend them to all of my family and friends!

Biondo Cement is a Fantastic and easy company to work with. They installed a stamped concrete patio and walk way for us and we could not be happier with they way it all turned out, they did a great job and everyone was really easy to work with starting from the sales men to the crew, they are all very dedicated to the work they do and it shows in every detail of the completed patio. The patio is absolutely beautiful the quality is top notch and they provided outstanding service and workmanship, we couldn't be happier with our decision to use Biondo Cement. I would highly recommend Biondo Cement to all my family and friends!

We love it! John pays great attention to detail.

"It was a pleasure doing business with you in every respect. You and your team did a most outstanding job, and the result is a finished and beautiful look for our property. It was refreshing to have the advantage of your experience, integrity, hard work and humor as we watched our home transform. We found our professional in you and look forward to working with you again." Rich and Davina

Our neighbor and ourselves were looking to get stamped concrete patios at the same time. Biondo was the only company to respond to us out of 5 other companies, so we chose to go with them. A Biondo sales representative came out, measured our backyard, and quoted us accordingly to what we wanted. After our quotation we went to the Biondo design center and had our design made and to also choose our colors. We were very happy with the initial services provided. Before we left the design center, we even asked John Biondo himself what he thought of our design and he agreed it looked great and it was doable. We also have an egress window in the back yard and he said it would be no problem to take the patio around the egress window and make it level. Everything seemed to be good. Day of the pour I get a phone call saying that I need to pay extra to have the patio taken around the egress window and to make the patio level with the window. This frustrated me because it was agreed upon that this was possible to do for the quoted price when we had our design done. Although we were frustrated at this, we proceeded with the addition because they had already began the work. (NOTE: I was traveling for work, my wife was home during the construction). After the concrete had been laid, I received a picture from my wife and the first thing I noticed is that the patio design was incorrect. It looked exactly like the design our neighbors had chosen. When I called John asking about this, he kept dodging a response to my question, and these were his responses... - Kept saying he did me a favor for doing the work on the egress window and he did it for me and won't do it again, trying to make it seem like he was a hero for doing this and I should forget about the mistake that was made on his end. - Stated that sometimes changes need to be made on the fly and I wouldn't have been happy with our chosen design. Why wasn't this discussed with my wife before the decision to make the change to the design was made? - Stated it was my fault I was on a business trip and that I should have been there to oversee the work. I kept stating that these reasons are not valid reasons as to why the design was changed without the approval of my wife (who was home) and he kept returning to those same statements. Weather the design was changed on the fly or a mistake was made and our neighbors design was used for ours, they had our design on hand to go by and we did not receive this design. We are paying this company a lot of money for their expertise and professionalism and to provide us with the design we wanted. And for some reason if it cannot be done, we needed to know about it. We were not notified of this and when confronted we were given unprofessional responses and reasons as to why we did not get what we wanted. Although the quality of the final product turned out very good, the professionalism and business ethics of this company are poor. Our neighbors also had poor encounters with John and the secretary towards the end of their construction. They will be writing a poor review as well. The only reason why we did not rate this company an F is because the quality of the final product was very good and although the design is not what we wanted, we can still use the patio and it does look nice. We will not do business with or recommend Biondo Cement ever again.

Description of Work
Stamped concrete patio in the backyard.

Job was originally slated for end of May, early June. Called me on Saturday, April 15 and asked if they could do the job on Tuesday, April 18. Crew of 15 plus owner John Biondo came out and had the job poured in one day. Next day, crew of two power washed and saw cut. Friday had two more crew members staining and sealing. Driving on it a week later. Looks great. Very professional. Highly recommend. Price did seem high, but other bids were close. We did pay a little more to have a local company with a local office do the work. At least that way, if I have any issues, I have someone to visit instead of trying to track down someone on the phone.

The owner (John) came out to my house and was over 2 hours late for an estimate. He provided a quote, and based on what appeared to be a reasonable price, I scheduled my job. Then about a week before the work was scheduled to occur, John called me and told me my job was too small, and he was not going to do the work. He was unapologetic, rude and totally disrespectful. This ended up causing me a 6 week delay before I can get another company to do the work. I would not trust John or Biondo Cement - they are bad business people, and have no ethics.

Description of Work
The owner (John) came out to my house and was over 2 hours late for an estimate. He provided a quote, and based on what appeared to be a reasonable price, I scheduled my job. Then about a week before the work was scheduled to occur, John called me and told me my job was too small, and he was not going to do the work. He was unapologetic, rude and totally disrespectful. This ended up causing me a 6 week delay before I can get another company to do the work. I would not trust John or Biondo Cement - they are bad business people, and have no ethics.

Family owned business since 2007. Creekstone Building creates personal relationships with customers to feel educated and comfortable about the process of there project.. we have over 30 years of experience in the industry We are licensed and insured . We provide a 3 year warranty on all of our work.  …

We offer an end-to-end client experience that includes seamless communication, budgeting, staffing, on-site organization, and solid, quality handiwork every time. That's why Integrity is your go to source for Stamped Concrete, Masonry, Brick Paving and Home Construction Services in Macomb County, Michigan We have been serving Macomb and Oakland Counties for 20 years.. It's my passion to offer you our construction services.  …

We appreciate your interest in becoming familiar with our friendly, professional services for all your landscaping needs. Serving Michigan residential and commercial landscaping needs since 1980. See videos of our work at https://www.designoneinc.com/new-design-one-service-highlight-video/  …

Biondo Cement Co Inc is currently rated 4.2 overall out of 5.

No, Biondo Cement Co Inc does not offer eco-friendly accreditations.

No, Biondo Cement Co Inc does not offer a senior discount.