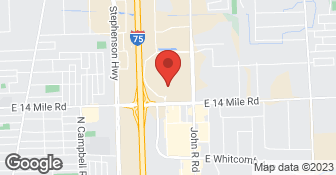 Rock Solid Exteriors provides high quality roofing, siding and all of your exterior needs for homes and businesses. We offer emergency roofing and siding services throughout Michigan and can provide services within 24 hours. We are preferred Owens Corning Contractors. We are Mastic Preferred Contractors. We are certified in Certainteed Special Training Program. Fully licensed and insured roofers in the state of Michigan. Financing is available.  …

Vinyl Sash is a full-service home improvement business. Family owned and operated for over 85 years. Vinyl Sash has manufactured vinyl windows and patio doors since 1970. In addition to custom vinyl windows, Vinyl Sash builds custom 3 season and 4 season sunrooms for your home and patio. While windows and sunrooms make up more than half of Vinyl Sash’s business, bath tub and shower renovations are growing faster than the average. Vinyl Sash installs Mastic vinyl siding, Certainteed shingles and Genovations vinyl decking to round out the line up. Give Vinyl Sash a call or an email to check out our monthly specials.  …

Installation seemed to go ok. Interior trim not done very well. One window with a curved window over rectangle window - installers pulled nice original trim with just aluminum strips cut to cover the curved part. The window now leaks everytime it rains and I have called them several times to repair their work. I have even had sales folks come by to try to get me to buy windows for the rear of the house. I said that if they had someone from their maint. crew fix the problem on this one window. After many calls with no call backs I have given up. I would not recommend these window, primarily because the installers and after installation are not qualified and do a lousy job.

We are replacing one section of windows at a time in our home. We bought Majic Windows, twice, on two separate occasions. The experiences I have had differ from each time. However, I will say that now we are looking at replacing third section of the home, we will not hire Majic this time. First, the windows that have been replaced are incredibly difficult to move up and down. We have single hung windows and they are a bear to move. They make an awful noise each time we do move them. Second, one was warped and could not close. It took about four months for that one to be replaced. Third, and this is the big one, I felt really pressured and swindled during the whole process. Yes, I have buyer's remorse and I won't put myself through that again. There were two different installation crews for the two different dates. The first one did some damage to the walls around the windows and took all the wood trim out around the window, replaced it with new wood trim that did not match the house, and let it unfinished. The second time around, the installer only removed the top piece of trim, making less work for us, and was much better at it. It looks like there was nothing changed and I had no patching, filling, or painting to do. Windows are expensive, I understand that, but I didn't like the tactics these people use. Further, they lacked the professionalism that I think that I deserve.

Description of Work
Replaced the windows on the north side of our house. Twelve windows thus far.

Description of Work
The salesman was exceptionally rude and insulting. It is hard to imagine how they could get anyone to purchase their windows based on the sales presentation. Do not invite this company into your home.

Salesman talked down to us almost to the point of being degrading. Dropped the price by almost 50% trying to "buy" our business. As soon as he realized I was not committing funds until I had other estimates, the conversation ended.

I called a month ago to get a quote for windows. AFTER READING BAD REVIEWS ON ANGIES LIST,YELP AND THE BBB so i decided to cancel. weeks later i get phone calls asking when i want to reschedule. they called again today 2-12-15 and i said i already hired someone!!!

My husband called to set up an appointment for a quote and they refused the appointment because he can't "guarantee" that both of us will be home. My husband works 50-60 hours a week and travels out of town 40 weeks a year. We have 2 preschoolers and I also have a very demanding job. They are lucky to get one of us home while the kids are at school.

Description of Work
refused to give us an estimate appointment

Majic was very prompt and did give a conformation call the day before our appt. A salesman came to our house and he seemed very nice, until he gave us the estimate and realized we weren't buying his services right away. When I explained we have one more estimate coming and we would need to see if we could fit $27,500 into our budget, and he said "well if I could get it down to a little over "at cost" around 14000-16000 would you say yes?" during this whole time of him trying to get us to say yes, and finance through them he was stating "no pressure!". He also said other companies are vinyl windows, no one else has fiberglass( I found plenty of them that do!). As his attitude kept getting worse my husband and I said "we have to think about it and see which way is better to go for us, I asked when we decide do we call you directly?" He stated" yes, but what does that matter, your not going to call!" I was actually 95% sure I was going to go with their product and services, until that comment! All I needed was time to go over finances and see if going through equity on our home or getting financed would be better. He lost at least $14000 because of a bad comment. I don't understand why a comment like that was necessary.

Description of Work
Majic had came to my home to give an estimate on 11 windows and a doorwall.

They showed up on my door asking to setup an appointment... usually I don't like solicitations, but agreed. I called and verified my appointment later that week. Majic window never showed up during the appointment time, when I called the main office 30 minutes after the time and asked if they were coming and requested to cancel, they didn't even offer to reschedule. Just said all set and hung up. Really wouldn't want to do business with them if they don't even have good customer service on the sales side. My recommendation: Don't waste your time even trying to get a quote from them.

I must have had the same salesperson as the other reviewer(s). He was aggressive from the moment he walked in the door. We wanted doorwalls and he wanted to talk windows and said he wouldn't get to doorwalls until we heard his pitch for windows. We ended the conversation and he left after about 10 minutes at our house. We could not believe how rude he was until we read other reviews on Angie's List, Yelp, etc. I can't believe this company ever gets any customers.

Description of Work
He didn't get a chance to do anything because he was overbearing and rude.

Just had someone in for an estimate. When he realized I was getting quotes and just wanted a price he walked out without saying a word. He also told me he was the only one I could buy fiberglass windows from (not true) I am assuming they don't like to deal with savvy consumers. This guy was very unprofessional and rude.