Masonry
Chimney Repair
Fireplaces
Concrete Pouring and Repair
Concrete Driveways
Decks and Porches
Glass Block
Pavers and Hardscaping
Roofing
Licensing
Bonded
Insured
All statements concerning insurance, licenses, and bonds are informational only, and are self-reported. Since insurance, licenses and bonds can expire and can be cancelled, homeowners should always check such information for themselves. To find more licensing information for your state, visit our Find Licensing Requirements page.
Business Details 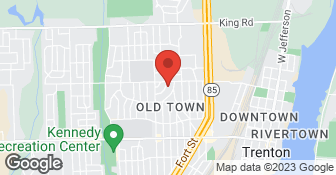 From chimney cleaning to a new roof, we can help improve the look and value of your home or business. We have over 25 years experience adn we are fully insured and licensed. Above All Masonry & Construction, LLC is dedicated to home beautification and restoration for both Residential and Commercial properties. Protecting our clients' investment with durable, guranteed products, increasing home values and our professional, courteous employees are all sources of pride. We treat every project like its our own home. We are a member of the Better Business Bureau and the Detroit and Downriver Business Association.

Gary repaired the two brick buttresses that had pulled away from the main front porch by using a mortar formulated with latex to expand and contract to allow for changes in climate conditions. The structural wing on the left side of my home was deconstructed and rebuilt after Gary poured a foundation footing below the frost line to prevent another occurrence of fracturing through ice forming benea...

DESCRIPTION OF WORK
I had Gary come to my home early September 2013 . He was very prompt and asked a lot of questions about the work I wanted him to perform. I had brick work at tuck pointing that needed to be addressed.  My brick 2 story home was built in 1926 and in relatively good shape except for some issues with the face brick caused by the settling and the age of the home. The front left side of my home’s porch had the face brick pulling away from the cinder blocks, the house needed the brick tuck pointed in front of my home beneath a built in mail box, and the two side porch buttresses were pulling away from the porch slab and parts of one of the them was fractured. The left side of my home has an ornate wing that was fractured because it did not have a foundation properly supporting it . Ice build up beneath the brick raised the structure upward and caused the mortar and brick to separate. The rear of my home had to have the brick tuck pointed because my home was settling and stress cracks in the mortar of the bricks was either crumbling or separating. Gary was very inquisitive about the age of the home , he expressed an appreciation for the workmanship of the brick work that incorporated the use of “Clinkers” the enhanced the appearance of the home. He had mentioned that he would make sure that the color of the mortar repairs would be color tinted to match the existing mortar. I hadn’t thought of that and he offered suggestions on how to solve the problem I had with three or four bricks that had pressure cracks .He resolved it by chiseling out the cracks and filled the opening with the repair mortar.

Gary called before he came for the initial estimate and again on the day before the work was to be performed. He arrived on time and did an excellent job in repairing my chimney. He seems to be very knowledgeable about masonry and I plan on using him again for future projects.

DESCRIPTION OF WORK
Removed and repaired damaged brick and mortar from my chimney.

Great! Contractor was honest, timely , and professional with high quality workmanship! We are very pleased.

This is why I did not renew my membership.  While a member, I looked into 5-6 offers, and every single time, the provider refused to come to where the job was at.  We have a homes in Brighton and Ann Arbor. Also--this form is poor!  There IS no date when the service was never performed.

DESCRIPTION OF WORK
I needed a front stoop and steps rebuilt.  They refused to come to do my job in Ann Arbor.

The initial estimate didn't include a lot of issues. There was therefore a second quote and a large price increase. Unfortunately, they still missed details that they had noted they would fix.