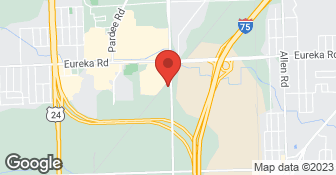 With 35 years experience Joe's Carpet Service strives for customer satisfaction, believing that "word of mouth", is the greatest form of advertising! Our employees are honest, friendly and dependable. You can take comfort in knowing you are getting the best price without sacrificing quality and workmanship. Joe's Carpet Service stands by what we do, so we know you'll be happy with our service....

Amazing Floors is a locally owned and operated Flooring Company offering Hardwood, Laminate, Vinyl, and Tile flooring. We deliver an amazing experience from start to finish for every flooring job. Visit our showroom today to explore our diverse selection of flooring products.  …

The Carpet Guys are the flooring and carpet experts of southeast Michigan, servicing all of metro Detroit including Oakland, Wayne, and Macomb counties respectively.  …

Thanks for the positive feedback!
3.0

I'll admit I needed a few days to ponder the review for my experience. I'll do my best to be fair in my explanation. The floor in our kitchen was the last home reno project of years of redoing my whole house. I choose to go with a "budget/warehouse" place because I was tearing everything out and just needed a simple install. In hindsight, I regret that decision. They were initially fairly flexible scheduling the install around a long list of things I had to renovate and complete. I had a lot of moving parts around this work, including moving all the appliances out of my kitchen, tearing up the old floor, scheduling carpet cleaning, getting a dishwasher delivered etc. I even called and had a 2nd installer come out before the install date to do double check after I ripped the flooring out that nothing unexpected would affect the agreed upon job. Things started to go south when I got a call the day before the install and informed me they could not do the floor all in one day. Wouldn't have been a problem, but the install day was Dec 23rd which meant I had to leave my entire kitchen worth of furniture in my living room, as well as walking on a mastic subfloor for 4 days over the holidays. What a nightmare way to spend the holidays. The installers got to my house at 11am, despite being promised they would start bright and early so they could do as much as possible. They worked from 11 until 2:30. They then said they had to leave for supplies and would be right back. 4:45 rolls around and I call the office wondering where they are. They show up at about 5:00 with about 20 square feet of flowing and work until about 6:30. When they leave, one guy says they think they will be back Monday to finish. No attempt at being confident on that date or even a time. To be fair, a nice lady called on the weekend to check on my satisfaction. She listened patiently and said she would speak to someone about my experience. I never heard a word back nor did the following install improve. So, Monday rolls around and again the guys show up at 11am. They worked until about 2:30 again and disappear back to the store to cut the vinyl, again not returning until at least 4:30. This time they worked until 8:30 PM. I missed dinner that night with my sister from out of town an friend from out of state because they ran so late. We had to put my 4 month old to sleep in the basement. I have had literally every contractor under the sun over at some point in my home ownership but none stayed until 8:30. To be fair, the guys worked fairly steadily the whole time they were here. I did have one of our cats get out though. Most contractors I experienced have enough knowledge to ask and handle pets. When the job was done, the flooring itself looked alright. I cannot complain yet about the seams, closeness to molding, flatness etc. Unfortunately, I have at least 4 hours of repair work to my kitchen walls and molding, all of which were just painted the week before. I have to fix gouges, scrapes, glue, and mud from just about every wall and molding in the kitchen. When all was said and done, I called the next day to pay my balance. Not a hint of an apology or discount. The gentlemen on the phone says, and I quote "If you want to come back to us again we'll hook you up next time". These guys are nuts and probably have such a low profit margin they figured screwing a customer for the future was more valuable than being amicable. My parents live blocks away in a nearby identically designed home, and just had a linoleum floor put in themselves from much more reputable company. They had a very expensive product put down, and none of their immaculate and very expensive oak molding or cabinets were blemished. Lessons learned: 1. If you have a "warehouse" budget, expect "warehouse" quality work and customer service. 2. NEVER pay for a service or product that is sub-contracted 3. Get job dates confirmation in writing. 4. Never pay for an unsatisfactory job. I was so aggravated with the whole process I just wanted it over with.

They were excellent! They showed up on time and made the entire process smooth.

Their prices were really incredibly good. They were helpful and responsive. Their place was a little out of the way but if you are looking for a good deal especially on something that they have in stock, you will get a really good price. And they have a lot of in stock carpets just like in a warehouse. We asked for a really super special carpet and they had a really nice carpet. I think that it was probably the nicest carpet that I saw.

Description of Work
We used Joe's Carpet Service to get a carpet.

Great customer service, prices, and cleaned up and moved some items.

The salesman was very courteous and knowledgable. The owner was great to deal with, and bent over backwards to please us. The installation was done on time and the workers were very professional paying special attention not to do any damage to any of my newly painted walls. The installation took a little longer than expected due to issues of the house, but the wokers did a great job. They cleaned up well.and when they were done, the job looked fantastic. I was very pleased with the whole experience. They worked extremely well with our budget and didn't pressure us with trying to pruchase something we couldn't afford. They treated our job as if we had spent a million dollars. I woulddefinitely call them again. Just great all the way around.

Description of Work
The salesman was very courteous and knowledgable. He took down dementions of the house and caculated an estamate of amount and cost of carpeting. He helped us pick out within our budget what we needed. He came to the house and measured and readjusted the cost and amount of carpet we needed,to complete the job. He gave us options and cost options of either they would remove the old carpet or benifit if we did the work, and what it would cost if they did the job. They installed a whole house worth of carpeting which was a very large upper bedroom, 2 staircases, two landings and a hallway, and an additonal bedroom. This also included the padding. They showed up on time, installed the carpet and cleaned up very well. Great job. The job was comlpeted at a little house we purchased for our children and they were very please also with the work performed.