Chimney Repair
Masonry
Chimney Caps
Roofing
Chimney Sweep
Gutters
Decks and Porches
Fireplaces
Concrete Pouring and Repair
Siding
Licensing
Bonded
Insured
All statements concerning insurance, licenses, and bonds are informational only, and are self-reported. Since insurance, licenses and bonds can expire and can be cancelled, homeowners should always check such information for themselves. To find more licensing information for your state, visit our Find Licensing Requirements page.
Business Details 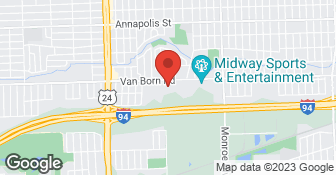 Best Chimney & Roofing Co. is a family owned business, governed by old-fashioned values, quality and manners. We have been in business since 1963. We believe in quality workmanship, and treating our customers with respect and integrity, which have been lost in the business world today. We feel it is important to give our customers 100%. We will ALWAYS take time out to explain what is happening in the restoration process of your chimney. Keep in mind, the nice thing about dealing with a family owned business is that we take the time and care about your family like our own. ...

From chimney cleaning to a new roof, we can help improve the look and value of your home or business. We have over 25 years experience adn we are fully insured and licensed. Above All Masonry & Construction, LLC is dedicated to home beautification and restoration for both Residential and Commercial properties. Protecting our clients' investment with durable, guranteed products, increasing home values and our professional, courteous employees are all sources of pride. We treat every project like its our own home. We are a member of the Better Business Bureau and the Detroit and Downriver Business Association.

Here at Big Ike’s Roofing Co, we sustain our business on quality and integrity. With over 30 years of experience we are experts in the Roofing Installation & Re-Roof trade. We are committed to quality from the beginning to the end of your project. We are fully licensed and insured and meet all state and city codes and requirements and are proud, dedicated members with the Better Business Bureau, Chamber of Commerce and the State of Michigan. Our estimates are FREE and our experience is Priceless! We look forward to earning your business. Covid-19 update: We are taking all measures to be able to continue to safely service you.

They were out within hours after we called. Not one but two squirrels fell into my Mom's chimney within a week because the screen was old and tore. Was fixed quickly - would call them again!

DESCRIPTION OF WORK
new cap with screen for chimney

Replaced Cap with high quality metal product that is far superior to the original builder quality one that was originally installed by unscrupulous homebuilder. Replaced warped would around chimney and stopped the leak that was going to my living room ceiling.

Not very good workmanship.  Picked bricks that did not match and talked me into believing the selection was the best match.  I later discovered this wasn't true.

Charles the salesman was fast and quick and professional. When I called the office to set up a time it took a while for the permit to be past and it's took a lot longer than they told me that it would be for them to start. But considering how busy it is the season it's easy to see that everyone is busy. The only real issue I had was I had to get in the habit of calling their office to remind them ...