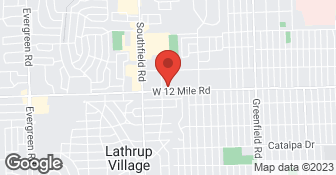 I gave them $990 on May 5th. I have not heard from them since. Called them on June 2nd. When I called them today he told me he was cutting the railing on the porch. I asked them to return our down payment. Told me I signed a contract and had three days to dispute it. He had told me he would do the work in two weeks.

Description of Work
replacing the railing on the front porch

I'm going to use them again.

Description of Work
They removed awnings from my front porch and replaced it with new awnings. They did excellent work.

They gave me the run around and they placed blame on everything on others. This has taken 3 months, yesterday they came to put in the window and they didn't fill the gaps so cold air is coming through. They stole my stained glass windows they said they cracked and they threw them out. I am so frustrated with this company. He said he would be back in 4 days he guesses.

Based on our experience, this is the WORSE construction company in Michigan. Our intent is to warn Senior citizens and women in the region, so that they do not fall prey to Good Housekeeping Construction. Before you hire this company, research their license (2101067320) through the Department of Licensing and Regulatory Affairs and you will find that the company received two disciplinary actions that were backed by fines for failing to make repairs/corrections. We made a mistake by not doing so. We paid in full to have a new roof placed on our home that would take care of a major leak. Once the installation was completed, we noticed that the leak was still active. We called them so they would honor their warranty and make corrections. They made two attempts to inspect the situation and never returned. Over a seven month period we called and called to get them to come back to make corrections, but they never did. In the months that followed, four new leaks in different areas happened in the home causing major damage to the interior. We took Good Housekeeping to court and to arbitration. During that time we discovered that the company did not pull a permit after the City did an inspection. The arbitrator rendered an award in May that would allow us to hire another roofing company to make corrections, but, as unbelievable as this may sound, Good Housekeeping has failed to pay the award in full. Good Housekeeping Construction delayed, denied, and defended their poor roofing installation, which caused interior damage and financial strain in legal fees. The worst part is that an 80-year old woman has to live under a roof with five leaks, while the owner and workers of Good Housekeeping are nice in dry in their homes. It just isn’t fair, and we do not want any women or Senior citizen to ever go through what we experienced.

They never fixed the leak when we pointed it out and they never came back to fix the leaks. Since the first leaks happened, four other leaks have started. We had to take them to court and arbitration. We are having to take them back because they have not paid us what they were supposed.

Description of Work
We hired them to do a complete tear off and a new roof.

she tried to sue us but was thrown out of court. we voluntarily went to arbitration for good will. she was awarded half the money she requested. we volunteered to fix work that needed repairs and denied us the opportunity. Original contract was with hter husban and unfortunately he dies. daughter gave mother terribl information and therefore never had a chance to really do anything to satisfy them.
1.0

Description of Work
They scheduled an appointment with all of my contact information and did not show or call to reschedule.

we were 15 minutes late and no one was home. did not return our calls and when he finally did was rude.
5.0

Description of Work
They put down some wood overhang on my porch and installed awnings for me.

They did a great job on the bathroom. I had them redo the paint job and it looks great. I have ha nothing but good comments on the work they had done for me.

I have not had a problem since they did the work. They were great. I had no problems with them.

Description of Work
They did waterproofing for my basement.

Because of my work schedule I asked for 8am on a Monday. The guy who answered said it might have to be 9am but the worker lived in my area. I told him to call me either way. I might be able to go into work a little later. No one ever called me back or came to do an estimate. I used another company with Angie's List who did it all right.

Description of Work
I called to get an estimate.

we never had anyone working for good housekeeping living in her area . she was told we no longer work in ypsilanti and we therefore would not be coming out.
5.0

THIS COMPANY WAS REFERRED TO ME BY MY NEIGHBOR. I LIKED THE WORK HE DID ON HIS GUTTERS AND HE DID THE SAME QUALITY WORK ON OURS. THEY ARE A FRIENDLY BUNCH OF GUYS AND WE DID GET A WARRANTY ON THEIR WORK.

Description of Work
THEY REPLACED THE GUTTERS.

I WAS NOT SATISFIED WITH THEIR WORK. THEY MADE A HUGE MESS AND THEY DID NOT DO WHAT THEY TOLD ME THEY WERE GOING TO DO. IT ALSO TOOK THEM A LONG TIME TO COMPLETE THE JOB.

Description of Work
THEY REMODELED MY BATHROOM AND MY GRANDDAUGHTER'S BEDROOM.

THEY DID GREAT WORK. THEY GOT THE JOB DONE FAST AND MADE SURE THAT THEY CLEANED UP THEIR MESS. THEY WERE VERY RESPONSIVE AND SHOWED UP A FEW DAYS AFTER I CONTACTED THEM.

Description of Work
THEY REPLACED MY GUTTERS.

THEY ARE A VERY EXPERIENCED ROOFING COMPANY. THEY HAVE VERY AFFORDABLE PRICES. THEIR SERVICE IS EXCEPTIONALLY GREAT. THE WORKERS GOT THE JOB DONE QUICK AND DID TERRIFIC.

Description of Work
THEY BUILT A NEW ROOF FOR MY HOME.

I THOUGHT THAT THEY DID A GOOD JOB. THEY WERE VERY PROFESSIONAL. THE WORKERS WERE VERY POLITE. THEY HAD THE JOB DONE FAIRLY QUICKLY. I WAS VERY IMPRESSED WITH THE WORK THAT THEY DID.

Description of Work
THEY CLEANED MY GUTTERS.

THEY CAME AND GAVE ME A PORCH AND A WALKWAY TO THE SIDEWALK. IT WAS WONDERFUL OF THEM TO MAKE SURE THAT EVERYTHING WAS O.K. WITH ME AND THAT I WAS HAPPY.

Description of Work
THEY POURED CEMENT FOR THE NEW PORCH AND WALKWAY TO SIDEWALK.

THEY DID A HORRIBLE JOB. THE KITCHEN STILL IS NOT DONE, AND THEY COMPLETELY MESSED UP THE FRONT PORCH. IT WAS LIKE THROWING MONEY DOWN THE DRAIN. EVEN AFTER THE CITY TOLD THEM TO REDO THE PORCH WITH SCREWS, THEY STILL USED NAILS.

Description of Work
THEY REMODELED OUR KITCHEN AND BUILT OUR FRONT PORCH.

I WAS REALLY NOT HAPPY WITH THE WORK THEY DONE. THEY HAD TO COME BACK OUT TO REDO MY GUTTERS TWO TIMES. THE QUALITY OF WORK WAS REALLY POOR. I WILL NOT USE THEM AGAIN.

Description of Work
THEY REPLACED MY ROOF AND GUTTERS.

AFTER ANOTHER COMPANY HAD BOTCHED A REPAIR JOB ON MY GUTTERS, GOOD HOUSEKEEPING CAME OUT AND THE JOB THE RIGHT WAY. THEY DID A FANTASTIC JOB AND THEY EVEN REPAIRED A BIRDHOUSE FOR ME AT NO EXTRA CHARGE.

Description of Work
THEY REPLACED THE GUTTERS AROUND MY HOME.

I WAS PLEASED WITH THE PROMPTNESS OF GOOD HOUSEKEEPING CONSTRUCTION. THEY WERE VERY FAST AND HAVE QUALIFIED EMPLOYEES. THEY CLEANED UP AFTER THEMSELVES AND GAVE ME NO WORRIES.

Description of Work
THEY SIDED MY HOUSE.

GOOD HOUSEKEEPING IS A WONDERFUL COMPANY, AND THEY ARE VERY RESPONSIVE. MY ROOF STARTED LEAKING AND THEY CAME AND REPLACED IT VERY QUICKLY. THEIR PRICES ARE MORE THAN FAIR.

Description of Work
WE HIRED THEM TO PUT A NEW ROOF ON OUR HOME.

I AM SURPRISED THAT THEY ARE SUCH A GOOD COMPANY. I WAS IN NEED OF A ROOF AND THEY JUST HAPPENED TO CALL AT THE RIGHT TIME. THEIR PRICE WAS GOOD AND THEY WERE VERY PROFESSIONAL.

Description of Work
THEY CAME AND PUT A NEW ROOF ON MY HOUSE.

THEY NEVER FINISHED THE JOB THEY STARTED. I WOULDN'T RECOMMEND THEM TO ANYONE BECAUSE IT TAKES THEM TOO LONG TO FINISH THEIR WORK. I WILL NEVER USE THIS COMPANY AGAIN.

Description of Work
THEY REMODELED MY KITCHEN AND BATHROOM.

GMC Painting LLC is a family owned business, providing the highest quality painting services in the metro Detroit area. With nearly 40 years of combined work experience, a team of father and two sons will work to ensure that your project is completed in a timely and professional manner.  …

GOOD HOUSEKEEPING CONSTRUCTION INC is currently rated 3.5 overall out of 5.

No, GOOD HOUSEKEEPING CONSTRUCTION INC does not offer eco-friendly accreditations.

Are there any services GOOD HOUSEKEEPING CONSTRUCTION INC does not offer?