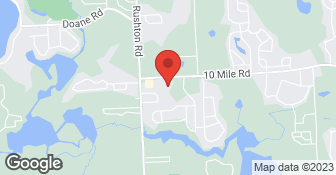 Trademark Building Solutions, LLC is a locally owned general contracting company servicing Southeast Michigan. We are known throughout the industry for our professionalism, drawing on nearly 40 years of combined experience. With all of our projects being owner managed, we bring confidence and security to every home and business owner. TBS offers free estimates and consultations to help you through an often confusing process. We act as your advocate, bringing honesty, integrity and quality workmanship to an industry that often lacks such characteristics. Our mission is simple: we treat our customers like family and we build your projects as if they were our own!...

This is the second major project we've done with Derrick and there is a reason we brought him back. His work is top notch. From the planning stage through finished product, he is prompt, professionally and extremely talented. All of his crews are talented and a joy to have around. Projects with contractors are always good if things go well. We had some unforeseen issues with our project that could have gone bad. Derrick and team were accommodating, supportive and flexible to work through those things with us. Our finished project is exactly what we expected. We could not be happier with the result.

Trademark was very professional and got the job done with great timing. Highly satisfied and will absolutely look to them for remodeling we want done in our basement. The best around...

Derek from Trademark Building Solutions was quick to reply to my call and worked with me and my insurance adjuster to make )sure everything was handled professionally and in a very timely manner. Very impressed. In fact i liked the work they did so much i think im going to have them remodel the bathroom in the Master beadroom of my house..

Description of Work
After a local storm a tree came down damaging my house, so structure repair roofing ,gutters, and plenty of miscellaneous........

Derek from Trademark Building Solutions was quick to reply to my call and worked with me and my insurance adjuster to make )sure everything was handled professionally and in a very timely manner. Very impressed. In fact i liked the work they did so much i think im going to have them remodel the bathroom in the Master beadroom of my house..

Description of Work
After a local storm a tree came down damaging my house, so structure repair roofing ,gutters, and plenty of miscellaneous........

We were very pleased with the bathroom remodel and flooring installation that Trademark Building Solution, LLC provided. Derrick Dixon and his crew members were very efficient, well organized and paid close attention to details. We were on a tight timeline to get the project completed and Derrick was able to beat the original schedule by a couple of days. Derrick?s professionalizm included building a working and personal relationship that made communication very open ended. When issues or clarification presented themselves, prompt communication and constant updates related to progress were given back to us. We always felt comfortable to reach out to discuss the project?s progress.

Trademark did an excellent job. Each day they set up drop cloths to cover the path of which they traveled to and from the entrance. They contained the dust by sealing off the master bathroom with plastic. Prior to leaving each day, they vacuumed their mess and shared progress with us. As design questions arose, they consulted us. In addition, we have a nine-month old baby. During the few days of demolition the workers worked around our nap schedule. The project was finished on time and there was no hidden costs; we paid exactly what we were quoted.

Description of Work
The pan of our shower began leaking. Because of the design of the bathroom, our shower, drop-in soaker tub, tub backslash, and bathroom floor needed to be gutted and replaced. The wall adjacent to the shower had mold damage from the leak, there was also missing studs and insulation. Trademark replaced the majority of our bathroom (salvaged, per our request, the bathroom vanity).

Beautiful! We love the results! The time involved was as initially estimated.

The work was exceptional. The rooms all look completely different after the remodel. Prior to the remodel, the living room had a popcorn ceiling with dated wood beams, textured walls, outdated wainscotting, no lighting whatsoever (was lit by lamps), and had old windows that were warped and hard to open. We had an old wooden deck that needed to replaced, and our upstairs bedroom had suffered water damage from a roof leak. This was the second major construction project that was done on our home since we moved in in 2009. The difference between the craftsmanship of Derrick's team and the craftsmanship of the prior builder is noticeable, to the point that friends who come to my house for the first time have commented on how nice the paint looks in the rooms that were remodeled by Derrick's team. We were also happy to have recessed and directional lighting installed in our living room and basement. Previously, those rooms were lit by lamps as our house was built in the 1940's and didn't have build in lights in most rooms. Derrick also completed removed drywall, wainscotting, popcorn ceiling, added insulation under a previous addition that had been done on the house, and replaced a large picture window and a side window. Also added a Trex deck off the back of the house to replace a wooden deck. We couldn't be happier with it. It has zero maintenance and unlike the old wooden deck, we don't have to worry about splinters or the wood being slippery after it rains. This team pays attention to every little detail. If we had any further major renovations or if we choose to build a custom home in the township, which we are considering, we would definitely use Derrick.

Description of Work
Derrick's team restored and remodeled multiple rooms in my house that had been damaged by water as a result of a prior poor construction by another builder. Repainted several rooms, replaced windows, installed lighting, converted popcorn ceiling to drywall. Installed Trex deck.

Complete service Restoration handles all emergency water damage issues. If you have had a pipe break due to recent cold weather we are standing by to help! We specialize in water extraction and structural drying. CSR is owned and operated by two partners with over 50 years of combined experience. These partners, Ron Minando and Dan Grace work every project with the help of highly skilled and trained employees. We have lasting relationships with a small group of trusted sub-contractors when specialty services are required such as plumbing, HVAC, electrical and high-end flooring. CSR accepts payment in the form of checks or money orders, VISA and MasterCard. We are happy to offer deductible assistance on insurance claims. We also provide reasonable payment plans.  …

DRYmedic Restoration Services offers 24 hour 7 days a week emergency service. We work directly with you and your insurance company. Our employees are IICRC certified, licensed and insured. We strive to make sure you and your loved ones get your home or business back from any type of water, fire, smoke and mold damage fast. We are centrally located in Bloomfield Twp. Michigan to service the Tri-County area.  …

Insured
All statements concerning insurance, licenses, and bonds are informational only, and are self-reported. Since insurance, licenses and bonds can expire and can be cancelled, homeowners should always check such information for themselves.To find more licensing information for your state, visit our Find Licensing Requirements page.
General Information
Free Estimates
Yes
Eco-Friendly Accreditations
Yes
Payment Options
Check
Senior Discount
No
Emergency Service
Yes
Warranties
No

Trademark Building Solutions, LLC is currently rated 5 overall out of 5.

No, Trademark Building Solutions, LLC does not offer a senior discount.

No, Trademark Building Solutions, LLC does not offer warranties.