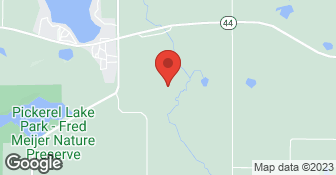 Arrived promptly and very professional. Sent us a written proposal for review. Suggested we might want to consider a new roof due to bad areas on the roof. This led us to considering a new roof and not doing gutter repairs/adjustments.

Description of Work
Gave us an estimate on gutter repairs/adjustments.

Description of Work
They installed a new roof.

Rick was very responsive to initial contact. Our chimney had been leaking around the side, causing some damage to the interior drywall. We had attempted to have it repaired several times in the past by various "handyman" services, however these repairs never held up to a really hard rain. I was concerned that a roofing company would try to use this to tell us we needed to replace the whole roof. Rick was able to evaluate the issue within two days of requesting an estimate, and he said we only needed to remove the shingles 3 feet around the chimney, and replace the old flashing with new that went a little further up the chimney. They were very busy, but were able to get the work done in a very timely manner, which was appreciated as we were just about to list the house for sale and didn't want to have an unaddressed leak! The repair was done in a couple hours, looks great and will last for years! I wish we had called Smart Roofing Systems the very first time we had a problem, instead of wasting money on "patch jobs". Get the job done right the first time, call Smart Roofing Systems.

I called Smart Roofing and told them of the issue we were having. I was given a quote over the phone (which was over $200 less than another company and that company was going to just put tar around the vent). I could not be home at the time the serviceman came. He called and gave me his thoughts on the issue and repaired it as indicated. Quick and friendly service.

Description of Work
Replaced the flashing around a vent.

Description of Work
Rick provided the materials so we could do a simple roof repair ourselves. We have not done anything yet due to weather and other pressing matters, but we are thrilled to be able to perform the repair ourselves before winter arrives, and not wait until spring to have the leak fixed by a professional. We will call him if we run into any problems. Rick thinks "outside the box" and does not recommend expensive solutions when they are not necessary. We highly recommend him!

Overall they did a great job. They started ahead of schedule. Finished in about 2 days. They did gutters and a new roof.

The installation went great and looks good. The cost was exceptional compared to the competition. Communication could be slightly improved and clean up could have been slightly more thorough, but nothing that deserves less than an A rating, just for future costumer relations. Thanks for the new roof. I highly recommend you get a quote from Smart Roofing.

replaced non-existing soffit, took off old fiberglass and replaced with shingles on my patio deck and will be putting up gutters.

Description of Work
Replaced soffit, put shingles on my patio deck and will be replacing gutters soon.

They gave me an accurate estimate. Cleaned up after and made several stops to check on the job.

They were excellent and did everything just as they said it would be done. They were very reasonable and I highly recommend Smart Roofing.

Description of Work
They stripped and re-roofed both buildings, a home and a storage barn.

I was, at first, a bit worried about the outcome of our roofing project since the quote from Smart Roofing was significantly less than the other quotes we had received to tear off and replace our existing roof. My fears were totally unfounded however as the service we received and the quality of the finished project was exceptional. During every step of the project, Rick and his team were prompt, courteous and very professional. Tear off was completed with almost no impact to the house or shrubbery and the work site was spotless every evening before they left. The quality of the workmanship was outstanding and we are very pleased with the finished roof which is a big improvement over the old one. There were absolutely no surprises during the project which was finished right on schedule and on budget. I would not hesitate to hire Smart Roofing in the future and would highly recommend them to anyone with a roofing project. The cost was very competitive and I couldn't have asked for better service.

Description of Work
We had our 20 year old roof completely replaced by Smart Roofing. They tore off the original roofing materials, replaced two sheets of damaged osb and then installed new roofing materials including ice barrier, vent boots, shingles and ridge vents.

It was a very positive experience. They definitely knew what they were doing. They gave me a seven-year warranty on repair. Once they got into the job, they noticed that there was a lot more tear-down than initially thought. They stayed with it and didn't charge extra. Their price was the highest, but they also did the most work. I paid for what I got.

Description of Work
They did roofing work for me.

At Infinity Home Improvement, we make it our mission to combine excellent employees with superior products so that our customers can know that the job will be done right. This in turn lets our customers enjoy all the best life has to offer: safety, security, peace of mind, and a sense of family that will endure. That's why our expertly trained and experienced team is equipped to handle any size remodeling project from roofing jobs to siding projects and Gutter Helmet installation.  …

Armored Roofing & Construction is a family-owned company in Michigan that is founded on the principles of craftsmanship and quality. We have decades of experience and if it does not have to do with fortifying your home with world class quality, we don’t do it! Armored is your strongest partner in construction.  …

Smart Roofing Systems Inc is currently rated 4.8 overall out of 5.

No, Smart Roofing Systems Inc does not offer eco-friendly accreditations.