With Angi since December 2015 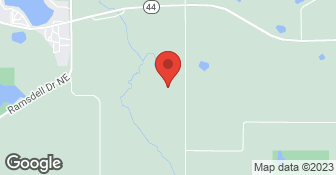 Sean was extremely quick to come out and was really helpful with helping us figure solutions for our awkward kitchen. Unfortunately we were not able to go through with the work at the time due to our own schedule but we would definitely call Denherder homes in the future!

This is the second job they did for us. We bought a house built in 1989 and in need of some upgrades. We had a tub that was as a big as a car, probably longer. The fixtures looked like they were from the 1980's. I will post before and after pics. Although I liked the tub because it was easy to get in and out of with a back injury, my husband wanted a more modern shower stall. Sean and his staff completely ripped everything out of the bathroom down to the two by fours. The price was increased because they had to demo the whole bathroom. They moved the toilet from against the wall to where the gigantic tub was and built a half wall for privacy. They put double individual vanities with a linen cabinet in between on the wall where the toilet and single vanity was. Although I was not happy with the size of the gigantic linen cabinet which darkens the room, it was completely my fault because I picked out kitchen cabinets by mistake instead of the bathroom cabinets Sean recommended (which, by the way, look stunning in my basement bath). I had wanted something a little fancier and should have gone with a plainer cabinet. The crown molding above this enormous linen cabinet, which I originally pictured as a half cabinet on top of the counter, looks terrible, but again, completely my fault. Sean's foreman, Seth, did a gorgeous job with the tile in our new shower. It looks really elegant. We now have a completely tiled shower and a ceramic tiled floor. We were only without this bathroom for about a month. Sean communicated with us every step of the way and he also installed 5 doors for us throughout our home. We are hiring him again to paint and carpet and modernize the house. I just hope he has time. He also builds new homes. For more details on the work, see the previous review.

Description of Work
Built a master bath from scratch.

It went very well. This newer family-owned business amazed me with their ability. Sean Denherder is a former neighbor of mine and it was during a chance meeting that I found out he was a home-builder a week before we moved. We actually toured one of his new homes after our former home sold a little too quickly. I am seeing Den Herder Homes signs popping up all over the place for renovations, newly-built homes, and homes under construction. I planned on interviewing 3 contractors to turn our recently-purchased 25 year old home into something new and fresh. I interviewed a contractor with 24 grade A ratings on Angie's List, and although he seemed very professional and trustworthy, my husband saw something in Sean Denherder (after only meeting him once previously) that cemented our decision. It was probably the iPad that he was drawing on the whole time we interviewed him. It was a tough decision. I really liked the first guy but I'm very glad we ultimately went with Sean. The estimate Sean gave us was in the neighborhood of the estimate we received from the more established contractor, although it was $2000 less. The third contractor was a big company with a designer and their estimate was almost double of the other two, although we did hire them to do our kitchen, only because they specialize in replacement doors for our cabinets, although Sean offered to do it. His team consists of electricians, plumbers and general contractors including his brother Seth who was the on-site supervisor and our main contact in addition to Sean. Within a week of accepting his bid, he met with us to go over the contract. He was very concerned about staying within budget during the whole renovation. He stayed in constant communication with us the whole time - we talked daily. Every single option was presented to us before they installed anything, whether it was the springy thing behind the door or the showerhead (I tried 3 different ones before I found one I liked and they patiently kept switching them out).They framed out the room, then installed the tub which Sean and I picked out together (love the four shelves in the tub), they ran the piping and the electrical, painted and trimmed the room. Sean put an allowance for all the components, cabinetry, fixtures, and hardware into the contract and sent us to his vendor to pick out our cabinets and countertop. We got a great deal at their outlet, picking out a 48' Sheffield cabinet, which Sean recommended (very sleek and modern) and a green granite countertop with built-in sink and backsplash. I believe the countertop was only $309 and the cabinet was less than $300. Sean gave us credits when we went "under budget" with our selections, which lowered the end price of the job even more. We then picked out a white ceramic tile with light gray and green accents and a risky paint color called "sage" that looks so nice, Sean thinks he might use it in his new houses. They kept the house clean and if it wasn't for the one day I came home from work early to find our whole house covered in dust, I would have never known the extra work they put in to get the house shiny clean before we came home from work every day. I can't say enough good things about Seth - we trusted him to keep our home safe when we were gone for the holiday and he did a great job as well as doing unrelated jobs such as hauling the leaf bags to the curb and changing light bulbs. Our basement bath looks so nice - it only took them 4 weeks and it really exceeded my expectations. It looked so good, we hired them to also put in our new master bath. In addition, they installed five farmhouse style doors in our basement which look great. And they installed an interior light switch for our garage. We will also use them to paint the entire interior of the house and to install new carpet throughout. But we need to put more in our piggy bank first.

Description of Work
They created something from nothing. They built a bathroom in our unfinished basement and it looks beautiful.

WE DO NOT OFFER STAINING OR PAINT STRIPPING Saint's Quality Painting is dedicated to providing high quality painting services around your home. As a locally owned and operated business, we feel invested in our clients as if their homes were our own. I have over 5 years of experience in the painting industry and I would love to take a look at any upcoming project in your home. We are offering free estimates and would love to hear from you. Please call or click for an estimate today! We do not offer any work on furniture or staining of any sort.  …

Our goal is to make Costumers satisfaction 100%.we value your time. we will show up on time. FREE estimates. We guarantee your satisfaction and we won’t leave until the job is done right. We pride ourselves on the quality work we provide, while delivering great customer service! Check out our services offered and call or click to schedule a free estimate today.  …

We are a family owned business focusing on interior and exterior painting and finished carpentry services to fit all of your needs. With a sharp attention to detail we are able to deliver on ALL customer needs and desires for each individual project.  …

How is Den Herder Homes and Renovations overall rated?

Den Herder Homes and Renovations is currently rated 5 overall out of 5.

No, Den Herder Homes and Renovations does not offer eco-friendly accreditations.