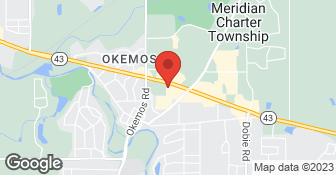 Custom Built Design & Remodeling is a custom home remodeling contractor. We ask our customers what they want, listen closely to their answers, then design and build to the customer's specifications. Our capabilities include custom designed cabinets, custom kitchens, custom bathrooms, basements and more. Some tell us there seems to be no limits to our creativity. We like that. Custom Built Design & Remodeling will go to any length to ensure that our customers receive the level of customization they desire for their home. No custom home remodeling project is too extreme for us

Description of Work
We had some deck repair/update needs.

Everyone at Custom Built was phenomenal to work with. They were very professional, detail-oriented, and strong/timely communicators. We'll certainly be reaching out to work with them again on future home projects, and would recommend their services to others.

Description of Work
We worked with Custom Built to have a home office installed in our new construction home. Services included: cabinet/workspace counter design and installation, moving a cold air return, moving a few outlets and adding cable, and wallpaper installation.

Mike Flory came to the house in early June and gave me an estimate of $2500.00. I gave him a down payment of $1000.00. He said the company was very busy but would fit the job in when possible. In early October, the job was begun. It took the better part of 3 days to complete. Everything looks very good. I am satisfied with the work. I do think it was pretty expensive but I guess that is typical.

Description of Work
He replaced a rotten board on a decorative deck under a garage window and a rotten top rail on the same type of deck on the second floor. The decorative deck under the garage window was completely deconstructed, then reconstructed, replacing the rotten board. He found that the deck was not quite level and that joists needed to be sistered. He took care of both of those issues The second floor deck top rail was replaced and all exposed lumber was restained with left over house stain.

Played phone tag for awhile then my husband thought he had an appointment via the secretary on a Wednesday am for which he stayed home from work but no one ever showed?!

Description of Work
Called early in the Spring for a deck remodel with tree.

The workers were courteous and the quality is excellent. It was very pricey so my expectations for quality were high, and they provided it, plus they provide a warranty. Because contractors were so slammed in 2014, the deck didn't get started until about two months after originally projected, so that was a bit disappointing but understandable. I would recommend them.

Description of Work
Custom Built built a deck for me.

I have been very happy with his work. He shows up on time and is professional.

Description of Work
They still need to do some outdoor painting. Michael Florey and his crew and project manager are all great. They installed new kitchen cabinets, new wooden floor in the kitchen and the foyer, new tile back splash in the kitchen, indoor painting in the foyer and on dark paneling in a side room and also in the kitchen. The new cabinets also included removing the old ones and removing the soffets in the kitchen. I had coriancounter tops and built in sink and he was the only one that was experienced and confident that it could be removed and reinstalled. He also found a contractor for me to put a new eaves trough and widow well in the basement when we had water coming in.

I can not say enough good things about the job they did. Michael came out, took a look at the project and designed the deck and stairs from the deck into an area of the yard that I wanted to fence in. After all the plans were made, the township building inspector would not issue a building permit because in the original plan, the deck would have infringed upon the required building setback by inches. Michael worked hard with me to redesign the deck to fulfill my wishes and meet the building inspector requirements. The work went smoothly..the builder was extremely meticulous and the deck is beautiful. The subcontractors for the fence worked hard and quickly and also did a great job. At first, I thought the price for the project was high but they were right in line with other contractors. I am so happy I chose them and highly recommend Custom Built

Description of Work
Replaced an old cedar deck with new, bigger Trex deck and installed aluminum fence around a large part of the yard

Mike was clearly the salesperson and he made a very positive first impression. He clearly gave the impression that he wanted us to be satisfied with the job, was very attentive and stuck to his schedules. I'm not sure there could be a better PR person. Chris took over the supervision of the job and we did not find him as easy a person to get along with. This was a very big job and you never expect everything to go perfectly. The primary disaster was the landscaping. With their suggestion we had decided on Michigan boulder retaining walls. This sounds nice but the boulders we got were mostly huge and did not match the aesthetics of our yard. We raised concern that there was no landscaping cloth used to avoid erosion around and under the boulders. We were told that it was not necessary that plants would prevent this. We insisted and they willingly rebuilt the walls. But on reading we discovered that all retaining walls should have a drainage system and we indicated that the back of the house tended to collect water. They argued that this was not necessary. In reality all it takes is some inexpensive drain pipe and some trenches for tiling. We also had a paver patio partially constructed by them but the sub-materials used did not meet the specifications of the paver company. In the end, we wrote out all of the landscaping out of our contract by change-orders. This was a pain but I think by that point they were as equally annoyed with us. We guestimated the cost of doing the landscaping on our own and underestimated. We ended up hiring Stiles and the first thing the mentioned, without asking, was the need for a drainage system. All of our walls now have a drainage system meeting the paver manufacturer specs and we have a drain tile out to our pond. We had 7 inches of rain over two days last month and no puddles in the back yard. I can't imagine what would have happened if we had stuck with the boulder walls without ground cloth. We had blown in concrete foam insulation which I believe was the first time CB had ever used this material. I think it is great but probably over kill for a sunroom as most of the heat loss is through the windows. This material is water based which meant that water started to seep through the drywall and as it was applied in winter it took forever to dry. We ended up solving the problem ourselves by putting a dehumidifer in the room. As we were having concerns we called the company that supplies the material on a Saturday and the president answered the phone! We got quite the lowdown and he suggest we have an Infrared survey of the room. We insisted on this and found several gaps in the insulation and had to have it reapplied. This was not CB's fault really but if we had not been proactive we would have ended up with a very poor job. We had a significant issue in figuring out how to heat and deal with the exhaust pipes from two gas fireplaces. We had installed the gas fireplaces about two years prior; one on the house wall abutting where the sunroom is, the other in the basement below the sunroom. I recalled that the fireplace upstairs could have blowers put on it to heat the house and I requested that we run these vents into the sunroom. Otherwise we don't have heat to the sunroom but this works great. But the sunroon was exactly where the fireplace vents are so these had to be moved. CB wanted to have these vent to the front of the house which would have been an eyesore. I finally came up with the idea of a chase in the sunroom and installation of a chimney and it looks great; added some nice character to the house. CB had an HVAC guy out and I was not impressed. We actually brought our HVAC guy out who CB ended up hiring. My overall assessment is that CB should stick with sunrooms and decks. Our deck is wonderful; though somehow in their design they failed to calculate the number of steps needed to land the staircase on our patio. So far the Trex decking is holding up well. The sunroom is built very solidly. I would rather have had the doors open on the yard side than the house side as the doors keep knocking the furniture... but just as much our oversight as theirs. We have triangular windows at the apex of the room and these were placed very close to the ceiling such that the frames around the window nearly touch the ceiling. These could have been dropped a few inches and it would have been perfect. So overall I would probably have given CB a and quot;Band quot; rating with the exception of the landscaping which if I scored separately would have been an and quot;Fand quot;.

Description of Work
We hired Custom Built to add a sunroom onto our house. In the end, we also included a deck and landscaping.

Description of Work
Remodeled backyard deck. Approximate deck size is 20' x 20'. Custom Built power washed the deck, installed perimeter handrails, cut away old perimeter benches, installed lattice around skirt of deck, and stained the entire area. Custom Built worked with us on payments and even started the work early (prior to me paying them the agreed sum for start of work). Owners have a good reputation and good experience in building / remodeling decks. Laborers who built and stained the deck were gentlemen and were productive with their time.

Give us a call or click to request a quote today! Power washing Landscaping  …

Our experienced team is dedicated to ensuring your interior/exterior painting project’s success. With premium products and excellent workmanship, we can GUARANTEE your satisfaction or your money back!  …

Custom Built Design & Remodeling is currently rated 4.1 overall out of 5.

No, Custom Built Design & Remodeling does not offer eco-friendly accreditations.