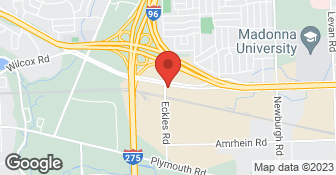 Surface Solutions has the exclusive Powerbond refinishing system which consists of a non hydrofluoric acid cleaner to etch the tub or tile, a bonding agent, and the Sharks Thane Ultra urethane topcoat which we helped developed with a large chemical company. We have 10 refinishing technicians that specialize in bathtub, tile and counter refinishing or reglazing. We offer Stone Fleck which is a granite look finish for tile and counters. There is a 5 year warranty on all work. Free Estimates. Fully insured....

I was very pleased with the services. The bathtub is beautiful and looks like a new one. The gentleman who did the job was very pleasant and helpful! A++++

Went well...the whole process from setting up the appointment to the end result. Job turned out great.

Excellent. Extra work involved as they had to prep the surface more because of last job from another company.

Description of Work
Needed tub reglazed. It was done prior about 10 years ago.

It was a great experience. Appointments were made and kept. I'm very satisfied with the work performed. I would definitely recommend Surface Solutions to my friends.

Not well finish was very poor and on receipt it stated there was an issue with surface prep resulting in fish eye and he would rework. I have been unable to contact this person they go under several different company names. Bathatastic, Motor City Refinishing. Owner is Chris and is a smooth talker till check clears.

My company is Surface Solutions, we do not go by any other name and are not associated with the companies you listed. Please remove this review from our page.
5.0

it was well done. Great experience.

It went great. The tub looks better than new!

First time they came, (A) the tub was unbelievably grainy...to a point where it actually caused abrasions of the skin---like tiny glass shards. There were (B) 3 large spots on the front of the tube that were just just missed and (C) paint came off the ceiling where tape was used. Had they not missed the 3 areas of the tub and needed to come back for a second round, their response was that "the grainy surface would eventually wear down"! (This was so bad that you could not take a bath without cutting the skin.) They were very responsive and came back after some miscommunication regarding the exact date. The company owner came to fix the job; this only afforded him an opportunity to provide excuses for the lousy job done in the first place. He said that the shards on the tub were caused by grout left on the surface (Wrong, because I bought a shop vac and vacuumed the surface before they arrived and the shards were/are also up the sides of the tub....gravity would have made them fall to the bottom.) Next, he said that the the areas that were just missed the first time around were "rubbed off"? Finally, the paint that came off with the taping was caused by a "thin" paint job. Before they arrived for the second round, I wet sanded the surface myself as they said they would do ...and guess what??...they did not resurface the sanded part!! Now, part of the tub is shiny and new looking while the tub base is wet-sanded and scratched! I am guessing that dirt will eventually show in the wet-sanded surfaces. The smell is absolutely toxic. I had to take down the shower head and remove everything from the bathroom and miss a day of work so that the job could be done again. To go through this TWICE without having the job done RIGHT is very disappointing. While I do not usually write reviews, I sure do read them! And this is why I have taken the time to write a review.

Wow that was quite disappointing to read how you felt about your experience with my company. The great thing about Refinishing is that mistakes can be fixed and everyone makes mistakes sometimes. The areas on the front of the tub were not "missed" as that is impossible when spraying the paint on. The tech's spray suit rubbed against the front of the tub and when he tried to fix it while the paint was wet he rubbed off those areas. He would have told you they needed fixed. We cannot be responsible for someone's paint job on your ceiling, we use a medium grade masking tape to plastic off your bathroom and protect everything. The paint on the ceiling was so thin I could see the old color under in several areas. I was not making "excuses" by saying the grout from the new tile could have fallen in the tub, that was simply one of the few reasons I gave for what could have caused the rough surface. I will accept responsibility when one of my techs makes a mistake and I always correct the issue but I expect both parties to be honest and not exaggerate.
5.0

I had my bathtub liner removed and then the bathtub itself re-glazed and they did an excellent job!

It went very well. From sales to actual job performed. Very professional and explained process and follow up care afterward. Very happy with outcome and would highly recommend this company.

Description of Work
I needed my bathtub and tile glazed.

Years of experience over 35 years.  …

We refinish existing tubs, tile, and counters. We do repair the items before they are refinished. We can remove towel bars, soap dishes etc and replace the space with a new tile prior to refinishing. Surface Solutions also installs new tile for bathroom floors or tub/shower surrounds. We also convert bathtubs into step in showers with the Clean Cut system and install grab bars, bath seats, and non slip mats.

We do not replace or install new tubs, or counters.

How is SURFACE SOLUTIONS overall rated?

SURFACE SOLUTIONS is currently rated 4.8 overall out of 5.

What days are SURFACE SOLUTIONS open?

No, SURFACE SOLUTIONS does not offer eco-friendly accreditations.

Are warranties offered by SURFACE SOLUTIONS?

What services does SURFACE SOLUTIONS offer?

SURFACE SOLUTIONS offers the following services: We refinish existing tubs, tile, and counters. We do repair the items before they are refinished. We can remove towel bars, soap dishes etc and replace the space with a new tile prior to refinishing. Surface Solutions also installs new tile for bathroom floors or tub/shower surrounds. We also convert bathtubs into step in showers with the Clean Cut system and install grab bars, bath seats, and non slip mats.

Are there any services SURFACE SOLUTIONS does not offer?

We do not replace or install new tubs, or counters.