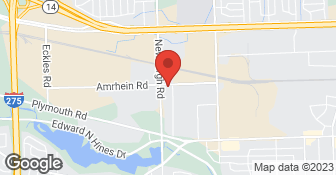 Cappy Heating is a industry leader in heating,cooling and air purifying technologies. We started Cappy with one goal in mind-providing are families with comfort solutions that fit not only their lifestyle but also there pocketbook. In addition our friendly, professional and award winning staff is here to answer any questions with around the clock service and we promise that you will never call and get a answering machine that it will always get a live person answering the phone. Additional DBA - Cappy Comfort Systems. Additional contact name - Jeffrey Caplan. Additional email - sales@cappyheating.com

Description of Work
Furnace repair on a 43 degree Sunday

The service person was nothing short of excellent and didn't try to play any "games" as some do (notably Kootz). Although the price for the one-time service was a tad higher than their competitors I think it was money well spent. To be honest, I was at first reluctant to call them because of their association with Home Depot which casts a negative image. However, I felt the service person knew his stuff and was completely above board, and that is something quite hard to find these days.

Description of Work
I had routine furnace preventative maintenance performed.

Cappy is my go-to for my AC and heating needs for the past 5+ years. I trust them with my units. Can't beat the quality of work compared to the many I tried before found them.

My HVAC system has stopped working 3 times in 5 months! When I call the office I explain the problem then wait until someone else returns my call who then tries to get me take covers off the unit and trouble shoot the issue for them! When that doesn't work I then still have to wait 2-3 days for a technician to come out and they supposedly fix the problem. The first time a fuse blew when the heating was turned on. It was freezing cold. The tech came out 2 days later replaced the fuse, and said we must have been hit by lightening (really?). Middle of June when we turned the A/C on the fuse blew again (there was no lightening). When this tech arrived 3 days later he said the fuse kept blowing because it was improperly grounded. He replaced the fuse and supposedly fixed the grounding problem. This weekend has been the hottest of the year with high humidity and the A/C only blows warm air. With the A/C on for 24 hours straight the inside temp is 83 degrees! Cappy's will call us on Monday to schedule a service call. Unfortunately I didn't have a choice on using this contractor. I will definitely never use this business once my warranty has expired.

Description of Work
This business installed the HVAC system in my new construction condo. I had no say in the HVAC company used.

Description of Work
Installed geothermal system. Everything looks and works good. Initial price is high, but with the 30% tax rebate the system is just a few thousand more than a 90+ furnace, air and water heater would cost. I should save that in the first 3 years

Description of Work
From the quoting service to the actual installation, it was first rate customer service. I purchased an air conditioner and furnace for my home.

Jennifer was such a sweetheart and walked us through relighting our furnace. She didn't charge us a cent.

Description of Work
Walked us through relighting our furnace.

They were prompt, courteous and friendly. And they cleaned up when they were done

I call initially in June and they came out. But the service man that came out was unable to access the drains located underneath the manufactured homes. He left and said someone else that could fit under the house would be scheduled to come out. I heard nothing from them and no one came back. After about 5 days I called back and I was told that original serviceman had not come in with tickets yet for office review and they would be seeing them that afternoon and would call me back. I never heard back from them. AC was still leaking all over the floor. I had to keep towels on floor to absorb water leaking from the unit. If they really did not, or do not, want to work on AC units in manufactured homes, I wish they had just been honest with me up front about it. Manufactured homes are a bit different in their maintenance needs. I know that. Just be honest with me. It was the not calling back or coming back that ticked me off the most. I ended up calling another heating/cooling company to fix the problem.

Description of Work
Check out leaking central air unit. Had water all over floor - was not draining

I was looking for estimates on replacing a 35 year old furnace. I wanted a 95% efficient Trane replacement. Home Depot sells Trane and Cappy is Home Depot's contracted installer. I left my name and number and was called by Cappy within a few days to set up an appointment for a free in-home estimate. The representative was on time, to the minute. We discussed what I was looking for and he inspected and evaluated my needs. Cappy provided an excellent price and did not try to sell me anything that I did not need or want. He even offered to throw in a service (refrigerant recovery for an old chest freezer and free disposal of the freezer) that I had not initially sought. Unfortunately for Cappy, another company provided a nearly identical price, but with an added humidifier. I opted for the second company. I would definitely seek out Cappy for any future work. I was very impressed with the company and their honesty. Their prices were excellent and they were very professionally represented.

Description of Work
Estimate for a furnace replacement.

I have used them about 3 times in the past for emergency furnace repairs in a new condo ( for me). Each time they have been prompt, quickly solved the problem and fairly charged for the visit. This visit was scheduled for me and my two neighbors to install a cleanout trap that should have been installed when the condos were built 12 years ago. A recurrent problem is that the drain tubing becomes clogged and overflows causing water damage into the units below. He showed up with the parts and finished the job in about half the time estimated and at half the cost at what seemed a very fair price.

Description of Work
Install a cleanout trap for the humidifier and airconditioner.

Jim came out and gave us an estimate. They were not high-pressuring and didn't try to sell us more than we need. He was real practical and down to earth.

Description of Work
They gave us an estimate for a new unit.

needed a new AC called and received about seven estimates after doing my research with the different brands and companies using Consumer Reports, Angie's List, searching the web for ratings which took about two/three weeks; ended up with Home Depot who use Cappy Heating and Cooling for the same unit a different company was about $1,000 more. Most companies tried to sell the highest efficiency. In Michigan the AC is on for two/three months. Did the math. paying for higher efficiency would not save money, it would take years to get the savings back. Paying $1,500-3,500 more which would save about $150-200 a year did not make sense because the AC is not on all year. But I could be wrong!!! so far so good, haven't had to use it / turn on yet

Description of Work
got a new AC

Cappy was able to send out a salesman to provide me a quote to replace my furnace with short notice. The quote seems a bit high, but after doing more research I may still consider going forward with them.

Description of Work
Jim from Cappy Heating & Air Conditioning Inc gave me a free i-nhome estimate for a new furnace. He seemed knowledgeable and presented me with three options to replace my outdated furnace. Overall I would say I was satisfied with the estimate, but he seemed to rush through the paper work he left with me. The quotes seemed a bit expensive so I will continue to shop around.

They are very good and not too expensive. They have excellent service. They had to come out two times after the installation to make adjustments. They came promptly and didn't complain about my requests. They worked with me until everything was just as I wanted it. They were the most reasonable for what I got. My unit is top of the line.

Description of Work
They installed a heating and a/c unit for me.

Hydro Clean of Michigan provides Air Duct Cleaning using a truck mounted negative air pressure 16,000 CFM system. Our attention to detail and satisfaction guarantee will improve your air quality and maximize your hvac efficiency. We can prove this by showing you the difference in your ducts with before and after camera scope inspections. For the most recent reviews please visit our Google overview page. Call us anytime at 248-497-6464 or visit Hydrocleanofmichigan.com .  …

Amistee Air Duct Cleaning & Insulation serves thousands of residential and commercial customers in Southeast and Central Michigan. In 2022 Amistee expanded its indoor air quality, home efficiency, and comfort efforts to the Mid-Michigan area by purchasing Dust Busters Air Duct Cleaning in Burton, MI. Our Mid-Michigan office is located at 2017 E Boatfield Ave., Burton, MI, 48529. Mike McCowan and Steve Dickinson are committed to helping the millions of homeowners and business facilities fight the constant problem of Indoor Air Quality (IAQ). From the beginning, Amistee has done one thing and one thing only, which provides premium and professional service to each and every one of our customers. Amistee constantly strives to be the absolute best and have the most qualified technicians in the industry. See for yourself and call us today at (877) 349-8877 or visit us online at www.amistee.com!  …