Chimney Sweep
Fireplaces
Chimney Repair
Chimney Caps
Gas Logs
Masonry
Firewood
Licensing
Insured
All statements concerning insurance, licenses, and bonds are informational only, and are self-reported. Since insurance, licenses and bonds can expire and can be cancelled, homeowners should always check such information for themselves. To find more licensing information for your state, visit our Find Licensing Requirements page.
Business Details 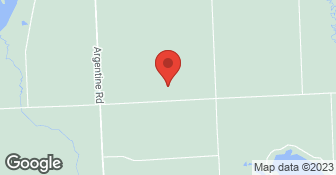 D&R Chimney Sweep is a full service chimney company we clean fireplaces and woodstoves, do repairs and instalations of woodstove. Also chimney caps and water protection of chimneys....

We specialize in lawn care, landscaping, hardscaping, fencing, patios, grading, etc. *We do not snowplow*

CJW Chimney Sweeping & Restoration is a small, family owned and operated chimney sweeping business with over 23 years of industry experience. We love this industry because it allows us to have personal interaction with each of our customers, which is very important to us. We started this business after helping a family friend with their chimney back in the 1980’s. It was because of that job that we found our passion and CJW Chimney Sweeping & Restoration was formed. Each job we do is personalized because we know every job is different. We have met many great people over the years and it is our customers that keep us going. What sets us apart from our competition is our commitment to always doing the right thing and our quality of work is second to none. We would love the opportunity to partner with you for your chimney needs.

Brian came out exactly when he said he would be at my home.  He was very helpful with explaining what he was doing, what he would be looking for and very efficient in his work.  He also gave us ideas to what we need to do during the winter with the fireplace and gave us a fair estimate for work to be done in the spring.

punctual, clean but changed the price once the work was completed. Added pulling insert cost after work completed. How would he clean the fireplace without pulling the insert.

I did not change the price it is 159 dollars for a chimney cleaning, to pull an insert it can depend on what is involved this was explained before any work is done. The inserts are very heavy. Also it was explained that his insert was not up to code, it should have a stainless liner connected to it. I tried to help him out but that obviously was not go enough. Sorry for that.
1.0

They were on my property for just over an hour. Most of that was cleaning the chimney for the agreed $165. The last 20 min were attaching a new cap instead of returning the existing cap. The new cap was put on backwards.

DESCRIPTION OF WORK
D&R Chimney Sweep was called to change my cap. Brian suggested the chimney be cleaned first. On the phone he couldn't give an estimate for the work I needed. We agreed to have the chimney cleaned for $165. Then once he could see what was involved he would charge me by the hour. The cleaning took about 45 min. I was then charged $260 for the next 15 min. that it took to complete the job. Before leaving Brian realized the vent tubes were incorrectly installed. I said I thought I could make it work. I couldn't and called Brian. He became arguementitive and said he did what I asked. For that kind of money I would have expected his expertise to over ride my opinion.

LOL, (deleted member name) called me back in November and I explained to him that I did not install gas units. He explained that no one would go up on his very high and steep roof. I told him that I would try and help out. After cleaning his fireplace for $159, the normal rate, I explained the charge for two men was $265. The job was dangerous for dropping a liner down his chimney, also cutting an...