Above and Beyond Professional services LLC. 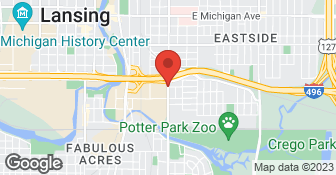 We would love to provide you with quality services to meet your every needs, we have a full builders license and are insured. We specialize in everything construction and everything landscaping. When we do jobs we think of them as our own homes we would love to earn your business and respect, as a company we strive to go above and beyond and do quality work. We have over 10 years experience and pictures to assure you're in good hands and also offer warranties. We want you to experience what quality, friendly, dependable services feels like so call, text or email us today for a free estimate and get these projects done right....

We are a professional pressure washing exterior cleaning service servicing all of mid-Michigan. We provide washing services for any home which includes roofs, siding, drive ways, garages, decks etc. We also pressure wash cars and provide yard clean up. We offer great deals and great service!  …

Prestige Landscape and Design is dedicated to providing outstanding landscape projects for our customers, utilizing innovative design and quality installation. We are focused entirely on landscape design and construction, offering over forty years of experience in all aspects of the landscape field including paver patios, retaining walls, water features, gardens, new landscapes and landscape rehabilitation. Our mission is to maximize and enhance the use, living space and value of our customer's property. Real estate appraisers know that a pleasing landscape can increase property values significantly. "Curb appeal" is considered to be one of the most important factors in selling a home.  …

Professional, courteous, knowledgeable, honest and fair. Very pleased and would not hesitate to recommend or hire again.

I had a small leak in the corner of my finished basement that over time had been getting worse. No standing water, but when we'd had a lot of rain the carpeting in that corner would darken so obviously there was a crack in the foundation somewhere. This year the amount of moisture was visibly more so it was obvious the problem needed to be addressed. Like another poster, I contacted a half-dozen of the usual suspects who do basement waterproofing in the Lansing area. Two-thirds either wanted to sell me a "system," (i.e., rip up my basement floor, install drain tile and a sump pump which I didn't need due to the nature of the issue and the orientation of my home) or didn't want to talk with me since I have a block foundation and all they dealt with were injection repairs on poured foundations which don't hold up over time anyway. I was delighted to have found Mike. He was very responsive; called back the very same day, listened as to what was the issue, and came out 2-3 days later on a Saturday to have a look. He did a thorough inspection inside and out, discussed what he believed the problem was as well as what was the best way to address it. He was very open and not offended to answer questions -- not at all evasive or condescending. It was obvious he knew his stuff. I received a quote from him via email that very same evening. Can't say that about the other two vendors I also got estimates from. I waited two weeks to get a quote from one -- and that was only because *I* called asked how much longer it would take to receive it! On the day of the job, Mike and his assistant arrived right on time. They worked steadily and efficiently in spite of the heat. Though I was told they had allotted two days in their schedule for the work, they were able to complete it in one and they were meticulous in terms of clean up. You wouldn't even know I had had work done on that corner of the house once they were through. Unlike other vendors I spoke with, Mike also warranted his work for 10 years. The others I received quotes from wouldn't warranty their work at all unless I went with an interior "system" and one the vendors who did provide a quote for exterior work went so far as to say their estimate may not reflect the final cost of the job, as they reserved the right to revise it once they were in the midst of the repair! In short, Above and Beyond Professional Services truly lives up to its name. Responsive, knowledgeable, prompt, fair, honest, customer-oriented, and professional And, most importantly, they do excellent work. I would have no hesitation whatsoever if the need arises for more basement waterproofing work to use them again, or to recommend them to others. Couldn't be more pleased/impressed. Thanks Mike!

Mike came recommended through a local group of real estate investors in Lansing. We ultimately had 4 people come look at the leak we had in our basement. A couple of these were the big name brand guys we all have heard about in Lansing. One of the four said it was too difficult for him and he couldn't help. The other two talked about alleviating the symptoms but not actually addressing the problem. Mike was the only one out of the four that actually talked about FIXING the crack. Bottom line, Mike arrived when he said he would and got me a quote in a timely manner. He showed up on the agreed date and got the work done in 1 day. When I came home, it didn't look like he had ever been there. In the evening, he sent me pictures and a short video of the day's work, including the large crack on the outside of the foundation...that is now fixed. I wish all contractors had this level of professionalism. Don't hesitate to contact this company.

We really appreciate you taking the time to share the experience you had with us [Member Name Removed], it really means a lot to us. Thank you for your business, it was a pleasure working with you

Above and Beyond Professional services LLC.