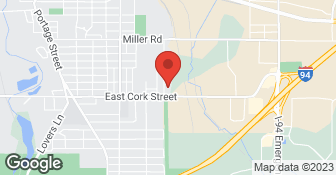 Third Generation Family Owned and Operated for over 65 years. Governors Energy Excellence "Contractor of the Year". Guaranteed Service and Installation. Offer Emergency Service for all your needs....

They have been very good and we would do business with them again. We would recommend them.

Description of Work
We have been using them for about 2 1/2 years. They put in a new furnace for us and they have serviced it since.

They came out and replaced a bad capacitor, and it worked well. Two weeks later it went out again, and they came back and added coolant. Both times the employee was efficient and professional.

Description of Work
A/C was not working.

Great and we are loving our cool air

Very professional. They called me and moved my installation date sooner when there was an opening.

They were recommended by somebody. They did a home energy audit which saved us $3,000. they knew about an energy incentive. In essence we spent $3,000 with them and we got a $3,000 check back because of the energy savings. I can't complain about that. They were professional and honest. My electric bill has gone down by about 25%.

I used them in 2010 and hired them again in 2012. They were professional. They knew what the newest technology was.

Bartholomew was great in every way. They were prompt in providing the bid, and scheduled the work as promised at the time of the bid. The installation itself could not have gone better. The technicians were on time (actually, about 10 minutes early!), they were friendly and explained everything I wanted to know, they were neat, and they got the work done as promised and on time. And they cleaned up after themselves and gave me a tutorial on the new thermostat. I have already recommended them to others.

Description of Work
I purchased a new furnace and had it installed by Bartholomew.

They did all of this in one day, which was 1/2 day ahead of schedule. The cost was as quoted. The installation was very neat and the guys making the installation were very nice to work with. Gary, who gave us the quote was very knowledgeable, friendly and very organized. He gave us a written quote about 5 minutes after we discussed the installation. They also handled all the paperwork for the consumers energy rebates. I plan on having them service the furnace and water heater in the future.

Quickly identified problem which was a faulty switch and did a PM on furnace as well. Will go with them in the future for sure.

Description of Work
Furnace not working.

The guy performed the service without approving it with me first. For something so simple he went and did it himself without notifying. We could have done this ourselves... just needed diagnosis. Way over priced. We were ripped off.

Excellent. Have used them in the past and will use them in the future. Prompt, friendly, knowledgeable service!

They are okay. They tend to be a little bit pricier. So, they probably are not necessarily the cheapest, but they do good work. They could have a little bit more competitive price.

Bartholomew was very responsive when I called that day about our furnace not putting out an appropriate amount of heat. The front office was great, found a repairman for us and got them out within 4 hours of my call. Dave, our repairman, was friendly, brought his own boot guards to prevent tracking of dirt through the house, and found the problem within a few minutes. Amazingly, he had the appropriate part in his van and was able to get everything replaced that day within 30 minutes of arrival and we were up and running! My husband had done some research on the furnace the night before, and Bartholomew was right on with what he thought the problem was, and the cost to us was exactly what he expected. We have used 3-4 other heating/cooling places in the past and we were most impressed with Bartholomew. We would definitely call them again.

Description of Work
Diagnostics on our furnace, replaced a bad inducer, cleaned the sensors and burners and reviewed combustion, CO levels and air filter.

Dealt with this company at a local home show for several years before we made the move. Went to showroom to review the product, set it up, and the 4 installers came out to install. Pleasant, competent, on time, and very, very fair pricing. The units have been a pure delight ( Fijitsu). Called Bartholmew again for a one year inspection just because we had never had this kind of heating cooling before- and they came out, checked everything out and were beyond pleasant. We have nothing but good things to say about this company and their product, and verbally recommend them any chance we get!

job was performed a promised. On time at budget

Due to a mid summer decision to do the work Bartholomew was quite booked when I placed my order. They were up front about this and the delay that would be needed. Having had friends who had been very satisfied with Bartholomew I agreed to the wait. When the work did start everything was done very professionally and with a high level of of craftsmanship in all aspects of the work. The crew was friendly and very neat, placing heavy canvas tarps over every area of carpeting where they had to travel. The work was done exactly when it was promised and all of the new equipment has worked exactly as described.

The company responded to my request for an estimate quickly. I found the price to be about what I had expected to pay. The installer arrived at the time and day planned on and went about his work quietly and efficiently, keeping me informed of his progress appropriately. Up to this point, I would have given them all "A"s. The trouble started when the work was completed. The installer explained to me the different parts of the system, showed me how to switch from heating to cooling. I signed the paperwork, paid the man and we were done. Or so I thought. It had not occurred to me to look up at the basement ceiling and inspect the duct work. As part of our contract, I had arranged with the sales person that a heat run would be installed that would bring heat to part of the basement where most of the home electronics are. That duct work was not installed. Now, I know that because I signed off on the job, I have no recourse. I accept that as a lesson learned. But I don't think very highly of a business that would take advantage of that situation to get out of work that had been agreed upon. I did call the business and ask about the missing duct work. I was told that the installer had been pressed for time to get the job done and start a new job, but that the installer would be calling me when he had some free time to come back and finish the job. That was in July. It is now October and I have not heard a peep out of the company's representatives. If you are more savvy than me, you will probably do well with this company, but I wouldn't count on them to do anything that they can get away without doing.

Description of Work
Installed a new heating and cooling system in my home.

excellent. Good communications, follow-up, and quality work. A bit more expensive, but worth it.

I got estimates from 4 HVAC companies before choosing Bartholomew. The base prices seemed very similar, with all four, but Bartholomew was able to give me a better/longer warranty and appeared more knowledgeable about what and where things should go. They were also very quick to respond to my inquiry, and seemed genuinely interested in providing me with what I wanted and needed. I was impressed with the professionalism and consideration of every person in this company that I made contact with either by phone or in person. Two installers put in the unit, did it in one and a half work days. They made sure I knew how to use the units and the thermostat. All areas were left clean and neat each day. After the final installation I was shown how to use things. Both installers were easy to ask questions of and helped explain anything I was concerned about. The electrician was brought in to do all the electrical work from Webster's. He is an asset to his company, also. Very efficient and knowledgeable. Even though I have an unfinished basement, the installers, and the electrician, treated it like it was just as nice as a finished one. I highly recommend Bartholomew.

Description of Work
They fixed the water heater, that was not installed correctly by previous contractor. They also put in the AC and the furnace.

They were very nice and extremely professional. The install went very smooth and they went above and beyond what I expected. I ran into an issue with the rebate amout that Consumers Energy was supposed to send, and they even went out of their way to ensure they took care of me. Excellent. Will use again in the future.