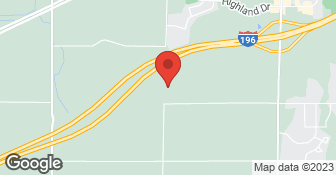 We know Michigan water! We do not contract our work out, we are a family-owned business with over 100 years of combined experience. We offer Michigan's best water treatment Systems, Drinking systems with 100% Customer Satisfaction Service. Rated # 1 in the World Customer Satisfaction by RainSoft Factory. We are Michigan's problem water specialists! Made in America with a Lifetime Warranty! FREE WATER TESTING AVAILABLE!! https://www.bluewolfconcepts.com/water-testing  …

Pipe Monster is passionate not only to bring you the values of the past like honesty and quality, but also the innovations of our present time. Instant water heaters, smart home plumbing devices, hot water recirculation, low threshold showers, and an un beatable value in our service department. If you are looking for a company with experience, look no further. Pipe Monster's got your back!  …

I'm having a dishwasher replaced and Lowe's installer wouldn't relocated the water line. Budget Plumbing was able to come out the next day, where other plumbers haven't responded to my call. He was neat, quick, professional, well-spoken and knew exactly what was needed. Price was reasonable. I would use them again!

GREAT! I was out of town on a golf trip and Budget plumbing was right on the spot to fix. Great service. I would hire again.

Service technician showed up without the necessary tools to start the job. The service tech did not have a drain snake for 3 to 4 inch drain. Work notes even indicated to snake the 3 to 4 inch drain. While on site the technician did not even evaluate or confirm the issue and did not bring a single tool into the house. The job was marked as "Done" and I was invoiced for the service call. Invoiced for Budget Plumbing"s complete failure. Budget Plumbing has no integrity.

Hello [Member Name Removed]. So sorry we were not able to satisfy. We were able to talk through the process on the phone and we had mentioned that the job was a little different that expected. When this was realized I talked to you to let you know the situation. The equipment need to be on site in order to complete the job needed two technicians to handle the heavy equipment. We offered to come out with a different crew to do so but you were not comfortable having us back. So at this point we canceled the work order or "marked it as complete" and did not charge for our time. So sorry again. God bless Budget Plumbing LLC
4.0

Very good, no precall though before arrival. I requested an estimate for installing a shower in the bathroom, I am still waiting to hear on it. They also took the toilet seat that came with the new toilet without asking. (I bought a different one to use). I did get it back before they left. Very good workers and job well done.

Description of Work
Plumbing for house

It is a wonderful feeling when we are able to do a job that is satisfactory! In this case this was never going to be able to happen. We had $525 into Zurn UL listed pex, $55 in pex connections, and $150 in frost free faucets and miscellaneous fittings hydraulic cement. At this price we lost money and sadly enough we not able to satisfy. Westly wanted to save money anyway he could which I can respect. He wanted to dig the trench, help run the line, and bury the line. I regret letting him do so! The pipe that he help with did not look great to say the least. We tried to accompany his request and desires but that was not able to happen. The job quote was sent and the job was approved. There were numerous conflicts on job from the first minute there. I had a bad feeling about this gentleman from the first encounter this was my fault for finally agreeing to assist him. Unfortunately throughout this job the owner was trying to redraw the contract the entire time. He added quite a bit of work which was not part of the quote and hence the reason the technician had to run to grab parts that we for other work which was not included. We did everything he asked originally and all of the extra jobs he added as well. The quote was for $1200 which was approved. I saw that he was not happy with the price so I charged him $1000.
1.0

Installation process was good. A gas leak was discovered about a year after installation (installed 10/31/18) and Budget has not returned two requests to fix the gas leak or to even give a price to come back and fix the issue. First request was using contact form via Budgets website four days ago. Second contact was by phone (live person) over 24hrs ago. Not a way to build trust and lasting relationships. Perhaps the live person never followed up with the proper inside teams - regardless, not a service level that works for me or my peace-of-mind. Original installation process was seamless and the sale is always the easy part. Service after the sale is what builds credibility and longevity with business relationships. Budget left me hanging.

The best way to contact us is calling the office at 616 988 5514. We hire a full time secretary for this reason most small companies to not. We do this for this exact reasonl, which is responsiveness to work request. The only day that we are closed would be Sunday to spend time with family and worship. So sorry if you called on a Sunday and we were not able to reply. Thanks for the opportunity to serve.
5.0

Finished the job in a timely manner

I texted Ryan in the morning and he got back to me in minutes. He said he could have someone there that afternoon. Jerry and Larry texted me that they were on route and showed up on time. After I showed them where the leak was. The plumbing was above all the duct work from my furnace. Although it was in a difficult spot, Jerry said it wouldn’t be any problem. He knew what needed to be done to repair the leak. All I needed was a new Fernco fitting. The one I had was ancient and needed to be replaced. He also installed a J hook to support the copper pipe. Once the job was done, he called me downstairs to explain what he had done. The job didn’t take long at all and the guys were very pleasant. I really appreciate the work they did. I’ve called on Ryan several times now over the past several years. I will continue to rely on them for all plumbing jobs. Thanks again Ryan!!

Description of Work
I had a leaky pipe down in my basement that came from my bathroom sink.

They were running late and kept us informed of when they would be there. They were a really good team who showed me the problems . They were quick to fix and gave me pointers on how to keep this from continually being a problem. They also charged much less than I thought and made no mess. I have other projects I need help with and took their card so I can use them again. Friendly , fast and a fair price.

Description of Work
Clogged drains and connectors to dishwasher