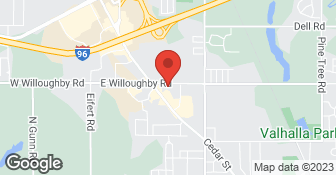 Purchased carpet for two bedrooms. The price was good and they were able to do it quickly, which is why I choose them. If I had only known. When I went to see the finished product I noticed they had taken the bedroom doors off of the wall and not put them back up. I assumed they forgot and called the office. I was told that the installer was going to leave a note and 'forgot', and secondly it "wasn't their job, they aren't carpenters". I understand that they aren't carpenters, but if you take the doors off- put them back on. Not only did they not rehang the doors, the carpet that they installed would not allow the doors to be rehung without sanding the doors down. I was unhappy and the customer service I received was beyond poor. The woman who took my calls was overly rude, as the was the 'supervisor' who called back. I had to hire someone else to fix the problem that they had left me, costing me more money. I will never use again. If you want professionals, look elsewhere.

Description of Work
I used American Flooring tore out carpet in my bathroom and installed a toilet. 1

Description of Work
What I thought would be a simple installation of a 10 x 12 vinyl sheet flooring in my bathroom turned out to be the most ridiculous and unprofessional service experience of my life. It took 3 months to accomplish and 8 different installers, some that never even showed up, and several that did (after numerous rescheduling) and walked off the job because they weren't informed by American Flooring of what the job entailed. They were "surprised" that a 2 x 2 foot of subfloor had to be replaced (due to water damage). Then when the toilet was pulled and replaced with a new (defective/crooked) toilet I was told to call a plumber and had to pay for a 2nd toilet installation. The job was finally completed, thanks only to a very professional 9th installer, who did an excellent job. I WILL NEVER purchase anything from American Flooring again.

Great! They have assisted me in picking out carpet for most of my house. This visit was to pick out carpet for a basement. THey were great in narrowing down what would be best based on my lifestyle. Carpet was ordered and installed within a few weeks. The installer was wonderful! He was so careful putting in the carpet as I just had my basement painted professionally. He took his time and cleaned up everything.

Description of Work
Picked out and had carpet installed in my basement.

Had some trouble getting the right tile from warehouse Had to select a different pattern, but it turned to be better We are very satisfied with the installation.

Description of Work
installation was very good, am very happy.

Fantastic. They did a great job especially in the thresholds to each room. I was worried about how that might turn out because it went from laminate to tile and some to carpet and some to other laminate and they made it look flawless.

Description of Work
I had laminate flooring installed in living room and hallway. Also had work done a couple of years ago - ceramic tile flooring in bathroom.

There was an area about 5x9 of a no wax vinyl in the basement where he, out of frustration, drug that sofa across that flooring and ruined it. He also threw trash outside the back door and left it, refused to put the sofa back where it was upon completion. I called and complained to the owner who sent a store manager and the same installer back to investigate. They looked at the fresh scratches and trash then just left without saying a word. This was during the holidays and I was also dealing with an illness. I was very bothered that I never received a response from this business manager and they were dismissive about their responsibility to the damage made. They picked up the trash and moved the furniture back. I wrote them a letter about the gouges in the floor and his response was a written reply back that said "call me". I did again and am now being told that he doesn't work there any more. However when I call, he answers. He's actually working at their "other" store which is owned by and named the same name. I called the Attorney General who confirmed both companies are 2 locations under the same name. I feel very taken advantage of and am frustrated about the lack of integrity and responsiveness by this company. I just want the repairs done from the damage they caused.

Description of Work
I had water back up in my basement. The insurance came in, we ripped up the flooring and cleaned everything up. I wanted glue-in nylon indoor/outdoor carpeting to be installed. The owner of this flooring company came and measured and said he would send 2 guys in to lay the carpet. On that day only 1 guy showed up. I had a queen sleeper sofa that would have to be moved. Trim would also have to be removed. The owner said they would do that at no charge. The installer was upset when he was there and told me "I get paid to do these extras" insinuating to me to pay him extra to do the extra work. I refused. The owner had separated the contract after writing everything up and noted on his copy only that there would be no extra charge for this but did not write it on mine. He also did not show a breakdown of costs: ie: labor, material, etc.

On November 14, 2008 the member stopped in a t American Flooring in Holt to have her carpet replaced in her basement because of a water problem. She selected carpet and made it very clear it must be installed before Thanksgiving holiday so her grand kids would have someplace to play. I personally wen to the home to confirm the measurements. While I was at the home, i had pointed out some old rotted tack strip that should have been removed with the water damaged carpet. We also talked about the sofa and chair that had to be removed before installation. I had suggested to her that she contacts her insurance company again about this additional labor and we could add them to the contract if her insurance oked them. There was no further conversation about the additional labor. I had also noticed the vinyl area at the bottom of her steps which was dirty, old and very much worn ( I didn't get on my hands and knees to look for rips or gouges). But i definitely remember the vinyl was in very poor shape and needed replacing, I have even made a comment on replacing the vinyl. On November22, 2008 American flooring went to her home to install her new carpet as promised. She had done nothing about the furniture or rotted tack strip removal. When the installer asked about the furniture/tack strip, she blew up screaming "that she was too old and ill to move furniture." The installer moved her furniture and removed the tack strip at no charge to her to keep her happy and calm. One week later, she called American Flooring complaining that the installer left 7-10 pieces of the old rotted tack strip outside her door, hadn't put back her sofa in the exact position she had wanted it and that her vinyl area now had a rip in it. Within one hour, I had sent out the store manager along with the installer to take care of her. Upon their arrival she greeted them at the door, making them aware that she would be tap e recording there entire conversation. The store manager and the installer moved the sofa into the exact position she wanted, removed the 7-10 pieces of tack strip forgotten next to her door and looked at the vinyl area. He reported the vinyl was gouged, but clearly this was not fresh damage. The damaged looked as if someone had thrown something down the stairway or something had fallen down the stairway that had chipped or gouged the floor. It did not look like something was dragged across the floor. Te store manager noted, the mark in the floor was small and could have truly been over looked for sometime and just now noticed after cleaning. Even if this was new damage to the floor, she has had many contractors in and out of her basement over the course of many weeks making repairs/cleaning/moving etc. , plus this was the play area for her grandchildren over Thanksgiving holiday. American Flooring did make several attempts to contact her by phone but she wrote us a letter saying she would only communicate to us by mail and wanted everything in writing. American Flooring as always wants our customers happy, so even if we strongly believe this gouge was previously there ans our installer had nothing to do with the mark. American flooring as a courtesy only wall replace her 5x9 area with a Mannington Benchmark style vinyl, including installation at no charge to her. Doug Daigle -Owner

Advanced Flooring Design is the #1 source for all your flooring needs! We specialize in all natural wood flooring, laminates, tile, carpet, & vinyl plank installations. insured & with over 20 years of experience in the industry, we guarantee the highest quality! In addition, a lifetime installation warranty is our promise to all our customers! We also offer free in-home estimates that will allow you to meet us personally. Thanks for giving us the opportunity to assist you with your next flooring project!  …

We offer a full array of flooring sales, design, and installation services with over 20 years of experience. At Optimal Home Services LLC, we believe in educating our customers on the type of flooring that would work best for their home, need, and budget. We offer discounts to military, civil service, teachers, and our returning patrons! Looking for an Optimal product at a great price? We have you covered! Contact us today for your Optimal flooring experience! (Formally Optimal Flooring Design and Conception)  …

AMERICAN FLOORING LLC is currently rated 3.3 overall out of 5.

No, AMERICAN FLOORING LLC does not offer eco-friendly accreditations.