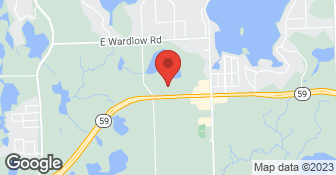 The main focus of Moonshine is to keep the exteriors of all residential homes and local businesses alive and well. Mother nature can make it very difficult to maintain a clean and well polished property - this is where we come in.  …

Allegedly, he believes that running over protesters in the street is funny and even offered to contribute money to the car detail job of this one guy who did ran over protesters. Last time I checked: pedestrians have right-away over drivers. I personally wouldn't spend money on someone who have such disregard for human life.

Description of Work
I wouldn't do business with this sociopath.

Steve is excellent at what he does. I would recommend him wholeheartedly.

Steve pressured wash my house and deck and painted part of the exterior on my house. I have him pressure wash my house every year because it is north facing and grows moss quickly. It's incredible how he can make my house look brand new again. He works quickly and listened to what I wanted. I'll definitely be using him again.

He did an excellent job; I would rehire him to treat the deck again.

Description of Work
Steve re stained my deck.

Work was done on time and in a professional manner. You'd be crazy NOT to hire these guys. Will use them again when it's time to paint my house.

Description of Work
Steve and his crew power-washed and stained my deck in addition to doing some minor repairs. They also power-washed the exterior of my house, walkways, etc.

Steve from Deck Defender not only did what we needed but also sanded rough spots and hammered down all nails that were popping up a bit on our wood deck. Steve was kind, respectful, easy to talk to and professional. Great work and thank you for going above and beyond expectations.

Description of Work
We needed our deck pressure washed and stained.

The dock looks brand new like it was just installed. The stain is beautiful. I love it!

Description of Work
Dock hasn't been done since I moved in 3 years ago.

Great price, excellent work (attention to detail) and a great guy to deal with!! I highly recommend this company!!

Description of Work
My outside deck, dock and porch were all power washed and re-stained. My house and fence were also power washed.

Originally, I was impressed by the quoted price, and then I texted that I needed a special stain due to condo rules, and that the deck company owner should let me know if there was an issue. Five days later when I attempted to confirm, I gave him the stain number, and he acted like I had never told him about the special stain. He gave me an increased price and also told me that, in addition to the stain, he would need to purchase a throwaway tarp (Why? Aren't they just to catch drips? Do you need all of your drop cloths to match?), rollers, and "extra of material." When I asked him if he could explain to me why he would need the additional supplies on top of the stain, he told me that he didn't "have time to bicker" about money when he makes $6000 a week, and told me to **** OFF in all capital letters. I had actually said I was not trying to haggle but was just wondering why he needed the materials..."that I just wanted to understand and have clarification." He then said, "So call somebody else, I don't care." Trust me. I called somebody else. Somebody who claims to be a business person who can't simply explain to a customer why there is a price increase and why she is paying for the materials needed for the specific job will never receive money from me. To top it off, to have a service provider tell me to **** OFF when I asked one question about why materials were needed for a job is reprehensible. I also find it deplorable that this vendor portrays himself as so honorable, specifically making mention of the United States Marine Corps and being a veteran as a selling point, when the first thing he did was conduct himself in the most dishonorable way when asked a very simple and valid question. I highly recommend NOT doing business with this company unless you only do things the owner's way and don't ever want to know where your money is going or expect any sort of explanation or answer to a simple question, which is all I wanted. I am shocked, floored and very disappointed in Deck Defender.

I tell everyone on the phone when I first talk to them I use TWP Total Wood protection for natural color decks if it happens to be a painted deck I use another product... I quoted it for TWP... then I was asked to use a different product that I don't use... and told her it would cost me about $50 more in the form of a roller, a tarp, some plastic, some tape and other things I'm going to have to throw away after the job... at which point I was told she wasn't going to "haggle" with me... and I told her just fine I'm not going to have argue over $50 on a $200 job it's just not worth my time when I have weeks of work booked in advance after I tried to book you into the schedule early thanks a bunch
5.0

Steve was fantastic and did an excellent job.

Description of Work
Power washed and stained out deck