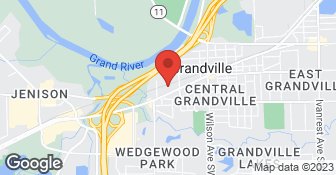 Mr. Roof of Grand Rapids is your trusted repair and renovation source for everything on the outside of your home or business. We started as a roofing company in 1962 with the best roofing products and the best services. Soon after, we expanded to siding, gutters, masonry, windows, insulation, and solar panel vents for a more complete customer experience.  …

Locally owned in Jenison, Michigan and family operated. At Window Depot we are committed to providing homeowners in West Michigan with the very best combination of window and door quality for their replacement windows and entry door projects. We sell and install windows and doors. Tom, Joel, and Brent pride themselves on providing expert product knowledge and honest advice in a comfortable, no-hassle environment. We are dedicated home improvement professionals with over 30 years of home construction and remodeling experience.  …

Locally owned company, with owners that have over 30 years of experience in the industry. Specializes in doors, windows, siding, and roofing. Products sold by Markin Co are environmentally friendly and innovative.  …

Outstanding work! The crew did a great job, above and beyond. Very courteous, professional and hardworking. They took great care to protect my wife’s perennials...nothing was damaged. Immaculate cleanup. Worked 12+ hours straight to get the job done.

Excellent. They were here when they said they were going to be. He came out and met with the insurance adjuster, he took care of all of that. They finished within two days. Everything was cleaned up.

Description of Work
Replaced our roof

We got immediate response for the estimate. however after 2 months of missed appointments and not giving a date for the repair we canceled the repair

Description of Work
We had repair that needed to be done.

Erratic weather caused a slow start but when they got on site and started working it went very fast. 8 - 12 crew depending on day over 20 -24 total hours on site over 3 days. They did a good job avoiding any damage to landscaping and structure and the couple of minor dings were resolved quickly and without question. Very good communication during and after work was performed. Jim was our main contact and he knew the insurance aspect and was able to talk me and my wife through everything and made sure we were happy throughout the process. I had heard about Premier from a guy at work who had used them twice before and they came very highly recommended and I would add my name to their list of very satisfied customers.

Description of Work
Whole roof shingle replacement due to insurance claim on storm damage. 44 square of shingles removed and replaced including roof caps. Also some light soffit work (less than 24 q sqft.) also due to storm damage. Cost below was what insurnace company paid for work.

The guys were polite and nice and they did a great job of cleaning up afterwards. The roofs look great, and the valleys (California pocket style, I am told) seem like they will have no water problems for years and years. I wouldn't hesitate to recommend Premier.

Description of Work
We had the roof of our house and barn replaced due to storm damage. They were able to do tear off and replacement of both structures in one day!

Good response from Taylor (sales) and Ric (install). Crew was busy full time. Replaced 48 square in 2 days. Day 1 looked like a bomb went off, but always covered. Day2 completed and cleaned up.

Description of Work
We did a complete tear off and reroof on a 22 year old roof. Shingles were almost see through because of aging. Replaced can vents with ridge vent.

We had many different companies give us estimates for replacing our roof. Not all companies got up on the roof to inspect it, Premier was one that did. Jarred was very thorough in his inspection and educated us about their products and installation process. Price wise they were mid-road of the estimates we received. Once we made the decision to go with them, Jarred promptly returned to confirm which shingles we desired and explained the timeline of once a date is confirmed when a dumpster would be delivered, roofing delivered, we would be informed who the team foreman would be and that he would be out during installation to see how it was going. They were very good at informing us of all of these things and not only did Jarred come out during installation, as promised, another staff, Rick, also came out to see how the process was going. Rick noted that one of the gutters near the ladder was dented and inquired if it was previously dented or if they dented it. Once I acknowledged that it wasn't that way before, he promptly took pictures and lined up an easetrough company to come and replace it. The very next morning it was replaced. I was very impressed with the workmanship of the installation team as well. They worked very hard and LONG hours to complete the job in one day and took great care in clean up and protecting the house. We are very pleased that we decided to go with them and would highly recommend them.

Now that the work is finished, I assume it was a good job. It looks great from the ground. We are unable to climb up to see the workmanship. We hired the company because two other neighbors were satisfied with their new roofs. We felt they tended to and quot;overpromise.and quot; They told us they would put plywood under the dumpster to protect the driveway, finish the work in one day and clean up completely. It was a three day job and they worked until after dark, so things were messy for three days. Then it took a couple of weeks for them to get back to finish a couple of minor trim issues. BUT they DID come. I believe some changes in personnel caused miscommunications. We felt that was all reasonable and they needn't have told us it would be a one day job. On the positive side, they didn't push us to purchase more expensive roofing materials, the final bill was exactly what was quoted, they don't require a deposit before beginning work, and they accept credit cards at a charge of 2% if you prefer to use your card.

Description of Work
They replaced the roof, vents, and added a ridge vent.

Price was fair compared with two other estimates. Job began at the date discussed. The day the job was to begin, the workers showed up in mid afternoon although I was told they would be starting in the morning. I met the crew and only one spoke broken English. The tear off started and the job was finished by around 5:00pm the next day. It appears that the job was done correctly but the crew left without contacting me at all. Clean up was pretty good, however I had to pick up five pieces of shingle that were in the lake at the end of my lot. I kept expecting to hear from Dan who had come out to bid the job, but as of this date, 10-3-13 I have had no contact with him. He had assured me when he came to bid the job that he would be personally checking on the job and he would be out personally at the end of the job to run a nail magnet over the yard and make sure everything was done to my satisfaction. Overall, the job appears to have been done correctly (won't really know until it rains/snows) and I have no complaint with the service. I would have appreciated it if the crew would have let me know when they were finished and given me a chance to inspect things while they were here. I feel that Dan should have at least called me to check on my satisfaction with the job. The shingles that were left in the water and no contact with the crew before they left or contact with Dan after the job are my only complaints.