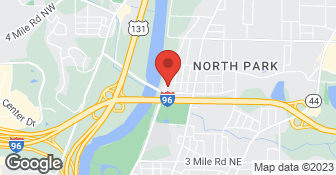 Locally owned in Jenison, Michigan and family operated. At Window Depot we are committed to providing homeowners in West Michigan with the very best combination of window and door quality for their replacement windows and entry door projects. We sell and install windows and doors. Tom, Joel, and Brent pride themselves on providing expert product knowledge and honest advice in a comfortable, no-hassle environment. We are dedicated home improvement professionals with over 30 years of home construction and remodeling experience.  …

Mr. Roof of Grand Rapids is your trusted repair and renovation source for everything on the outside of your home or business. We started as a roofing company in 1962 with the best roofing products and the best services. Soon after, we expanded to siding, gutters, masonry, windows, insulation, and solar panel vents for a more complete customer experience.  …

Locally owned company, with owners that have over 30 years of experience in the industry. Specializes in doors, windows, siding, and roofing. Products sold by Markin Co are environmentally friendly and innovative.  …

Outstanding, on time, very quality work. I will hire again for sure.

The workmanship seems to be decent. The issues stem from how the business is run. In short, zero expectation management. I had to repeatedly call them to check the status of my pending project, requesting a notification so we could plan to be on site to inspect work before the crew left. Finally after several "we're not sure when we can get to your project, but probably next month"s they called the day before to let us know they would be completing the work the next day. I received an invoice 9 MONTHS LATER, which included $380 for work not completed. I believe they were not trying to rip me off but rather, their internal communication is also poor and the crew never informed the office that part of the work was not necessary. After the invoice was received, I started getting calls from VerWys asking about payment. These were the only calls I received from them the entire project, except the singular call the day prior to the project. One week later, I received another invoice. I paid the invoice, except for the $380 line item which was never completed and with it, send a cordial letter expressing my disappointment in their communication and expectation management. I haven't heard back from them.

WE are sorry that [Member Info Removed] job was lost in the shuffle. At the time we were 75 jobs behind. Obviously we were not prepared for that amount of business. We hope they can understand that our intention was never to have this happen and our failure to communicate has been remedied . We sent out a free dinner for four at the local restaurant.
5.0

I first contacted them in July for an estimate. Doug showed up on time and emailed me an estimated proposal later that evening. I took the time to get several other estimates from other contractors before deciding to accept VerWys' proposal. They offered the best price and I appreciated the fact that they handle the rebate on their end from Consumers Energy. Once I signed and accepted their proposal on Aug 31st, they said they would contact me in about 6 weeks to set a date for the job. I called the office and we finally set a date of Oct 26th, first thing in the morning at 7a.m. The VerWys crew showed up about 45 minutes late. Although I had called on that Friday before and they assured me they would be there by 7a.m. They started immediately. No one that I talked to was sure if the spray foam guys were going to show up that day? Luckily, after about an hour, they did. The crew was very professional, and answered any questions that I had while they worked on the job. One of the guys pointed out that I didn't need as much insulation in the side walls of the house. The only areas that were lacking were under the windows of the house. They worked all day and completed the job by 2:30 pm. I walked around the house to check the clean up and they did a good job on that. Typically they would ask for payment that day, but since I didn't need as much insulation in the side walls, they would have Doug recalculate the final cost and get back to me. Before they left, I pointed out that I still needed the outside window trim replaced. They came back within an hour with a new piece for the window. I really appreciated the effort. Overall, I was pleased with the job that they did. The upstairs bedroom and basement are no longer drafty and cold. My only complaint is that I didn't realize that the residual odor from the spray foam would linger for several days, despite ventilating as often as I could. I contacted them to ask about it and they responded immediately. I told them that I would open the windows one more day and the odor was gone. I would recommend them to anyone in the Grand Rapids area looking for an honest company to deal with. Doug doesn't bombard you will a high pressure sales pitch. They did a great job. Thanks.

Description of Work
In knee walls: Removed old batting insulation, replaced with NuWool insulation, spray foam rim joist, installed 4 new gable vents and then made two air tight panels to seal off the doors to the knee walls . In basement: Spray foam all exposed rim joists. In side walls of the house: Blown in NuWool. I also had a new vent installed in the bathroom and replaced an outside window trim, previously damaged from last year's icicles.

.Doug came for the initial consultation and was not very convincing that he knew what he was doing. He kept changing his mind on what needed to be done for the insulation. I told him I just wanted it right. So finally he supposedly figured something out and went with it. Spray foam in one part and blown in the other part. He said I needed roof vents, vented soffits and a bigger gable vent. I had to email and call to see where the quote was and when he could come and do it. Finally got quote. The workers came in, never introduced themselves did the work and left without saying anything. We were not sure they were done or what. Never put the roof vents in or the gable vent. Came back a couple weeks later to put attic door on but never put vents in like we talked about. Then did not hear from them for 2 weeks and said they were going to charge more for the vents and soffits. I told them I was done with them and for them not to ever come back. They are very unprofessional and forgetful. We had over 7 different contractors in a 4 week time frame and they were by far the worst I have ever had.

Doug Vandermeer came out less than 24 hours after my initial call and quickly evaluated the situation, provided a plan of attack an explained my options and budget and my need to complete this quickly in order to meet a short deadline for a reinspection so the closing of our home with the buyer could remain on schedule. In fact the inspector for the buyer of our home was so impressed with The work Doug's crew did he asked me for their contact information so he could provide information to other sellers where mold remediation is required.

Description of Work
Attic mold removal along with correcting the conditions that caused the mold growth in the first place.

Excellent work: on time, very professional and very expert. Other insulators were willing to come and quickly blow in the insulation; Ver Wys had several good ideas to improve ventilation and overall money saving. I would recommend them very highly.

Description of Work
Attic insulation, including foam around one exposed wall and over recessed lighting, installation of power vent.

The Energy Auditor gave us specific ideas to assist in insulation, appliances,heating and cooling systems and windows. He was detailed, helped us understand the intricacies of the areas and plans to better our home's efficiency.

Description of Work
Reviewed and inspected our home for energy efficiency

- Date for the work was scheduled and a team showed up on time and worked all day - I hadn't gotten out to shovel before they arrived and they even shoveled my walkway - They had a cleaning crew clean up all the fine dust after the crew was gone - what a great service! - Was advised on rebates available - Doug was a nice guy and I felt comfortable working with him - A quote was provided and could be easily read - OVERALL great service and I would recommend!

OK, but we do not experience the level of fuel savings we expected. Probably never will experience a payback.

Description of Work
Added insulation to our house.

Estimates were given and explanations given by Doug about what each item would do to help in our previous year ice dam problem. Started at 8:30 finished by 1PM except for the electrical system for the power fan since this was a licensed subcontractor who came a week later and finished the work. Finished work, and cleaned up afterwards.