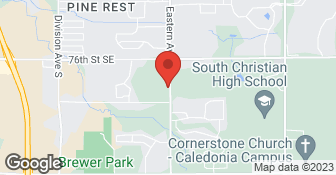 We specialize in Basement Waterproofing, Crawlspace Waterproofing (encapsulation), Concrete Lifting, Egress Window / Window Well Installation, Installation of Helical piles for new or existing foundations and Foundation Repair. Our team has over 20 years of experience and knowledge in the construction and waterproofing industries. We pride ourselves on getting the job done right the first time! Contact us today for your free estimate!  …

Duct Works invests in state of the art equipment that is designed for use in cleaning HVAC systems. We use a high powered, truck mounted, negative air cleaning system to service our customers. We are based out of Grand Rapids and are licensed by the State of Michigan. We are committed to the highest level of professional quality, maintaining and developing industry standards, and continuing technical and safety training. Locally owned & operated.  …

Foundation Systems of Michigan, founded in 2007, is a subsidiary of Groundworks, a family of companies that offers superior, proven solutions for your foundation repair, structural repair, crawl space encapsulation, dehumidification, and concrete leveling needs. They currently maintain offices in Livonia, Grand Rapids, and Traverse City. FSM is a recognized accredited member of the Better Business Bureau and devotes its years of experience, industry knowledge and specialized training to help customers protect their homes or commercial buildings from water damage, gutters, concrete sinking, and foundation failure.  …

TLDR: Their work failed, causing water damage to my home. Repair crew they sent blamed me for the damage without inspecting it. In September of 2020 we had McDonald Plumbing repair two pipes under the kitchen sink and install a new faucet. On Monday, January 12th 2021 I discovered water was leaking from under the kitchen sink and into my basement home office. When I checked under the kitchen sink, water was spewing from the hoses McDonald Pluming had used to connect the faucet to the water lines. Both hot and cold, every connector from the shutoff valve to the faucet was leaking. I also realized they used a total of four hoses to connect the faucet to the water; two on the hot, two on the cold. After shutting off the water and cleaning up, I inspected the basement area below the kitchen sink. The entire area was waterlogged, warped and spotted with mold including the sub-floor, cross beam and trim around a basement window. It was obvious that this job had been slowly leaking for a very long time. We called McDonald Plumbing and explained the situation. We were told the earliest they could send anybody was Friday. Not wanting to wait that long I began the process of replacing all four of their hoses myself. Half way through this project I was contacted and told somebody would be at my house on Tuesday. At this point I had lost faith in McDonald Plumbing's work and I just wanted somebody to assess the damage their work caused and present me a solution to make things right. Tuesday morning two men from McDonald Plumbing come to my house. I show them photos and video of their original install spewing water. I show them how the two tubes I replaced are no longer leaking, but the two remaining from the original install are still leaking. I explain that I no longer have confidence in their work and all I want to know is “How is the company going to make this right.” The man from McDonald Plumbing claims all they can do is replace the tubes (something I was already doing myself). Without inspecting the damage himself, he proceeds to blame me for the leak and the damage it caused. Holding in my fury, I politely ask him to leave my house. I then call McDonald Plumbing again explaining that I have lost faith in their work and service and that I don't want any representative from they're company in my house again. All I want is a refund for the original work they did and I'll handle any repairs and insurance claims myself. Again, I can no longer trust their work. The service rep I spoke with tells me the only course of action I have is to let an employee from McDonalds pluming back into my house to inspect the damage. Again I explain this isn't happening, as I can't trust any decision making or work they perform. That's where we left it. All I asked for was a $200 refund for the bad work they did. At this point the amount of time they've spent and bad will they generated fighting me has probably cost them more than the measly $200 I'm asking for.

They came last November and hooked us up, and said they would be back in the spring to spread topsoil and clean up the area. They just came back and did a great job of leveling things out and adding lots of good topsoil. Now I just have to spread grass seed and I will be back as good as new. Grace, in the office, is excellent at responding very quickly to any questions I had last fall and again this spring.

Description of Work
We needed to hook up to the sewer line instead of our septic tank.

It went well. Glenn took time and explained the questions and concerns I had. Great cleanup was done after the job.

Called for emergency service on a Sunday. Scott explained the additional cost to come out, but did not explain that the service price would be increased as well. Felt like they were price gouging because of the situation. Update: Received a follow-up call from Dan the next day to clarify the miscommunication. His explanation seemed genuine and appears this may have just been a one-off issue.

Great! Can't say enough good things about them! Will definitely use them again!

Description of Work
Main line coming in replaced from poly vinyl to copper. It was 60 feet, trenchless, done in 1 day, and they kept in contact with me throughout the process. $2650.00.

They were courteous and worked fast. They answered any questions that I had

Description of Work
Blue pipe was taken out. It had a reputation for breaking so they replaced it

Kurt arrived early and made the required repairs quickly. He let me know exactly what was wrong, what he would do to fix the problems, and what the cost would be to fix/repair. I am pleased with the service and would hire McDonald Plumbing again.

It went fine. They scheduled me in quickly, even over the Christmas/New Year's holiday week. The serviceman was prompt, professional an conscientious as he addressed our issues. I would use their service again.

Came out and gave quote same day. 2 days later came back and did the job. No trenching needed.

They came in with a full crew who knew what they were doing. They had all the right equipment and cleaned up afterwards. They finished on time and did a great job.

Description of Work
Replaced waste line under basement out to septic.