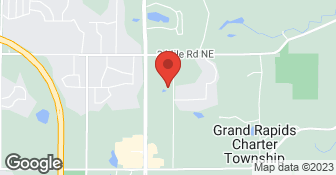 We are a full service landscape and excavation contractor, who can complete most service's in house, which allows you to work with one person for your complete project. We also are a licensed builder....

The first 2 years we used this company, the service was fine. Year 2013: I believe the owner hired and used someone new to plow our driveway and here's the order of the damage to our property over that winter: first snow: 2 - 3 inches - took out some sod at the top of our driveway. we picked out the grass and replaced. had to plant seed in a few of the areas the following spring 3rd snow fall - took out some of our ornamental shrubs by the driveway (cut the corner too close) - 2 of the shrubs were torn up enough that they needed to be pulled out and replaced (these shrubs were 17 years old and were doing great) Took out our mailbox on an extremely cold/snowy winter weekend - we put it back up Hit our garage doors - nice dents (3) that are still there today Hydraulic leak on the truck later in the season left fluid on our driveway and white garage doors After each incident, we contacted owner of company. There was the "yes, we'll take care of it" but received nothing for the losses. The driver never admitted to taking out the mail box and it wasn't until we called on the garage doors that the response was "yeah, I hit it". The owner said he had someone who could fix/replace it, but there was no follow up when spring/summer came. Needless to say, we've moved to another service this year. I do not recommend this company.

Does a really thorough job. Very responsive. I don't care if they charge $50 more per season than some other guy if they consistently make sure I get to work on time.

At Elite Masonry and Concrete we specialize in Everything masonry from drive ways to brick. We provide quality work done in a timely manner , we provide a clean job sight , and happy customers. I have been in this trade for over 5 years now doing masonry on a larger scale building hospitals , high schools , and college buildings. Unlike those companies elite masonry is a face to face interaction with respectful workers who will help you find what you are looking for in your next project .  …

Acculevel is your foundation repair expert, serving Indiana, Illinois, Kentucky, and Ohio and been in business since 1996. Most of our repairs come with a life of the structure warranty. Acculevel begins by evaluating your entire foundation system, checking your property for the signs and causes of foundation failure. From foundation & crawlspace repair to waterproofing & encapsulation systems, Acculevel can help you protect your home-- possibly the most valuable investment you'll ever make. A dry home is a healthy home. Acculevel is committed to providing the most technologically advanced repairs to help keep your home dry and on a safe foundation. A strong foundation protects your home's structure, lowers utility bills and maintains the value of your property. Check our pictures for the signs & symptoms of foundation & water damage, and then call Acculevel for your free visual inspection. 1-866-669-3349  …

We offer everything listed

How is Lawns of Distinction overall rated?

Lawns of Distinction is currently rated 3.5 overall out of 5.

What days are Lawns of Distinction open?

Lawns of Distinction is open:

What payment options does Lawns of Distinction provide

Lawns of Distinction accepts the following forms of payment: Check

Are warranties offered by Lawns of Distinction?

No, Lawns of Distinction does not offer warranties.

What services does Lawns of Distinction offer?

Lawns of Distinction offers the following services: We offer everything listed